Soldiers lives hang in the balance, depending on Col. Jettaka Signaigo’s personnel to get the correct mix of 22 items including medicines and sterile bandages into battlefield kits for medical technicians in Afghanistan and Iraq. (Terry Boyd / S&S)

Soldiers lives hang in the balance, depending on Col. Jettaka Signaigo’s personnel to get the correct mix of 22 items including medicines and sterile bandages into battlefield kits for medical technicians in Afghanistan and Iraq. (Terry Boyd / S&S) 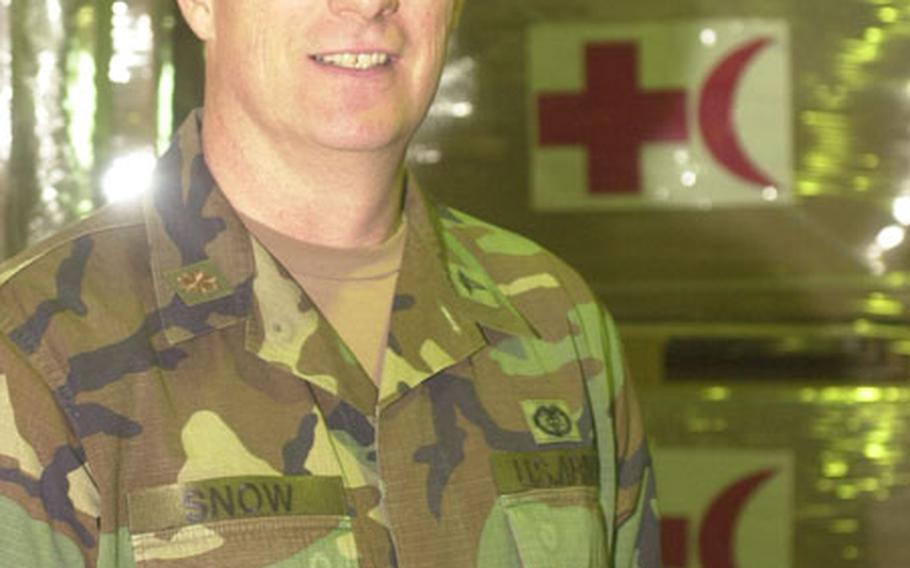 PIRMASENS, Germany &#8212; There are lots of hidden corners of the war effort where people toil in crucial, yet nearly invisible jobs.

There are few, if any, jobs like Col. Jettaka Signaigo&#8217;s, where a line can be drawn from the battlefield directly back to her desk.

Every time she watches the news about a military or civilian war casualty, &#8220;my prayer is asking that the [medics] found what they needed to save that person&#8217;s life&#8221; in the medical supplies her command sends out, said Signaigo, U.S. Army Medical Materiel Center, Europe commander.

If a packer forgets to include the saline solution, for example, &#8220;nothing is going to replace that fluid,&#8221; she said.

Considering the numbers, this operation would be the envy of any corporate boss pushing for a lean, mean operation. &#8220;We&#8217;re about as thin as you can get&#8221; and get the job done, Snow said.

From its headquarters and warehouses in Pirmasens, medical materiel command personnel supply 7,000 lines of goods to 770 customers. It fills the request from every medical operation &#8212; Army, Air Force and Navy &#8212; in Europe, the Middle East and Central Asia, which includes every hospital, such as Landstuhl Regional Medical Center about 35 kilometers north, every battalion aid station in Iraq and even to 239 U.S. embassies and consulates.

Medical material center employees brag that it would take a dozen companies to do what they do. They grind lenses for glasses. They order, pack and ship everything from hypodermic needles to modules that can be configured into hospitals with neurological capabilities.

The center looks more industrial than military; basically a high-volume fulfillment business akin to Internet retailers like Amazon.com. Rows upon rows of supplies line the central stock area of what is a four-part operation: receiving, stock, fulfillment and shipping.

While the enormity of the operation is impressive, nearly three acres are under one roof, the tiny details in an increasingly sophisticated combat treatment doctrine may test medical materiel command the most, said Signaigo and Brig. Gen. Elder Granger, commanding general, U.S. Army&#8217;s Europe Regional Medical Command, and U.S. Army Europe Command Surgeon.

No detail is left to chance. Workers putting together 2,000 Combat Life Saver bags for the 1st Armored Division, which is deploying to Iraq from Germany, work off photographs of what must be in specific kits, said Thomas Navo, chief of plans and programs.

The distribution system gives doctors and clinicians whatever they need from 41,000 listings, no questions asked, said Signaigo.

&#8220;If I get a call and the person says, &#8216;Hey, I need a bottle of XYZ,&#8217;&#8221; the center has the flexibility to call a hospital that has a bottle of XYZ sitting in its storeroom, said Sgt. Terrance Evans Alligood Jr., customer service and marketing branch Army Liaison.

Typically, it takes about 72 hours to fill an order. But recently, doctors on a ship in the Persian Gulf sent an emergency call for a particular antibiotic, and the center got it to them in 26 hours via a truck to the airport, through customs, to a helicopter and onto the ship.

&#8220;The calls that come in for the little bitty box on the shelf to the ship in the Persian Gulf in 24 hours or the person on the ship may lose their life&#8221; helps focus, said Snow, who had a one-year assignment at the Memphis, Tenn.-based Federal Express Corp.

The main difference between corporate and military is the way the medical materiel command uses its people.

Automatic picking systems simply can&#8217;t cope as well as humans with changes as simple as a supplier changing the 300 mg aspirin bottle from 100 tablets to 60 tablets, Snow said.

To execute, it takes a whole lot of people doing extraordinary work, he said.