Ukrainians training with US forces have their own lessons to share 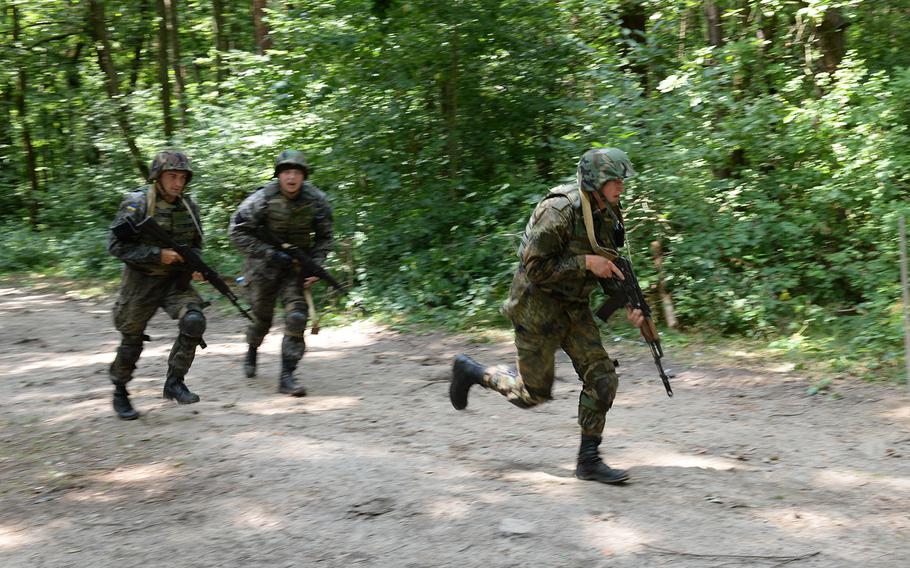 Ukrainian national guardsmen run across a simulated danger area July 9, 2015, at a training facility in Yavoriv, Ukraine. Since April, about 300 American paratroops have been training Ukrainian soldiers to fight against Russian-backed separatists in eastern Ukraine. (Jad Sleiman/Stars and Stripes)

Ukrainian national guardsmen run across a simulated danger area July 9, 2015, at a training facility in Yavoriv, Ukraine. Since April, about 300 American paratroops have been training Ukrainian soldiers to fight against Russian-backed separatists in eastern Ukraine. (Jad Sleiman/Stars and Stripes) 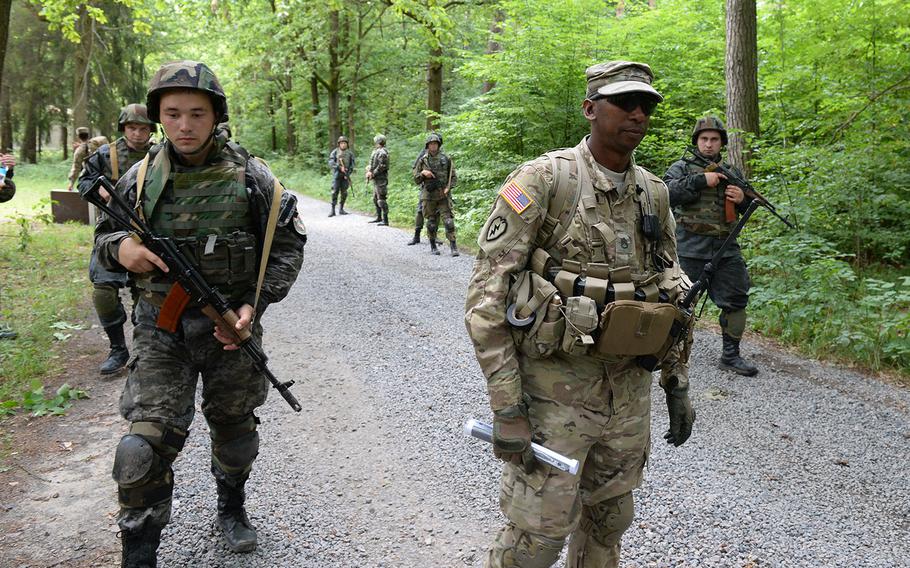 U.S. Army Staff Sgt. Gregory Simmons, center, supervises Ukrainian national guardsmen on a simulated patrol July 9, 2105 at a training facility in Yavoriv, Ukraine. The Pentagon is considering a plan to expand the training mission to include Ukrainian army soldiers. (Jad Sleiman/Stars and Stripes) 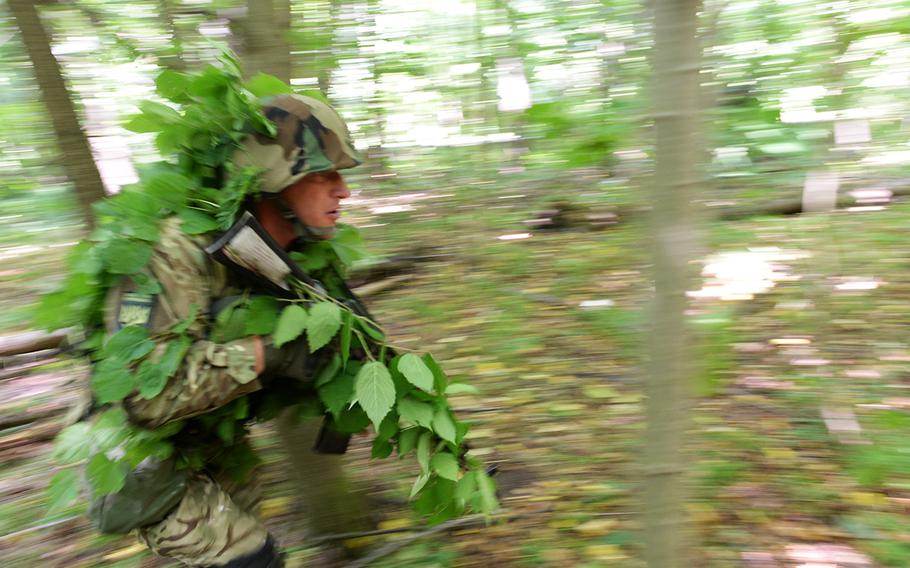 A Ukrainian national guardsman, wearing camouflage, reacts to a simulated attack July 9, 2015, at a training facility in Yavoriv, Ukraine. Because of its fight against Russian-backed separatists, Ukrainian forces have more recently used conventional warfare tactics than the U.S. soldiers sent here to train with them. (Jad Sleiman/Stars and Stripes) 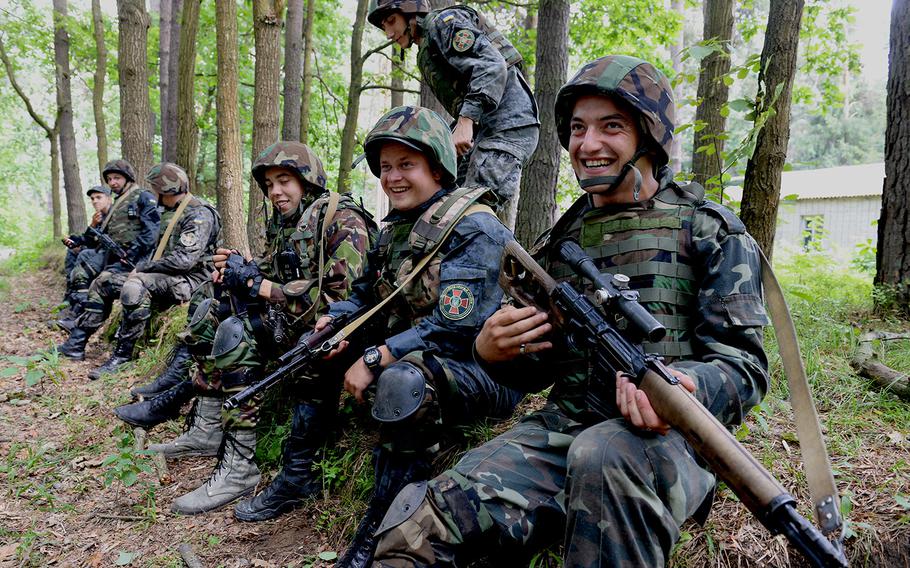 Ukrainian national guardsmen take a short rest during training with U.S. forces July 9, 2015, at a training base in Yavoriv, Ukraine. (Jad Sleiman/Stars and Stripes) 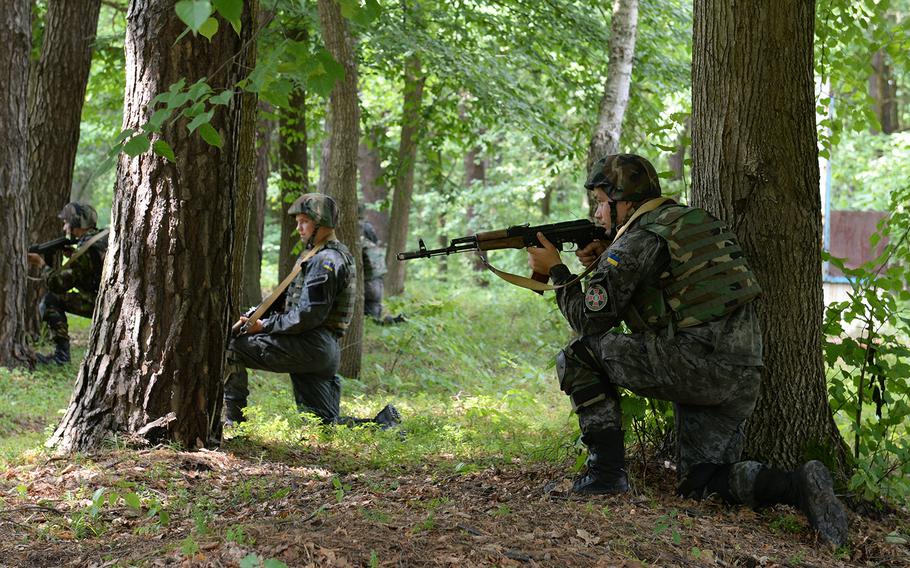 Ukrainian national Guardsmen post security at a simulated vehicle checkpoint July 9, 2015, at a training facility in western Ukraine. About 300 American paratroops in the country for training say they have been learning some conventional warfare tactics from their Ukrainian counterparts. (Jad Sleiman/Stars and Stripes) 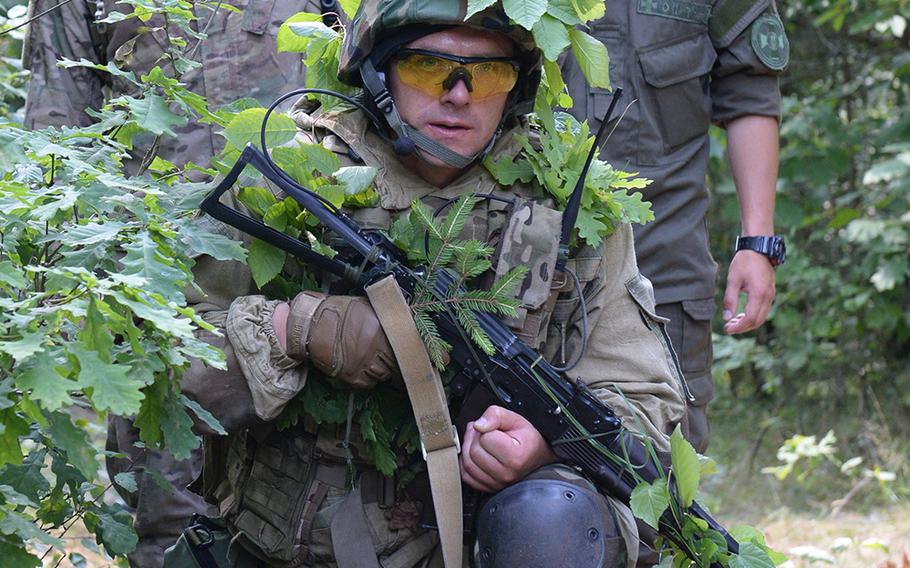 Cpl. Colt Smith, left, a paratrooper with the 173 Airborne Brigade Combat Team, and a Ukrainian translator stand behind a Ukrainian national guardsman undergoing training during a patrol July 9, 2015, at a training facility in western Ukraine. (Jad Sleiman/Stars and Stripes)

YAVORIV, Ukraine — With two combat deployments under his belt, U.S. Army Capt. Zachary Savarie came to western Ukraine to train local forces. He soon found his students had lessons of their own to share.

Savarie and about 300 other American paratroops with the 173rd Airborne Brigade Combat Team are in the midst of a six-month deployment to train hundreds of Ukrainian guardsmen to face Russia-backed separatists in eastern Ukraine.

But after more than a decade of counterinsurgency operations in Iraq and Afghanistan, the American troops here have little experience fighting a professional and technologically advanced foe.

The Ukrainian soldiers have been facing more conventional warfare since fighting in eastern Ukraine broke out last year.

“We face mostly Russian technology, because in the east, it is no secret that Russia is fully supplying and supporting the separatists,” said Vlad, a Ukrainian officer who requested partial anonymity to protect family still living in embattled Donetsk, a city under separatist control. “You must understand that any separatist force that we face are usually supported by a company of Russian regulars, what they like to call volunteers.”

Russia denies it has sent troops to fight in Ukraine, as it denies providing materiel support to the separatists.

Experts say the separatists in eastern Ukraine are demonstrating aspects of Soviet battle doctrine like massing troops across a wide front and employing overwhelming, accurate artillery fire. By contrast, the Taliban in Afghanistan and the insurgency in Iraq rarely attacked coalition forces in large numbers and lacked the indirect firepower to effectively challenge an American presence.

In contrast, the concentrated firepower employed by separatist forces in Ukraine has surprised Western analysts. In February, government troops suffered a stinging defeat when they were forced to abandon the fortified town of Deblatseve, a strategically key hub, after heavy shelling and repeated armored thrusts by the rebels. As the Ukrainian column retreated, it was ambushed and cut to pieces, resulting in many deaths and large numbers of captured troops.

Lt. Gen. Ben Hodges, commander of U.S. Army Europe told reporters at the Pentagon earlier this month that the Ukrainians have much to teach American forces.

“None of us have ever been under Russian artillery and rocket fire like the Ukrainians have,” Hodges said.

Sgt. 1st Class Jacob Hurt, another 173rd soldier, said he spent both of his deployments in the Hindu Kush mountains of Afghanistan, and the only mechanized armor he saw was on the American side.

Already, he said, he’s learned much from his students’ experiences.

“A Ukrainian platoon sergeant mentioned a time where he came into a direct fight with a BMP [Soviet-era infantry fighting vehicle] from 15 meters away,” he said. “They’ve attacked armor with anti-armor weapons from only 10 to 15 meters away, something we would have taught our soldiers is an absolute impossibility.”

Now in their second rotation in Ukraine, the American trainers have already tweaked their curriculum to recognize that the Ukrainian national guard forces — who are not generally posted to the front lines — are more weathered veterans than fresh recruits. As a result, what began as a beefed up basic training has expanded to include tips on how to counter drone surveillance.

“Here we learn about the same type of things we learned when we first joined [the guard], but in a more effective and extensive way,” said enlisted Ukrainian soldier Mischa, who also asked that his last name not be used. “Instead of doing the same drills day after day for example, we learn something and move on, so every day is different.”

Possible expanded Ukrainian army training could include counter-electronic warfare practices aimed at Russian jamming technology, according to The Associated Press.

The regular army, unlike the national guard, is specifically tasked with frontline combat duties. Their experiences could provide a valuable addition to the lessons American trainers have already learned from their current trainees.

The Obama administration announced Friday that the U.S. is planning to expand its training to include small-unit exercises for personnel from Kiev’s Defense Ministry. The State Department announced that the training would begin this fall in western Ukraine. It said the program will be similar to the training being provided to the national guard.

U.S. forces might face conventional war one day in the future, “and it might be one that has a paradigm that allows” for Soviet tactics, said Olga Oliker director of the RAND Corporation’s Center for Russia and Eurasia.

But U.S. airpower would make for a very different conflict than the Ukrainian government is engaged in, she said, and U.S.-Russian relations — while strained — are a long way off from the possibility of direct armed conflict.