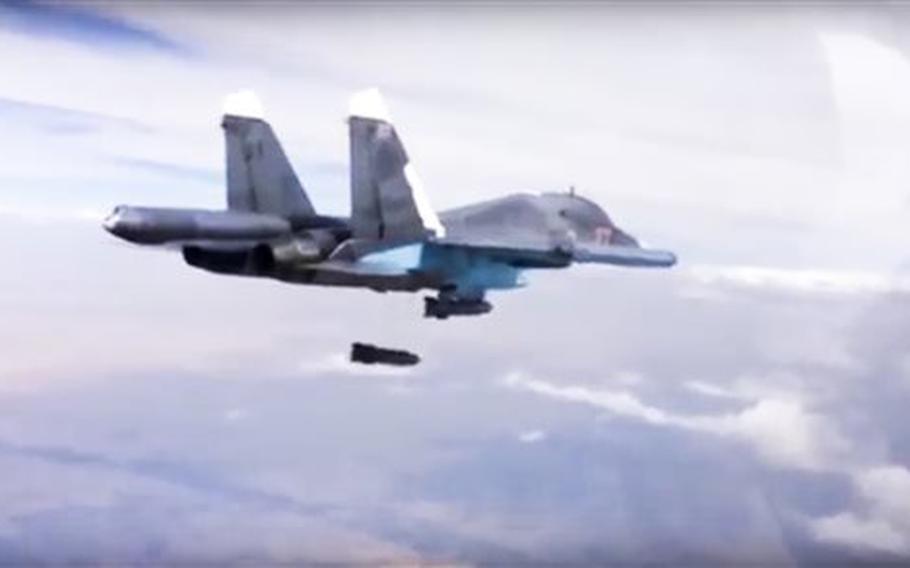 In this photo made from video footage provided by the Russian Defense Ministry on Wednesday, Dec. 9, 2015, a Russian Su-34 bomber drops bombs on a target. Russia has unleashed another barrage of airstrikes against targets in Syria, including the first combat launch of a new cruise missile from a Russian submarine in the Mediterranean Sea, the country's defense minister said Tuesday. (Russian Defense Ministry Press Service)

WASHINGTON — Russian-backed attacks on Ukraine have allowed the U.S. military to study Russian tactics and begin to incorporate the intelligence gathered into the training of American troops, the commander of U.S. Army-Europe said Wednesday.

Since Russian-backed forces invaded and annexed Crimea in March 2014, Ukrainian forces have faced Russian-trained soldiers and Russian-provided equipment and capabilities, including advanced electronic warfare and mortars. The heavy casualties suffered by Ukraine from the more advanced Russian attacks led some lawmakers in Congress along with other U.S. officials to call for helping Ukraine defend itself by supplying weapons.

The United States sent supplies, including some advanced radars, and advisers to train the Ukrainians in tactics, including evasion techniques.

What was learned from observations and information gathered from the Ukrainians on the latest Russian tactics was incorporated into the Joint Multinational Training Command Center in Hohenfels, Germany, said Lt. Gen. Ben Hodges, commander of U.S. Army-Europe.

“What we’re seeing from the Russians, they’ve got tiered, multi-leveled [drones] of all types, so they’re able to see us, just the way we’ve enjoyed that advantage of being able to see others. And of course they will have different kind of capabilities for intercept, jamming,” Hodges said. “We’re having to figure out, ‘How do you defeat that capability?’”

“We have already taken those lessons there and, in just a few months, we have already applied them back into our own training,” he said.

Retired Navy Cmdr. Chris Harmer, a senior military analyst at the Institute for the Study of War, said the advantage of the conflict in Ukraine is it provided U.S. forces their first real glance into Russian capabilities in decades.

“There is a silver lining that we can take a look at how they operate,” he said.

However, Harmer said the Russians are doing the same with U.S. forces in Syria, where the Russians are closely watching, and in some cases shadowing, U.S. drones and F-22 Raptor fighter jets to gather intelligence on U.S. capabilities.

“During the Cold War, the United States and Russia were extremely interested in each other’s [tactics, techniques and procedures] ... to see how they deployed, see how they operated,” he said. “It was all ostensibly done so if we ever went head-to-head against them, we’d have some idea of how [to fight them].”

Interest waned after the Cold War, though the conflicts in Ukraine and Syria have renewed it, Harmer said. The estimated 5,000 Russians now operating in Syria “are watching everything the U.S. air operations are doing,” he said.

“And we are having to relearn how to do some stuff,” Hodges said.

With Russian advances using drones, Ukraine has learned what types of drones are often accompanied by a rocket strike and how to better evade remotely piloted aircraft, Hodges said.

“It’s been a very long time since American soldiers have had to worry about an enemy up in the sky having the ability to drop bombs,” he said. “Our Air Force has protected us for decades.”

Hodges said the refocused training is about protecting U.S. forces against advances they have not faced.

“We have not had to worry about being jammed, being intercepted,” he said. “The Russians definitely have the capability to do that.”