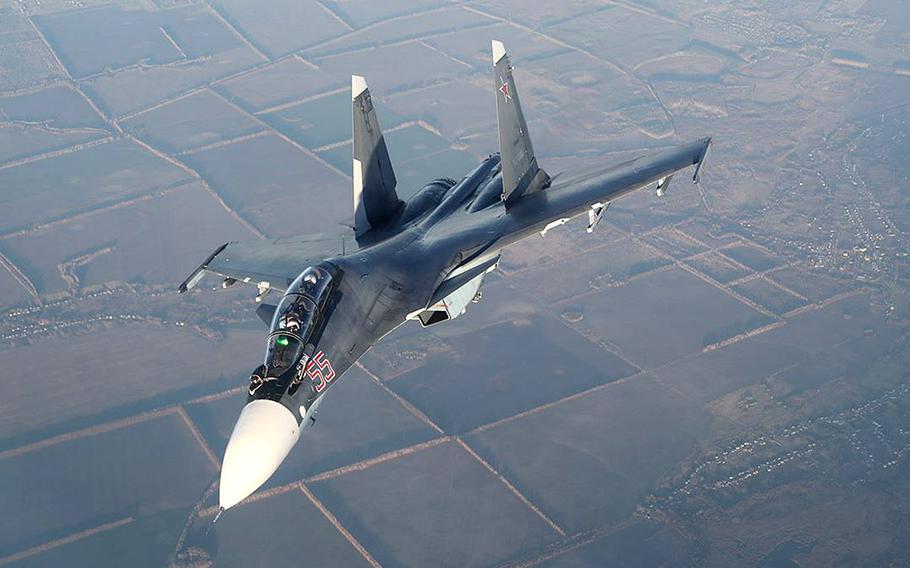 A Russian SU-30 fighter. Ukrainian media reported that it was a SU-30 that attacked Ukrainian ships in the Kerch Strait on Sunday. (Courtesy Russian Defense Ministry )

A Russian fighter-bomber fired two missiles at Ukrainian ships during Sunday’s naval clash, causing serious injuries to an officer aboard one of the vessels, Ukraine’s security services said Tuesday.

The injured officer was a member of Ukraine’s military counterintelligence office.

Vasyl Hrytsak, head of Ukraine’s security service, known as the SBU, said the “real amazement” was the size of the Russian military response during Sunday’s confrontation, which was larger than reported during the immediate aftermath of the attack.

“According to the confirmed SBU operative information, one of the Russian strike aircraft used two unmanned combat missiles against the Ukrainian boats, heavily wounding one of the SBU officers,” Hrytsak said in a statement.

The injured officer and about 22 merchants were taken into custody by Russian forces, who also seized the three Ukrainian vessels.

Ukraine has demanded that Moscow release the sailors but Russia has yet to oblige.

During the confrontation, a Russian ship also rammed a Ukrainian tugboat and Russian crews fired at the tugboat and two navy vessels. Russia’s Federal Security Service blamed Ukraine for the incident, saying its ships made an unauthorized passage through Russian territorial waters. Ukraine says it gave proper notifications.

Russian President Vladimir Putin will announce his stance on the incident “within the next few days,” Russia’s Tass news agency reported Tuesday.

The clash at sea, which marks the most significant military escalation between Russia and Ukraine since Moscow’s 2014 intervention in the country, happened near the Kerch Strait, which connects the Black Sea and Sea of Azov. The waterway is crucial for commercial ships heading to Ukrainian ports.

However, Russia’s control over the narrow chokepoint — Moscow has periodically cut off access to the strait and delayed the transit of hundreds of ships in recent months — has been a constant source of tension.

The latest confrontation prompted Ukraine to declare martial law on Monday, citing concerns that Moscow could be planning a ground invasion. The decision is intended to put troops at a higher state of combat readiness for 30 days in areas where Ukraine shares a border with Russia.

While Ukraine is not a NATO member, allies have condemned Russia’s use of force.

“What we saw yesterday was very serious because we saw actually that Russia used military force against Ukraine, in an open and direct way,” NATO Secretary-General Jens Stoltenberg said to reporters Monday. “So, this is escalating the situation in the region and it confirms a pattern of behavior that we have seen over several years.”

On Tuesday, NATO foreign ministers were scheduled to meet in Brussels to discuss the crisis.