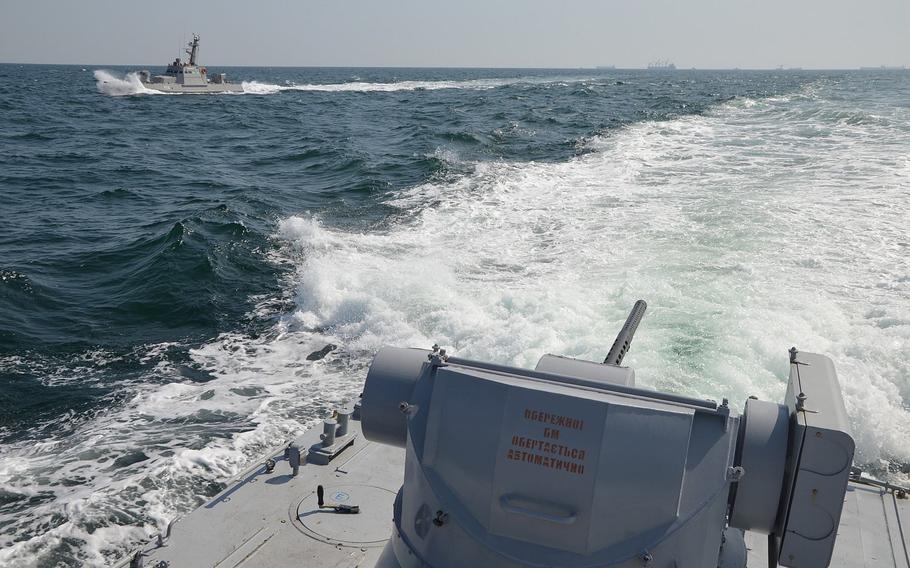 Ukraine's president declared martial law and NATO leaders gathered for emergency talks Monday, a day after a naval clash with Russian warships sparked one of the most serious military threats in the region in recent years.

Russian coast guard vessels fired upon and seized control Sunday of three Ukrainian vessels attempting to pass through the narrow Kerch Strait to the Sea of Azov, a clash that represents the largest escalation of force since Russia invaded and annexed Ukraine’s Crimean Peninsula in 2014 and launched a proxy war in Ukraine’s east.

The United States has since sold Ukraine weapons systems and participated in bilateral military exercises, while ramping up military operations along the U.S.-led NATO alliance’s eastern flank to reassure Russia’s neighbors.

The incident Sunday could serve as a prelude for a larger confrontation, security analysts cautioned.

“It seems like Russia is trying to put in place a new Iron Curtain across the Black Sea,” said retired Lt. Gen. Ben Hodges, who commanded the U.S. Army in Europe until leaving the service last year. “Everybody should have their eyes wide open.”

“The attack on the Ukrainian cutters is a Russian-planned element of escalation of the months-long situation in the Sea of Azov,” Poroshenko said. “I’m also sure it is far from the culmination. Intelligence reports discuss a serious threat of a ground operation against Ukraine.”

Ukraine said that a Russian ship rammed a Ukrainian tugboat on Sunday; afterward, Russian crews fired on the tugboat and two navy vessels, injuring six sailors, before seizing the ships.

Russia’s Federal Security Service said the Ukrainian ships made an unauthorized passage through Russian territorial waters and accused their commanders of failing to give proper transit notification, which Ukraine denied. Russian media said that only three Ukrainian sailors were slightly hurt.

The Russian Foreign Ministry accused Ukraine Monday of orchestrating a provocation as “a pretext for setting up sanctions against Russia,” according to a statement.

For the U.S. and its allies, the incident highlights the growing tensions around the Black Sea, which is vital to the economies of NATO’s southern members but also a place where there is a military mismatch with Russia.

“It not only raises the fears of another large-scale Russian military attack on Ukraine, it also creates concerns of Russia preparing for another attempt to gain more territory and seize the Ukrainian city of Mariupol,” said Jorge Benitez, a security analyst with the Atlantic Council think tank in Washington. The city, with a mixed Ukrainian-Russian population, is located on the north coast of the Sea of Azov close to the border with Russia.

NATO has looked for ways to bolster forces in the Black Sea region and has considered setting up a flotilla of warships that could counterbalance Russia’s sea power. So far, the idea of a multinational flotilla hasn’t gained traction amid concerns that such a move could antagonize Russia.

Given the lack of naval assets in the region, Black Sea NATO members Bulgaria, Romania and Turkey, along with partners like Georgia, should pool their assets, Hodges said.

Turkey, which is more focused on threats to the south emanating out of Syria, could be resistant, he said.

To offset weaknesses, more missile defense assets and drones with strike capability based in a country like Romania could be a way for allies to strengthen their hand, Hodges said, adding that “there needs to be a joined up effort.”

Benitez recommended that NATO should do what it has already done in the Baltics — establish a small multinational force to strengthen deterrence.

“So far, NATO’s response in southeast Europe is imbalanced and not as robust as in northeast Europe,” Benitez said. “Today’s aggression by Russia is a good opportunity for NATO to better balance deterrence across all its borders, not just the north.”

NATO Secretary-General Jens Stoltenberg “expressed NATO’s full support for Ukraine’s territorial integrity and sovereignty, including its full navigational rights in its territorial waters under international law,” according to a statement Monday.

Across Europe, leaders called on Russia to release Ukrainian sailors from custody, return the seized ships and de-escalate tensions.

In Kiev, Ukraine’s parliament also was deliberating on a plan to impose martial law for a period of 60 days, which would keep its military forces at a heightened state of readiness.

For months, tensions have been building between Russia and Ukraine in the Sea of Azov and the Kerch Strait, a waterway that connects Ukrainian ports to the Black Sea and then the Mediterranean.

Moscow, which recently constructed an 11-mile road and rail bridge over the strait that connects the Russian mainland to the Crimean Peninsula, has imposed what some experts have described as a de facto blockade, as it now controls when ships can pass through. This also gives Moscow leverage over Ukraine and its struggling port cities along the Sea of Azov.

Michael Petersen, director of the Naval War College’s Russia Maritime Studies Institute, said the latest confrontation is part of an effort to isolate Ukraine and force it to deal on Moscow’s terms.

“Russia is not looking specifically to pick a fight with the West, though they know that there may be a price to pay,” Petersen said. “Moscow recognizes that there will be blowback from this, but also that the long-term value of isolating Ukraine is worth the short-term cost of this incident.”

The West has condemned Moscow’s increasing control over maritime traffic and harassment of commercial vessels in the area.

In September, Kiev announced plans to establish a naval base on the Azov, and Washington has said it is mulling more military assistance for Kiev to counter Russia’s actions.

So far, however, the Trump administration has said little about the latest escalation. But Washington’s special envoy to Ukraine, Kurt Volker, took to Twitter Monday: “Russia rams Ukrainian vessel peacefully traveling toward a Ukrainian port. Russia seizes ships and crew and then accuses Ukraine of provocation???”

Stars and Stripes reporters Scott Wyland and Chad Garland contributed to this story.