Ukraine leader hopeful country will continue to have US backing 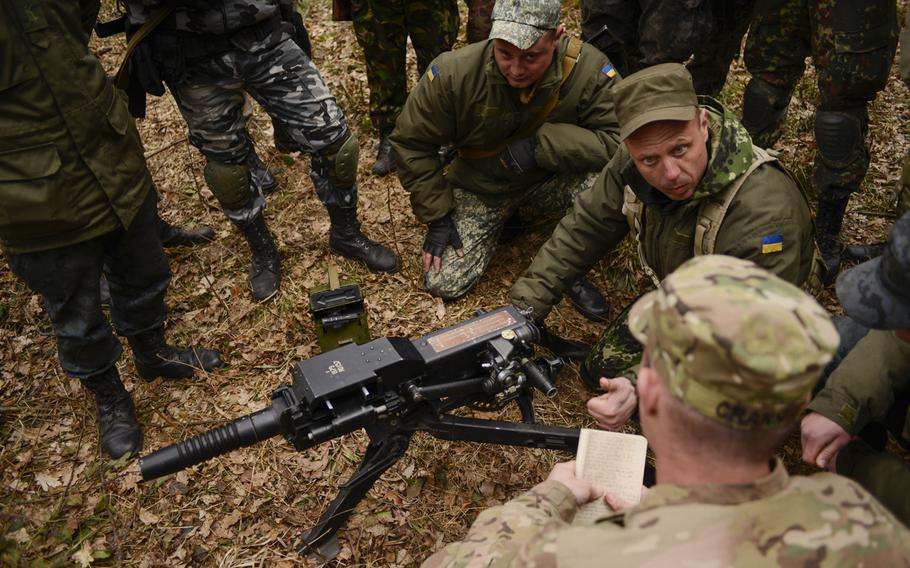 Ukrainian soldiers go over basic weapons procedures with a soldier from the 173rd Airborne Brigade on April 21, 2015, the first day of training in Yavoriv, Ukraine. (Joshua L. DeMotts/Stars and Stripes)

Ukrainian soldiers go over basic weapons procedures with a soldier from the 173rd Airborne Brigade on April 21, 2015, the first day of training in Yavoriv, Ukraine. (Joshua L. DeMotts/Stars and Stripes) 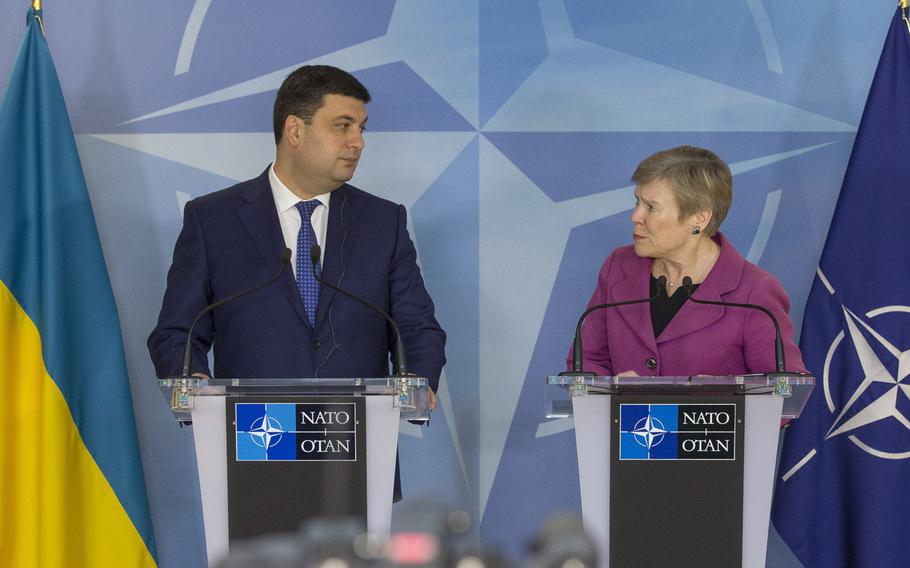 The United States under President Donald Trump is unlikely to abandon Ukraine, a country at war with Russian-backed separatists, in favor of closer ties with Moscow, Ukrainian Prime Minister Volodymyr Groysman said Thursday.

“I do believe the United States of America will always support justice. And I think justice is on the side of Ukraine,” Volodymyr Groysman said during a news conference Thursday at NATO headquarters in Brussels.

Groysman, who was in Brussels to discuss NATO efforts to support Ukraine’s security services, said he was not concerned that Trump’s stated desire to establish warmer relations with Russia would result in Ukraine being left to its own devices.

“He (Trump) is a leader and he will always fight for democracy and democratic values” Groysman said.

Since Russia’s 2014 intervention in Ukraine, the U.S. along with allies in Europe, have joined in sanctions against Moscow. U.S. troops have been a common sight in Ukraine’s west, where the Army has been leading an effort to train Ukrainian regular and special operations units.

But questions about the longevity of those commitments have emerged given Trump’s desire to work more closely with Russia.

On the campaign trail, Trump played down the importance of Ukraine to the U.S. and said it was a matter for countries such as Germany to deal with. More recently, Washington has staked a more familiar position with U.S. ambassador to the United Nations Nikki Haley, castigating Russia for its support for the separatists.

Still, some experts say a general sense of confusion has contributed to the latest escalation in violence.

“Renewed fighting in eastern Ukraine in the first weeks of ... Trump’s administration has laid bare fears in Europe’s east about Russia’s declared intent to restore its former dominance in the region — and about whether or not the U.S. will continue to provide a counterweight to Moscow’s assertiveness,” said a report last week by the International Crisis Group.

In recent weeks, Ukraine has experienced some of its worst fighting since hostilities began in 2014 in the east of the country.

While violations of a ceasefire deal between Ukrainian forces and separatists have been frequent, they reached a pitch last week when the Organization for Security and Cooperation in Europe registered more than 10,000 violations in a single day. Ukraine and Russia have accused each other of starting the fighting.

“We have seen the heaviest fighting in the past two years. We must not accept this as the new normal,” said NATO Deputy Secretary General Rose Gottemoeller.

Gottemoeller said Russia continues to be a destabilizing force in the country, and added NATO will not recognize Moscow’s annexation of Ukraine’s Crimea peninsula.

“Since Russia’s aggressive actions began three years ago, NATO has stood by Ukraine. This will not change,” she said.