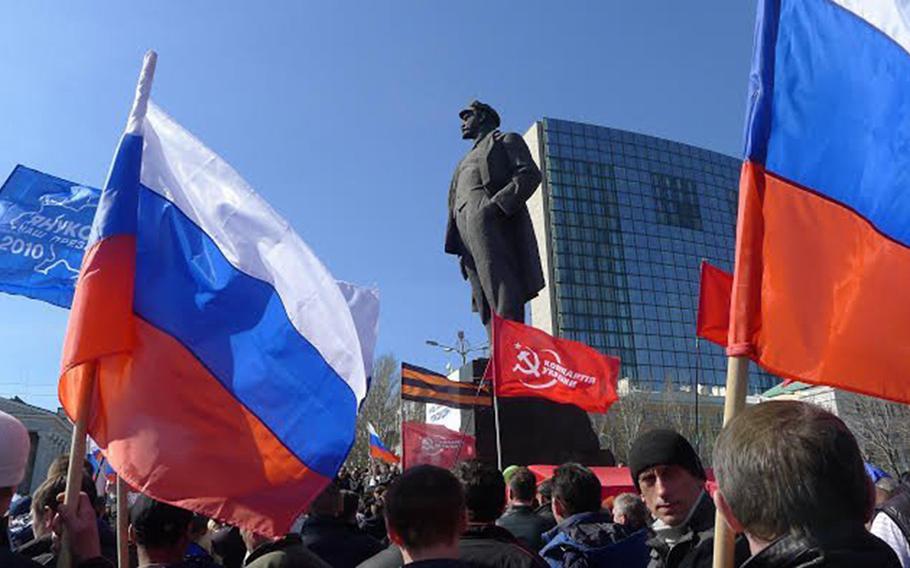 Russia's annexation of Crimea, made official on March 21, 2014, has not ended agitation for closer ties to Russia in other parts of Ukraine. On Saturday, March 22, 2014, about 5,000 people staged a rally in Donetsk, a major city in east Ukraine, to advocate closer ties for the region with Russia, and not the European Union. (Roy Gutman/MCT)

STUTTGART, Germany — The seizure of Crimea could become the first in a series of power plays by an emboldened Vladimir Putin to redraw post-Cold War lines, unless the United States and its allies impose severe economic penalties against Russia and bolster their defenses in the east.

That’s the view of some analysts, who say Europe is unlikely to stomach the costs of necessary sanctions and military options that would deter Russia from future land grabs.

“The U.S. has made a reasonable start here, but just how far is this going to go and do we have the appetite to inflict a higher level of pain? Damaging the Russian economy is going to hurt us as well,” said John Lough, a Russia expert at the Chatham House in London. “The Russian appetite for pain could be higher than ours.”

The U.S. and the European Union will phase in sanctions, which include immediate suspension of talks on closer economic cooperation between Europe and Russia, and a freeze on assets and travel for a small number of Russian figures. Those measures will expand if Putin signs a treaty to annex Crimea, EU leaders said.

But expanding economic sanctions to include Russia’s vast petrochemical industry could threaten an energy-dependent Europe, which is only beginning to emerge from years of economic stagnation.

Germany, Europe’s economic powerhouse, would be especially affected because of its close business ties to Russia, which involve the auto industry and energy interests. As a result, business leaders have been lobbying against tough measures.

“Germany will be harder hit than almost all other countries” by sanctions, especially if Putin retaliates by halting gas shipments, Holger Schmieding, chief economist at Berenberg Bank in London, told Bloomberg News. “A stop of Russian energy imports throughout next winter — that would stall the European and the German economic recovery.”

In response to more extensive economic sanctions, Russia could look east to China as an alternative market, leaving Europe in the lurch.

A week after Russia’s annexation of Crimea, there is no sign that limited Western sanctions, and threats of more to come, have caused Moscow to reconsider its intervention in Ukraine. But there are signs that Putin could already be looking beyond the peninsula.

Russia has been building up forces along its eastern border with Ukraine, prompting worries that its troops could soon march across the heart of that country to seize Trans-Dniester, a breakaway enclave in neighboring Moldova that is home to a Russian-speaking population.

“There is a danger that if Russia’s leaders continue to think that Western countries are less-than-committed to supporting Ukraine, they will think they can get away with doing more,” Lough said.

Even if Russia moved to claim Trans-Dniester, a Western military intervention against any Russian offensive would be virtually inconceivable given the fact that Moldova is not a NATO member.

Still, the crisis in Ukraine has galvanized NATO in recent weeks as the alliance ratcheted up operations near Russia’s border. These include an air policing mission in the Baltics and the deployment of surveillance aircraft along Ukraine’s western border. NATO also is examining the need to reposition forces in other parts of eastern Europe.

Since the mid-1990s, NATO has been expanding eastward, taking in Moscow's former Warsaw-pact allies, as well as the Baltic counties of Lithuania, Latvia and Estonia, which like Ukraine had been integral parts of the Soviet Union.

NATO Secretary-General Anders Fogh Rasmussen, speaking in Brussels on Friday, described Russia’s actions in Ukraine as a game-changing event and a “wake-up call” for Europe as a whole.

“Our vision of a Europe whole, free and at peace has been put into question because this is not an isolated incident,” Rasmussen said.

The redeployment of forces is an important step in trying to deter more Russian aggression and will reassure wary NATO members, such as Poland, experts say. What isn’t clear is how such NATO posturing could dissuade Russia from conducting interventions in other regions that don’t enjoy the NATO security guarantee, known as Article 5, which ensures that an attack on one member would trigger a collective response.

“Article 5 is iron-clad, but when it goes beyond that, it gets much more complicated politically. There will be differences in the alliance about how forward-leaning it wants to be,” said Ian Lesser, an expert with the German Marshall Fund of the United States.

Beyond the debate over sanctions, if the crisis in Ukraine persists, it will force a re-examination of how U.S. military forces in Europe are positioned as well as spark a debate over nuclear and arms control strategies, Lesser said.

If economic sanctions must be the primary tool to deter Russia, experts say, NATO’s efforts to reassure alliance members in the east are also a key aspect in countering Russia.

“I think there are things NATO can and will do to deter Russia,” Lesser said. “This is opening up a whole set of conversations that go from crisis management to grand strategy. None of this will be settled anytime soon.”

NATO’s Article 5 security pact all but rules out a Russian incursion into the former Warsaw Pact members and Baltic republics. Russian military intervention in those countries would be tantamount to launching a large-scale war. However, other non-NATO states such as Georgia, which fought a brief war with Russia in 2008, and Moldova could be viewed as fair game by Putin if he sought to reassert himself in areas that once fell under the Soviet Union.

Those ambitions could only grow if the West failed to take concrete measures such as harsh economic sanctions, analysts say. In addition, the U.S. should bolster military aid to countries at risk of Russian intimidation, according to the global security firm STRATFOR.

“A failure to engage at this point would cause countries around Russia’s periphery, from Estonia to Azerbaijan, to conclude that with the United States withdrawn and Europe fragmented, they must reach an accommodation with Russia,” wrote George Friedman, chairman of STRATFOR, in a Tuesday analysis. “This will expand Russian power and open the door to Russian influence spreading on the European Peninsula itself.”

Attack helicopters, communications systems and anti-missile technology should be sent to countries to counter a growing Russian threat, Friedman said.

“The United States has an interest in acting early because early action is cheaper than acting in the last extremity,” he said.

Lough says that Russia’s commodity-based economy would be vulnerable to sustained economic pressure from the West, but that Europe must be willing to pay the short-term costs of such action. So far, there are few signs Europe has the appetite for such a confrontation.

“We’re still in the early stages of this crisis,” Lough said. “What’s at stake is the independence of a country (Ukraine) that is pivotal to European security. It’s a mistake to think we can ignore what the Russians are doing.”