Ukraine crisis brings Europe security back to the forefront for US 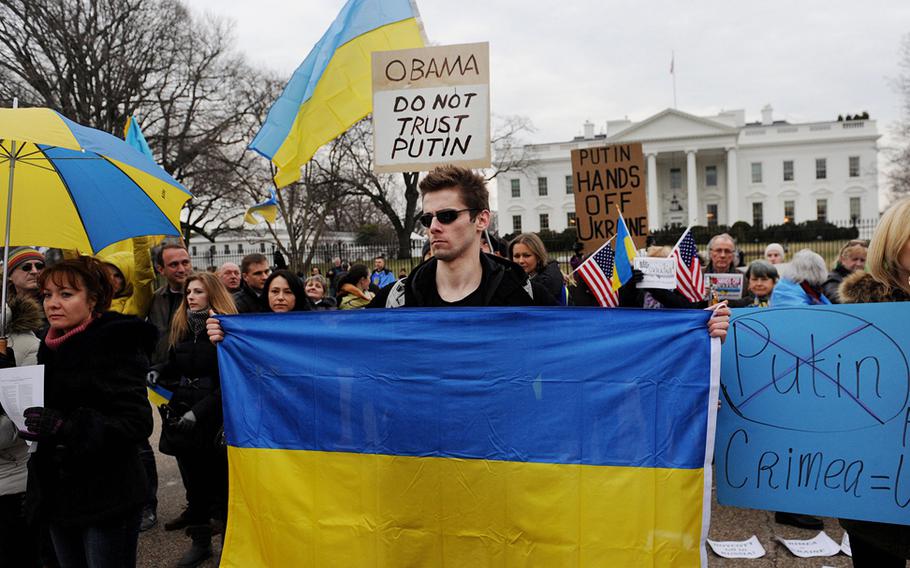 Protesters gather outside the White House to call on the U.S. and European Union to do more to combat Russian aggression in Ukraine's Crimea on Saturday, March 1, 2014, in Washington, D.C. (Olivier Douliery/Abaca Press/MCT)

STUTTGART, Germany — While there is no sign that NATO is girding for a military confrontation, Russia’s intervention in Ukraine could pull Europe off America’s strategic back burner as Western leaders confront what some are calling Europe’s biggest crisis in a generation.

“Europe is without a doubt in the sharpest crisis since the (Berlin) Wall came down,” German Foreign Minister Frank-Walter Steinmeier told reporters on Monday ahead of meetings in Brussels. “Twenty-five years after the end of the confrontation, the danger of a new division of Europe is real. Daily, the situation in Ukraine intensifies further.”

Indeed, Russia’s deployment of troops in Ukraine could prompt the very thing Russian President Vladimir Putin has long wanted to avoid: renewed U.S. focus on the security challenges in Europe.

For two decades the Pentagon has steadily been drawing down its forces on the Continent, arguing that such a strong presence was no longer needed after the end of the Cold War and dissolution of the Soviet-led Warsaw Pact military alliance.

In eastern Europe, former Warsaw Pact members that now belong to NATO are watching the events in Ukraine unfold with alarm as old Cold War anxieties intensify. Long leery of the Obama administration’s “reset” with Russia, Polish parliamentarian Witold Waszczykowski said on Monday he would like to see NATO deploy military assets to Poland — which shares a border with Ukraine — in a show of support. Just as NATO now has troops in Turkey to protect its ally from possible missile incursions from Syria, the alliance should bolster support for Poland, Waszczykowski said.

“We hope for this kind of support right now,” Waszczykowski said by phone. “Not because we have an immediate threat, but we are frightened. We at least need some kind of reconnaissance support to monitor what is going on beyond our border.”

The Obama administration and its European allies are now facing a host of challenges as they attempt to persuade Russian President Vladimir Putin to reverse course while also reassuring eastern European allies. Putin has ignored calls from the West to pull out of Ukraine even as he faces potential economic sanctions and other measures aimed at isolating Russia.

But beyond diplomatic and economic penalties, the West sees few options.

Some U.S. lawmakers say the Obama administration should restore a scrapped missile defense plan for Europe that called for long-range interceptors in Poland. In 2013, Obama scaled back U.S. missile defense plans on the continent in a move that critics decried as a capitulation to Russian concerns.

“Russia backed Obama down. If I were President Obama, I would re-engage Poland and the Czech Republic regarding missile defense,” Sen. Lindsey Graham, R-SC, Sunday said on CNN.

NATO called on Russia to pull back its forces and urged Russia and Ukraine after a meeting Sunday of the North Atlantic Council — the alliances top decision-making body — to “seek a peaceful resolution through bilateral dialogue.” Meanwhile, the alliance’s former top officer recommended that NATO take a series of steps, including drawing up contingency plans based on a full Russian invasion of Ukraine. In an essay published Saturday on the Foreign Policy website, retired Adm. James Stavridis said NATO should also put its response force on a higher state of alert.

“Many will consider any level of NATO involvement provocative and potentially inflammatory,” wrote Stavridis, who retired last year as NATO’s supreme allied commander. “Unfortunately, the stakes are high and the Russians are moving. Sitting idle, without at least looking at options, is a mistake for NATO and would itself constitute a signal to Putin — one that he would welcome.”

Other experts, however, said the U.S. should refrain from any actions that could be seen as a military escalation.

“I strongly oppose any military responses, even indirect, to the current situation,” said Michael O’Hanlon, a defense expert at the Brookings Institution in Washington. “It’s simply not worth the risk, and not necessary.”

In Europe, where about 70,000 U.S. troops are deployed, the U.S. military serves multiple purposes, offering a forward presence that positions forces to respond to contingencies in the Mideast and Africa or to enable the U.S. military to train alongside partner militaries for operations in places such as Afghanistan. Only weeks ago, the need for a military deterrent that reassures wary allies might have been dismissed as lingering Cold War paranoia, but now such sentiments strike a different chord amid fears Moscow aims to redraw the borders in Ukraine.

A decadelong shift away from Europe has produced angst in some corners, said Waszczykowski.

“I think that the process (of disengagement) started at the end of the Bush administration. They thought the project Europe was a done deal, and Obama was a continuation of that,” he said. “I think that was a naïve policy. Only half of this continent is a done deal.”