Uka's lawyers to focus on his youth, impact of video games 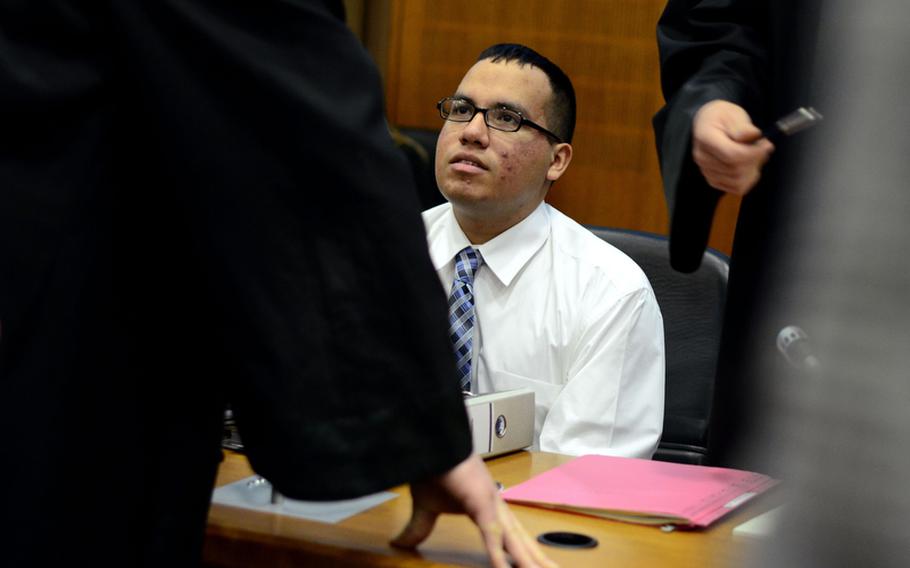 U.S. Air Force Senior Airman Edgar Veguilla, one of the airmen wounded while boarding a bus at Frankfurt Airport in March, prepares to testify Monday afternoon in the trial of Arid Uka, the 21-year-old Kosovo Albanian charged with two counts of murder and three counts of attempted murder. (Joshua L. DeMotts/Stars and Stripes)

U.S. Air Force Senior Airman Edgar Veguilla, one of the airmen wounded while boarding a bus at Frankfurt Airport in March, prepares to testify Monday afternoon in the trial of Arid Uka, the 21-year-old Kosovo Albanian charged with two counts of murder and three counts of attempted murder. (Joshua L. DeMotts/Stars and Stripes) A blue U.S.Air Force bus is towed from Frankfurt airport's Terminal 2 after a shooting that killed two airmen on March 2. (Michael Abrams/Stars and Stripes) 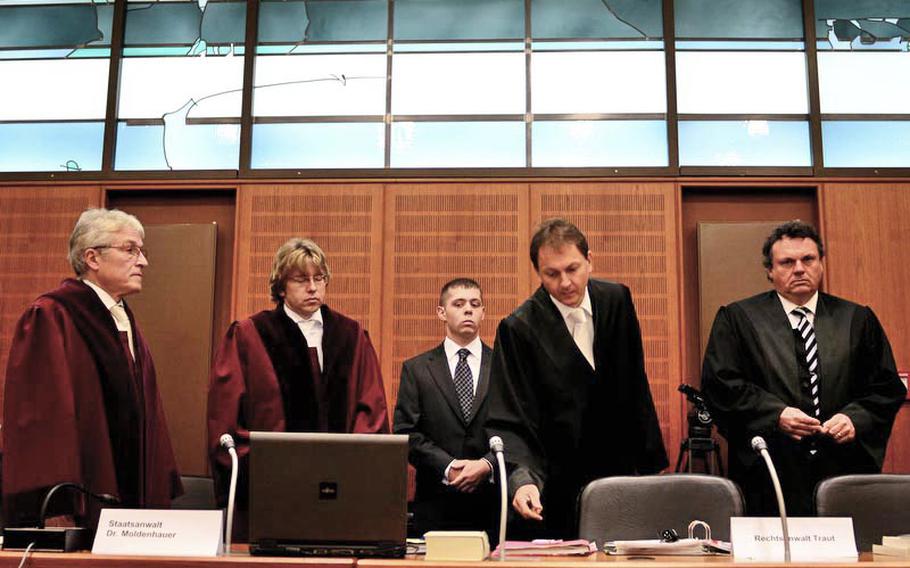 HEIDELBERG, Germany - Lawyers in the trial of Arid Uka, the man charged with murder in the shooting deaths of two U.S. airmen at Frankfurt Airport in March in what prosecutors called "his own personal jihad," are expected to make their closing arguments on Monday.

Prosecutors will try to convince the three judges deciding the case and handing down Uka's sentence later in the month that the 21-year-old Kosovo Albanian is guilty as charged in the March 2 shooting, and that he should be sentenced to life.

Defense lawyers will highlight Uka's youth and immaturity and what they say was the effect on Uka of Internet propaganda coupled with violent computer games he played.

"With the games, how easy it is to kill somebody," Uka's lawyer, Jens Joerg Hoffmann, said. "You just push the reset button."

Hoffmann also said he would argue that had Uka committed the killings a few months earlier, before he turned 21, he might have been tried in the juvenile justice system and faced a far lower possible sentence.

Hoffmann also said that in light of the facts and expert psychiatric testimony last month finding Uka criminally responsible in the shooting, the defense had "little room to maneuver."

Lawyers representing families of the dead and wounded are also expected to make statements. The lawyers have said they would argue for Uka to receive an extra-long sentence based on his "severe guilt" and the number of victims.

A murder conviction in Germany carries a life sentence, with parole eligibility at 15 years. Germany does not sentence people to death, nor does it impose life sentences without possible parole. Findings of severe guilt would extend the time before parole was possible, perhaps by five years, German legal experts have said.

The trial began in August with Uka confessing to the shooting, saying he had wanted to prevent U.S. troops from raping Afghan girls. He said he was influenced by Internet propaganda, including scenes he watched online from the movie "Redacted," which was about the actual rape and killing of an Iraqi girl and her family by U.S. soldiers.

According to trial testimony, Uka shot Senior Airman Nicholas Alden, 25, of Williamston, S.C., in the head as he stood outside a bus bound for Ramstein Air Base en route to a deployment in Afghanistan. Alden, a military police officer, was married with two children.

Uka then boarded the bus and, according to testimony from airmen on board, said, "Allahu akbar," or "God is great" in Arabic, before shooting the bus driver, Airman 1st Class Zachary Cuddeback, 21, of Stanardsville, Va., in the temple. Both Alden and Cuddeback died.

Uka is also accused of shooting Staff Sgt. Kristoffer Schneider, 25, of Irwin, Pa., in the head, leaving him blind in one eye and with numerous neurological problems. Schneider testified by video link from the U.S. earlier in the trial.

Senior Airman Edgar Veguilla, from Wichita Falls, Texas, was less seriously wounded and testified that he had fully recovered.

A third attempted murder count involved Staff Sgt. Trevor Brewer, 23, who testified that Uka had shot twice at him but the gun had jammed both times. Brewer told the court he'd looked into Uka's eyes, and when a judge asked what he saw, Brewer replied, "Hate. Disgust almost."

In June, U.S. federal prosecutors filed murder and terrorism-related charges against Uka in federal district court in Manhattan. Officials have declined to say whether they were seeking Uka's extradition.