UK airmen, families taking a pounding at the register 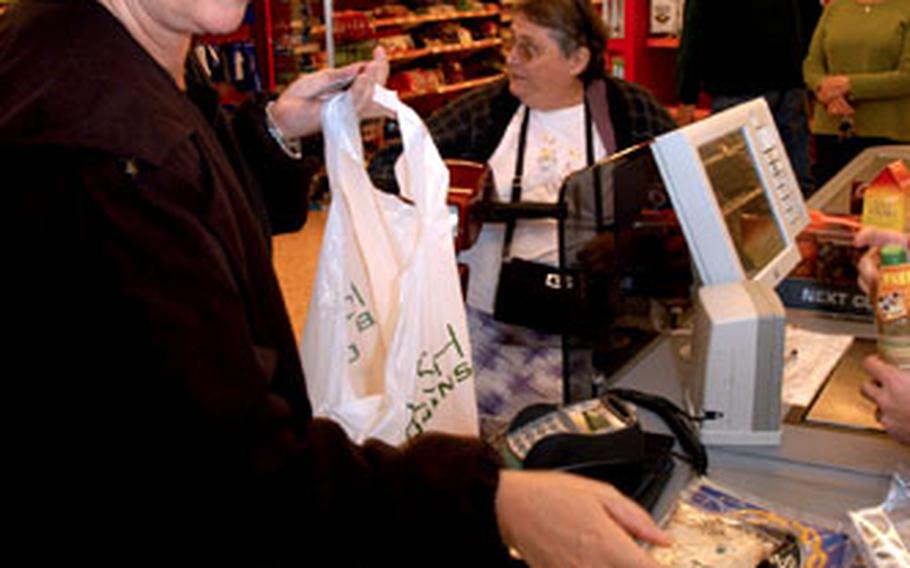 Dawna Webb buys groceries at Budgen’s in downtown Mildenhall. Webb, who lives in Mildenhall with her husband, said she buys most groceries at the base commissary to save money and goes to local stores only for things she can’t find on base. (Russ Rizzo / S&S)

RAF MILDENHALL &#8212; Airman Cassey Burington arrived in England this fall, bright-eyed and bushy-tailed for her first assignment with the Air Force. She was prepared for new accents, strange driving customs and even the rumored bad food.

Then came the sticker shock.

During a weekend trip to London, Burington got her first taste of just how little the U.S. dollar buys in this country.

Burington&#8217;s experience is typical for airmen arriving in England, where the British pound is worth nearly double the U.S. dollar.

The result? Airmen and spouses said they adjust by changing their spending habits. They shop almost entirely on base, cut back on eating out and restrict travel to places they can visit on one tank of gas. When they can&#8217;t find clothes and electronics they want at the base exchange, they shop online.

The U.S. dollar&#8217;s weakness against the British pound is nothing new. It has been worth more than $1.50 on average every year but one in the past decade and has not dropped below a monthly average of $1.70 since November 2003, according to the Bank of England. At print time, the exchange rate hovered just below $1.80 for one pound.

But for airmen just arriving, the prices can come as quite a shock.

Airman 1st Class Tracy Cisco, who recently arrived from Frederick, Okla., first learned how little her U.S. dollars were worth on a trip to a shopping mall in Norwich, about 45 minutes east of RAF Mildenhall.

For others, a trip to Chili&#8217;s restaurant in Cambridge crystallizes what a strong British pound means to their wallets filled with U.S. dollars.

There, a regular Oldtimer hamburger costs 7.95 pounds. That&#8217;s the equivalent of about $14, which is more than double the price at most Chili&#8217;s restaurants in the States.

Sandra Ostrom, wife of RAF Mildenhall-based Tech. Sgt. Dan Ostrom, said prices in England took her by surprise when she arrived here from McGuire Air Force Base in New Jersey four months ago.

To adjust, Ostrom said she shops on base and watches her finances more closely than before.

While she still gets out and enjoys England, Ostrom said she has made sacrifices to balance the budget. She and her husband planned to visit Scotland but reconsidered because of gas prices off base.

For Shannon Luina and her husband Scott, a special agent with the Office of Special Investigations at RAF Mildenhall, the weak dollar means more meals at home and less entertainment.

Families living off base and out of military housing feel the greatest sting from a weak exchange rate when they pay monthly bills.

Carla Gordon said she paid about 225 pounds each month in utilities when she and her husband lived in Methwold, just north of Mildenhall. On the current exchange rate, that&#8217;s about $400. An increase of 10 points in the exchange rate meant the Gordons paid an extra $25 a month.

&#8220;It just starts adding up when you&#8217;re dealing with pounds and the exchange rate,&#8221; said Gordon, wife of Senior Airman Gregory Gordon, who works in the 100th Logistics Readiness Squadron at RAF Mildenhall.

For single airmen living on base with few bills, the biggest consideration is how much they want to spend on recreation, whether it&#8217;s going to local pubs or traveling to new areas.

&#8220;I don&#8217;t go out nearly as much as I used to,&#8221; said 22-year-old Airman 1st Class Michael Noffke, echoing the sentiment of most of the dozen airmen and spouses interviewed for this story. Most said they were still happy to be in England despite the cost.

Others said the exchange rate hasn&#8217;t slowed them down.

Burington said she falls in the latter category.