Uhle takes over as leader of Wolf Pack 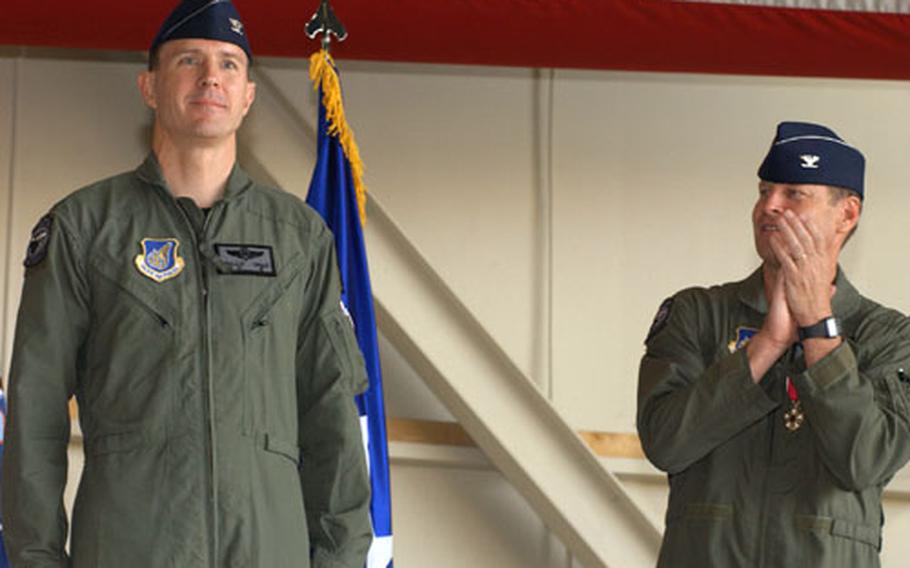 Air Force Col. William W. Uhle Jr., left, is prsented as new commander of the 8th Fighter Wing at Kunsan Air Base during ceremony there Thursday morning. At right of photo is Col. Robin Rand, who until Thursday commanded the wing for the past year. (Courtesy of USAF)

He had been vice commander of the 20th Fighter Wing at Shaw Air Force Base, S.C.

In brief farewell remarks to some 600 people, Rand praised the Wolf Pack&#8217;s airmen and told Uhle to savor his new assignment because the year&#8217;s duty would pass quickly.

Trexler noted that Rand had &#8220;championed&#8221; steps that increased the wing&#8217;s capabilities in using precision-guided munitions, improved its flight training and boosted the quality of life on base &#8212; which included construction projects for new dorms, a fitness center and commissary.

&#8220;There is simply no doubt in my mind that it takes a special commander to maintain combat readiness while taking great care of his airmen,&#8221; Traxler said. &#8220;Robin Rand has been such a leader.&#8221;

Uhle told the audience he looked forward to leading the Wolf Pack.

Noting that the wing&#8217;s mission includes being ready to defend South Korea against attack, Uhle called on airmen to &#8220;fully embrace the mission by adopting a habit of excellence, by committing to making the Wolf Pack and Kunsan &#8230; better during your tour, and by, at all times, maintaining&#8221; Air Force standards.

Uhle is a command pilot with more than 2,450 flight hours, 145 of them in combat, according to the Air Force. He was commissioned in 1981 through the Air Force Reserve Officer Training Corps. His past assignments include flying and staff jobs in Japan, Turkey, Saudi Arabia and the United States.

He&#8217;s served as chief of the Weapons Requirements Division at Air Force headquarters, director of combat operations with the Joint Task Force-Southwest Asia and has commanded an operational test and evaluation squadron of F-16Cs, F-15Cs and F-15Es. He was also a NATO staff officer.