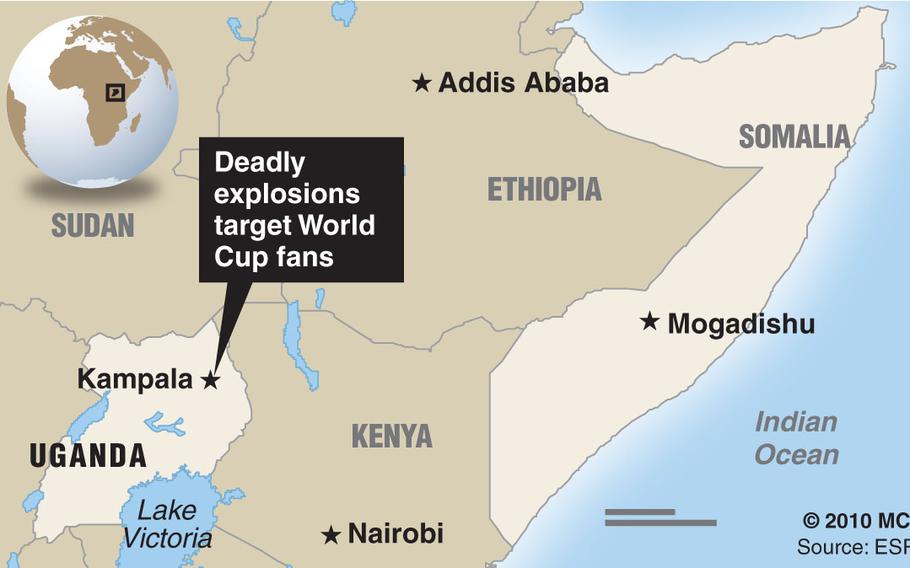 STUTTGART, Germany &mdash; The synchronized bomb attacks in Uganda carried out by the Somali militant group al-Shabab marks a troubling new front in al-Shabab&rsquo;s campaign to isolate the U.S.-subsidized transitional government in war-torn Somalia, according to some analysts.

More than 70 people were killed in the two bombings on Sunday, which targeted large gatherings of soccer fans watching the World Cup final.

The Somali militant group, which has al-Qaida links and has been declared a terrorist group by the U.S. State Department, on Monday claimed responsibility for the attacks, according to the Associated Press.

The attacks are the first time that al-Shabab has attacked sites outside Somalia, targeting nations that lend military support to Somalia&rsquo;s fragile government. And by targeting Uganda, Shabab also is targeting a key part of the United States&rsquo; strategy in Somalia.

&ldquo;This is the first time they (Shabab) have acted outside the Somali territories. They&rsquo;ve really gone abroad. It [will] indeed represent a game-shifter,&rdquo; said Sally Healy, a Somalia expert from Chatham House, a London think tank that researches and analyzes international affairs. &ldquo;This is absolutely a new dimension,&rdquo; Healy said Monday.

Ugandan troops, crucial to preventing an al-Shabab takeover of Somalia&rsquo;s government, receive predeployment training from U.S. Africa Command and European partners. By exporting terror and violence to Uganda, Shabab could cause leaders there to rethink their involvement in Somalia.

&ldquo;I think there is probably going to be a considerable reaction in Uganda,&rdquo; said Healy, who anticipated a public outcry, and a possible second-guessing about the Somalia mission in Ugandan media.

Whether that reaction causes leaders to cut and run from Somalia or act with greater resolve remains to be seen. But al-Shabab showing signs of exporting terror could prompt others in the region to band around Uganda and lend more support to containing the Somalia threat, Healy said.

The international community is counting on Uganda to remain committed in Somalia, but leaders in Kampala could face political heat at home for their engagements abroad, added Richard Downie, an Africa analyst at the Center for Strategic and International Studies.

&ldquo;It&rsquo;s bound to cause serious concerns and some reevaluation. There is an election coming up next year and ordinary Ugandans are going to be asking, &lsquo;why are we getting involved here?,&rdquo; Downie said. &ldquo;But I don&rsquo;t really see what the United States can do. There aren&rsquo;t any attractive options.&rdquo;

U.S. Secretary of State Hillary Clinton vowed support for Uganda, according to a statement. Clinton didn&rsquo;t call out al-Shabab by name but she said the U.S. would support the hunt for those involved in the attacks.

&ldquo;At this tragic moment, the United States stands with Uganda. We have a long-standing, close friendship with the people and government of Uganda and will work with them to bring the perpetrators of this crime to justice,&rdquo; Clinton said in the statement.

As of Monday, AFRICOM had not fielded any requests to lend support in response to the attacks in Uganda, a command spokeswoman said.

On the ground in Mogadishu, Somali government forces and insurgents are fighting for control of the capital.

Millions in U.S. taxpayer dollars are pumped into the bankrupt nation each year in an attempt to prop up a transitional federal government, which so far has proven incapable of securing Mogadishu from Islamic militant groups.

Ugandan Lt. Gen. Edward Katumba, during a visit with U.S. military officials in Washington this spring, said more engagement from the international community is needed in Somalia. Katumba told Stars and Stripes that more training from AFRICOM and others would help the Ugandan and Somali forces in the fight against al-Shabab.

&ldquo;If the world closes its eyes on Somalia, that is where the al-Qaida will find a foothold,&rdquo; Katumba said in May.

Earlier this year, a U.S. State Department official said there is no plan for a strategy overhaul in Somalia.

Indeed, it will probably take more than a few isolated terrorist attacks on foreign soil to change that approach. However, Shabab, for the first time, appears to have become expeditionary.

&ldquo;Profound change would happen if it were terrorist attacks close to us,&rdquo; Healy said. Otherwise, &ldquo;I would be astounded if the Americans ever sent troops to Somalia.&rdquo;