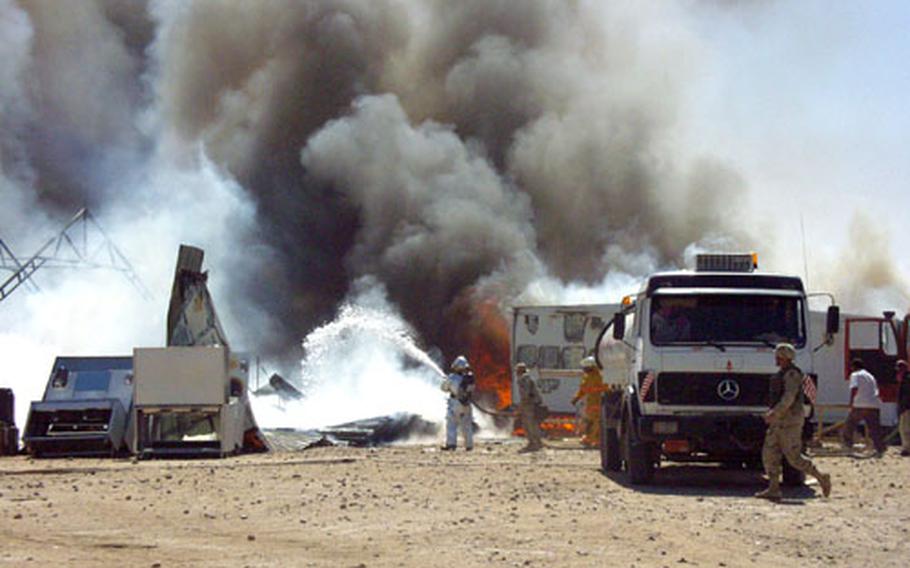 Everyone inside escaped uninjured.

The blaze began about 10:30 a.m. &#8212; just 10 minutes after the end of Protestant worship services at the military post, which is currently home to more than 8,000 U.S. soldiers. Two chaplains, a chaplain&#8217;s assistant and several worshippers were still inside, but they fled seconds before flames consumed the facility.

His assistant, Sgt. Nicholas Vara, and Staff Sgt. Robert Brady stayed behind for a short while to try to salvage a laptop computer, a sound system and other gear.

Capt. Buddy Hammil, a 1-3 Aviation chaplain, said he didn&#8217;t see any smoke or fire when he left the tent. But he quickly realized it was a serious fire.

About 60 workers &#8212; half civilians and half of them soldiers &#8212; were in the kitchens at the rear of the tent complex. They rushed out the back.

Chief Warrant Officer 2 Stephanie Adams, the officer-in-charge of the dining facility, said a few of the workers panicked and froze.

The morning was sunny and warm, and many soldiers had been given the day off to do laundry or relax. They were rousted from their tents as a precaution, and thousands of them watched the blaze.

Some soldiers said it worried them to see the blaze spread so fast. Thousands of them had been eating in the tents only a couple of hours earlier. And the tents soldiers live in are made of the same material as the dining tents.

The dining facility had been rapidly expanding since the first soldiers arrived at the camp in January. At the time of the fire, it was composed of five side-by-side tents.

Firefighters said the fire began in the northernmost tent, which had been erected Saturday. Workers were setting up chairs in the tent that morning, said Joseph Varghese, area manager for the Tamimi Group, the contractor that provides some of the workers for the dining facility.

Fourteen Camp Udairi firefighters &#8212; reservists from the 336th Engineer Detachment in Racine, Wis. &#8212; rushed to the scene. A stiff northwesterly breeze spread the fire too fast for them to extinguish but, with the help of some soldiers and heavy equipment, they were able to haul away diesel and propane tanks in the back near the kitchen.

Safety investigators have not determined what caused the fire, but firefighters said they are looking closely at the possibility it was a short in an electrical wire.

As soon as the smoke cleared, trucks began clearing away the rubble. For Sunday dinner, Adams supervised the handing out of Meals, Ready to Eat. But Adams said kitchen trailers were to be brought in Sunday night and will be serving chow Monday. She expected three temporary tents to be standing within two days, and a permanent dining facility over the rubble of the old one within two weeks.

After the embers had cooled, firefighters allowed Vara to venture back into ruins of the church tent. He found his laptop computer, partly melted but, amazingly, still working. His bag had been singed and CDs melted.

A table on the altar had been burned to a crisp. On top of it sat his Bible, untouched by the flames.