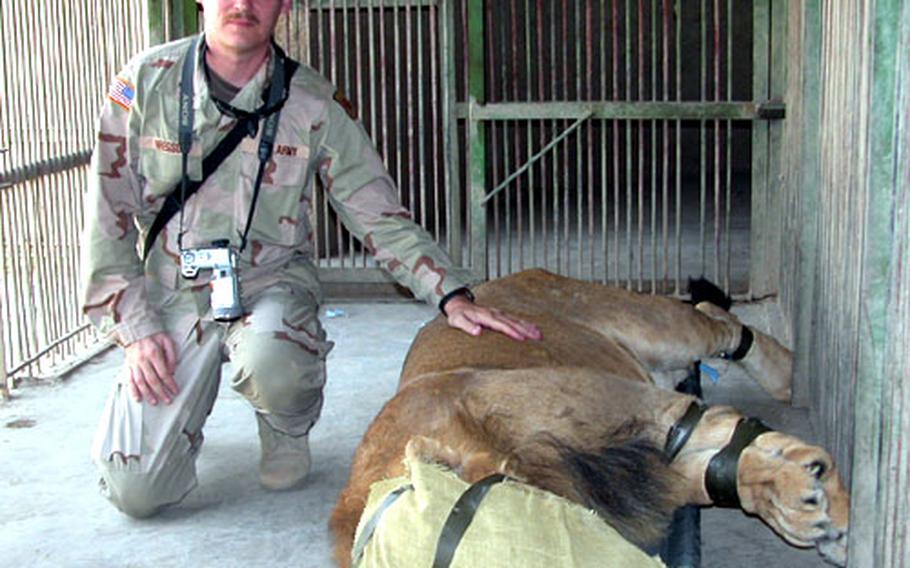 1st Lt. Gorden Gregson of Headquarters and Headquarters Company, 1st Battalion, 153rd Infantry Regiment, kneels next to a sedated Prince Brutus before the lion was taken to the zoo. (John Queen / Courtesy of U.S. Army)

1st Lt. Gorden Gregson of Headquarters and Headquarters Company, 1st Battalion, 153rd Infantry Regiment, kneels next to a sedated Prince Brutus before the lion was taken to the zoo. (John Queen / Courtesy of U.S. Army) Staff Sgt. Virgil Prince kneels next to lion Prince Brutus at Baghdad&#39;s Forward Operating Base Warrior. Brutus and eight other lions were recently moved to the Baghdad Zoo by the 425th Civil Affairs Battalion. (John Queen / Courtesy of U.S. Army) 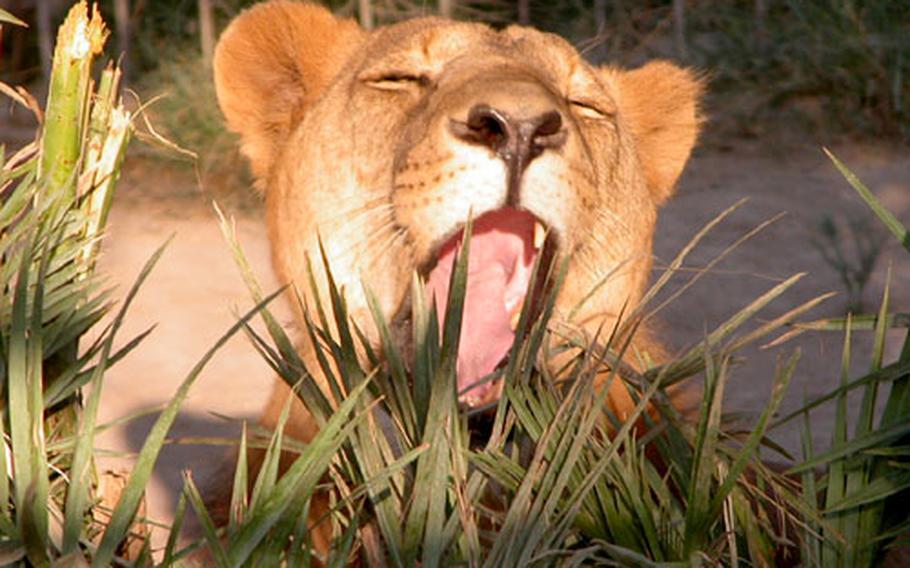 A lion yawns at Baghdad’s Forward Operating Base Warrior before being transported to the Baghdad Zoo. (John Queen / Courtesy of U.S. Army)

BAGHDAD &#8212; There&#8217;s no Army job classification for lion tamer, but some soldiers of the 425th Civil Affairs Battalion can add the job description to their resume after they recently helped move nine lions to the Baghdad Zoo.

Three of the lions, a male and two females, had belonged to Saddam Hussein&#8217;s son, Udai, and were captured by the 3rd Infantry Division during the fall of Baghdad. Shortly after that, six cubs were born, bringing the total number of lions under Army control to nine.

The cats had been kept in a 33-by-66 cage at Forward Operating Base Warrior, home to the Arkansas National Guard&#8217;s 1st Battalion, 153rd Infantry Regiment, in the International Zone, formerly called the Green Zone, of central Baghdad.

On the day of the move, pairs of cats were tranquilized by zoo veterinarians. Once asleep, they had their paws taped together, bags put over their heads and were then carried on Army litters into armored Humvees for the brief drive to the zoo.

&#8220;Zina and Heather, the two lionesses, were probably some kind of pet because they have been declawed,&#8221; he said.

At the zoo they were carried into their new home, a 165-by-165 pen paid for by the 1st Cavalry Division. Financial support also came from the American Zoo and Aquarium Association, Whittington-Jones told Army officials.

The lions&#8217; new enclosure has plenty of room, with trees, vegetation and low metal platforms for the nine cats to climb on and explore.

The move has drawn mixed feelings from soldiers at Forward Operating Base Warrior.