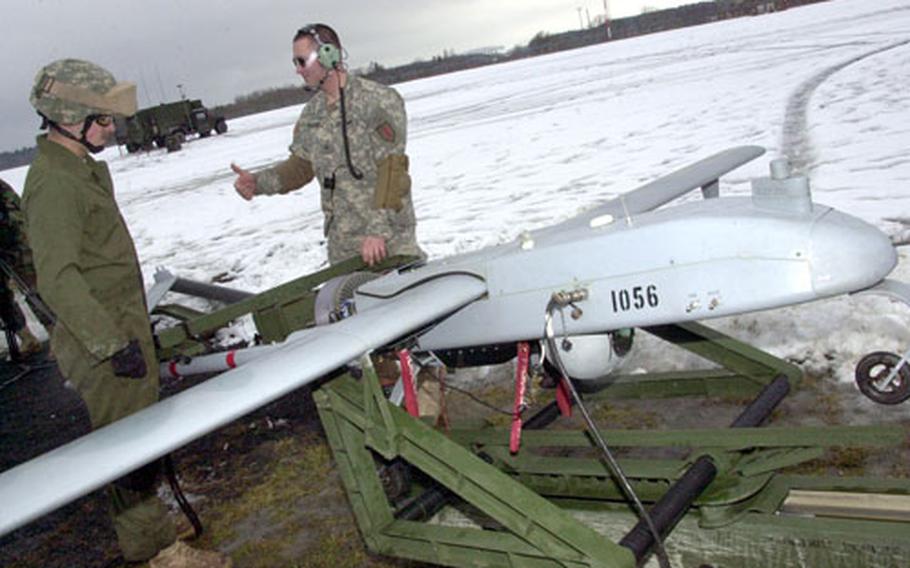 Company C, 101st Military Intelligence Battalion is at the Vilseck Forward Arming and Refueling Point (FARP) attempting to fly one of its four Shadow UAVs in support of the 1st Infantry Division&#8217;s 2nd Brigade Combat Team, which is training at Grafenw&#246;hr.

UAVs are remote-controlled aircraft equipped with cameras and sensors. They are used extensively in Iraq and Afghanistan to provide commanders with up-to-the-minute aerial images of the battlefield.

The 35-year-old Corona, Calif., native said the Company C Shadows were used in Iraq when the 1st Infantry Division deployed there from January 2004 to March 2005. The 101st will inactivate in June, but Company C will upgrade to the latest version of the Shadow in March and remain part of the 2nd Brigade Combat Team, which is expected to deploy to Iraq later this year, he said.

Company C is made up of the 101st&#8217;s most experienced personnel. The 25-man unit includes 15 pilots, each with an average of 600 downrange combat flying hours, Gaw said.

On Thursday, the Vilseck FARP resembled Kitty Hawk, N.C., where the Wright brothers made their first flight of a heavier-than-air aircraft in 1903. Company C soldiers and two civilian contractors were hard at work testing the UAVs and setting up a launch ramp and two ground control stations.

The UAV pilots will fly the aircraft from the ground stations, which are inside a pair of modified Humvees parked at the FARP, Gaw said.

Staff Sgt. Lucas Johnson, 25, of Mount Lake Terrace, Wash., one of two senior mission commanders with the unit, said the UAVs will take off from the launch ramp &#8212; a 45-foot beam that sits on a trailer towed behind a Humvee.

By the time the aircraft launches, it is pulling 8 G&#8217;s &#8212; a force eight times as strong as gravity. Jet fighter pilots typically experience 6 G&#8217;s and need pressure suits to stay conscious, he said.

Gaw said the first UAV flights will support 2nd Brigade units conducting live-fire exercises at Grafenw&#246;hr. The flights will give soldiers from the units confidence in the system&#8217;s ability, he said.

Typically a ground unit preparing for a mission has a satellite photograph of its objective, but the imagery might be 48 hours old and vehicles might have moved, Gaw said.

Soldiers from ground units involved in the training at Grafenw&#246;hr on Sunday will be able to use the UAVs to determine, for example, how many buildings or how many vehicles they might encounter on the range at that moment, he said.

The UAV unit can provide live video footage to a ground unit&#8217;s tactical operations center or send video clips to soldiers in their vehicles, Gaw said.