U.S. working on deal that may give troops more access to Bulgarian bases 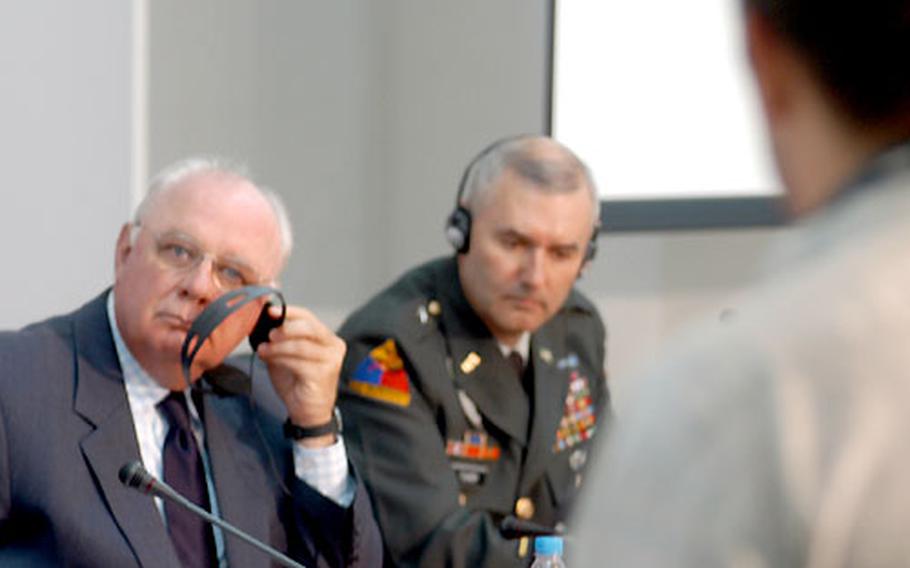 SOFIA, Bulgaria &#8212; The United States expects to finalize negotiations with Bulgaria in the fall that may grant U.S. troops additional access to military bases in the country, U.S. and Bulgarian officials announced Wednesday.

James Pardew, the U.S. ambassador to Bulgaria, said he expected to reach an agreement about use of the Novo Selo training area, about 25 miles from Sliven, and nearby Bezmer Air Base, as early as September, when Bulgaria&#8217;s new government is slated to take power.

Pardew did not discuss Sarafovo air base, near the coastal city of Burgas, but that base has been mentioned in past discussions of U.S. basing locations, Bulgarian defense ministry officials said.

Pardew and Ilko Dimitzov, deputy defense minister for Bulgaria, stressed in a news conference that the deal would not create a large, permanent presence of U.S. military forces.

As the U.S. military draws down forces in western Europe &#8212; primarily in Germany &#8212; it has said it would like to expand its presence in eastern Europe. Bases in Bulgaria, Romania and Poland have been mentioned for use as possible &#8220;lily pads&#8221; from which to launch or maintain contingency operations. The U.S. military regularly trains in those countries &#8212; with two Army exercises this month in Bulgaria and Romania.

In an interview with Stars and Stripes after the news conference, Dimitzov said no combat troops would be permanently stationed in Bulgaria, although some support elements could be. He said the size of the U.S. presence would be limited by the small size of the bases.

&#8220;They will become U.S. bases, but not in the sense of U.S. bases in Germany,&#8221; said Col. Yordan Yordanov, a Bulgarian Defense Ministry official who oversees cooperation with the U.S. military, in an interview with Stars and Stripes. &#8220;It will not be building cities, building PXs (post exchanges), commissaries, fitness centers and swimming pools.&#8221;

It is still unclear whether the Bulgarian bases would serve as forward operating bases that could be used for deployments or if they would simply be cooperative locations for training, Dimitzov said.

The proposal under review allows a U.S. presence until 2010, Dimitzov said.

How much the United States would pay to use the facilities.Whether the U.S. military would have unrestricted access to the bases.Discussions began in December 2003, when the Bulgarian parliament unanimously agreed to allow a U.S. military presence in the country, Dimitzov said.

Bulgaria has sought to improve relations with the United States in recent years as it works to climb out of economic hardship left over from communist rule. The country supported the United States in the war in Iraq and Afghanistan, committing 450 troops to Iraq and 60 soldiers to Afghanistan. It allowed U.S. planes to refuel at Sarafovo air base during both wars and offered use of its airspace during U.S. airstrikes in Kosovo in 1999.