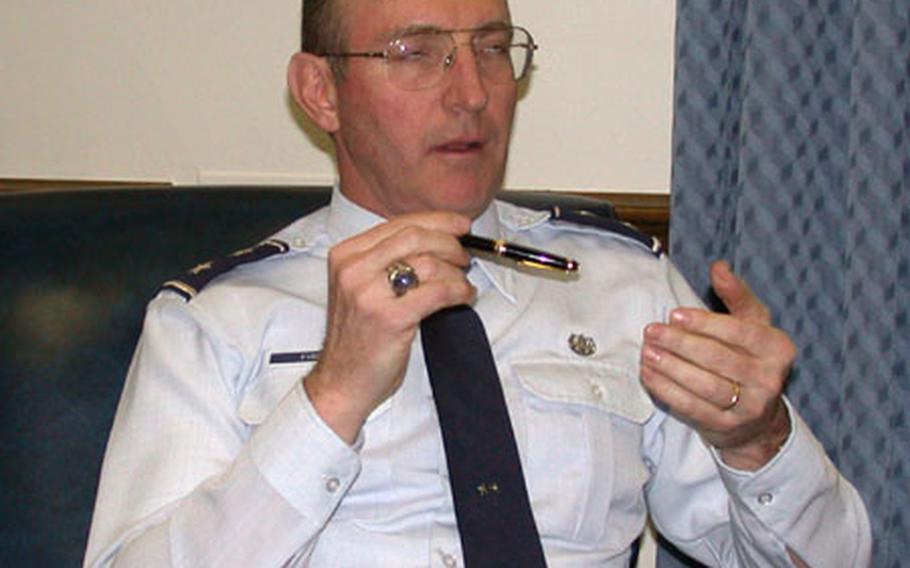 Maj. Gen. Thomas Fiscus, the Air Force&#39;s Judge Advocate General, talks about some of the legal issues involved in the U.S. war in Iraq. Military lawyers can advise commanders, Fiscus said, but in the end "it&#39;s always the commander&#39;s call" whether to attack a target. ()

ARLINGTON, Va. &#8212; The enemy may be fighting dirty in Iraq, but U.S. troops are going to stick to the internationally accepted laws of combat, and then some.

Maj. Gen. Thomas Fiscus, Judge Advocate General of the Air Force, said that no matter how far the Iraqi paramilitaries may go in disguising themselves as civilians, using children as shields, and hiding in mosques and hospitals, U.S. servicemembers will never change the rules of engagement (ROE), to match such dishonorable tactics.

&#8220;The way the United States fights is a little different from other people,&#8221; Fiscus said Friday in his Pentagon office. &#8220;We have this document called the Constitution, and it governs everything we do in the United States &#8212; including the way the military fights.&#8221;

By adding uniquely American concepts of human rights to the laws of armed conflict and Geneva Conventions adhered to by other civilized countries when they go to war, &#8220;we tend to restrict ourselves a lot more than the law requires,&#8221; Fiscus said.

But although engagement rules forbid U.S. troops from &#8220;fighting fire with fire&#8221; by adopting dubious guerrilla tactics, the ROE do not force American fighters to just sit there and take it when the enemy is pounding them, Fiscus said.

&#8220;It&#8217;s important for our soldiers, sailors, airmen and Marines to understand that under all laws of conflict, you always have the inherent right of self-defense,&#8221; he said. &#8220;If you have a reason to believe you or your unit are being attacked or in jeopardy, you have the right to defend yourself.&#8221;

Those calls can be very tricky, and each situation is different. That&#8217;s why the U.S. military spends so much time working to convey ROE to the troops, who, understandably, tend to be &#8220;concerned about whether they can get in trouble for doing their job,&#8221; Fiscus said.

JAGs are an essential element of any combat commander&#8217;s staff, from the senior-most offices in the Pentagon all the way down to division, brigade and even battalion headquarters.

In the Air Force, for example, JAGs sit side-by-side with commanders in the air operations center, examining every target set in advance to make sure it is legally valid.

Laymen may regard military lawyers as deadweights whose sole purpose is to tie their commander&#8217;s hands in the middle of a hard fight.

Most experienced commanders understand that their JAGs are a boon, not a burden, Fiscus said.

A JAG&#8217;s familiarity with the fine points of international law and the ROE means that the lawyer can come up with alternate courses of action that might not have occurred to the commander, he said.

&#8220;Unless we are convinced a commander is going to jail [if he sanctions a certain action], we are going to find a way to help him do what he wants to do,&#8221; Fiscus said.

And sometimes, the JAGs are there to tell a commander that he has latitude to attack a target he might have assumed was off-limits.

For example, Fiscus said, in 1995 when he was assigned as staff JAG to the commander of Joint Task Force &#8212; Southwest Asia in Riyadh, Saudi Arabia, &#8220;I was sometimes in a position of making a commander understand he had more right to attack than he thought,&#8221; he said.

Yet while &#8220;we think the law actually facilitates the conduct of the war,&#8221; in the end, lawyers never have the last say on the battlefield, Fiscus said.