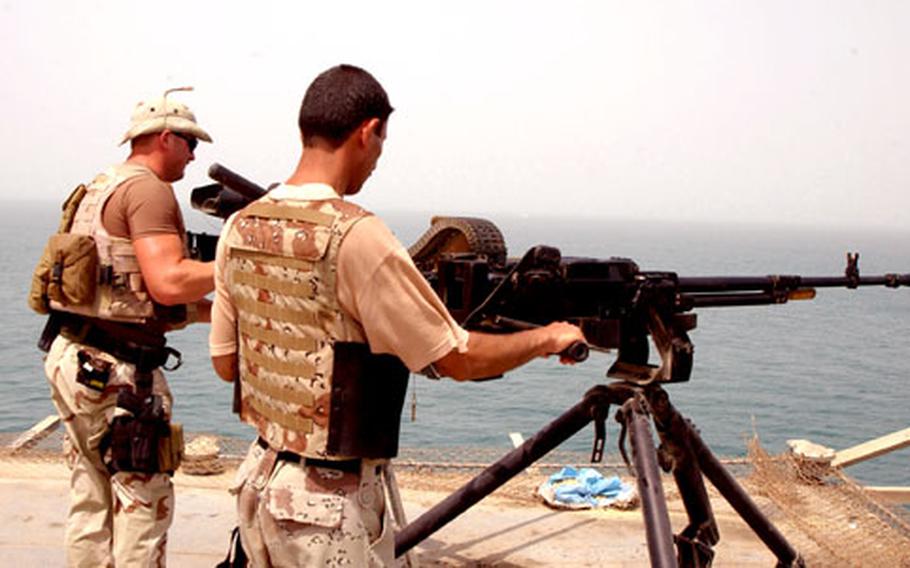 U.S. military officials say they plan to have an Iraqi navy up and running on its own by year&#8217;s end.

Sailors and Marines with the U.S. Navy&#8217;s 5th Fleet are training and equipping Iraqi forces so that eventually, an 800-sailor Iraqi navy can assume security duties for two oil platforms off the southern port city of Basra, officials said.

The Basra and Khawr al Amaya oil terminals provide about 90 percent of Iraq&#8217;s reserves, which translate to about $10 billion to $13 billion for Iraq, Navy officials said.

But because the terminals are important to the vitality of Iraq&#8217;s economy, they and the transiting supertankers that pull up to the terminals to take on fuel are targets of insurgents&#8217; attacks and armed pirates, officials said.

&#8220;That economic activity and the continued growth of economic activity is key to the way ahead for Iraqis determining their future and continuing the political process,&#8221; Vice Adm. David Nichols, 5th Fleet commander, said in a military statement.

&#8220;This was a good example of a ship having sound internal security measures that thwarted an attempt,&#8221; Brown said.

Modern-day pirates are known to work in the Persian Gulf area waters, where they attempt to stop and board ships to steal their cargos. U.S. and coalition forces provide round-the-clock protection and conduct security operations in the area, including waters surrounding the Iraqi oil terminals, to thwart pirates and deny enemy fighters use of waterways to transport people or weapons, Brown said.

It was a suicide attack in April 2004 that prompted U.S. forces to take over security of the platforms from Iraqi forces. The attack killed two U.S. sailors and a Coast Guardsman.

&#8220;We really reinforced our maritime security ops in the northern Gulf,&#8221; Nichols said in a June 7 teleconference with reporters. &#8220;Prior to that time, it had been Iraqi security on the platforms themselves, and coalition maritime force on the waterside.&#8221;

Since the deadly April attack, in which insurgents tried to approach the oil platforms in an explosives-filled fishing dhow, U.S. forces have been the primary providers of security.

&#8220;We are not just helping the Iraqis with the safekeeping of their oil terminals, we are teaching them how to soon take over the protection of their country&#8217;s major asset,&#8221; Lt. Cmdr. Chris Jacobsen, officer-in-charge of Mobile Security Detachment 25, said in a statement.