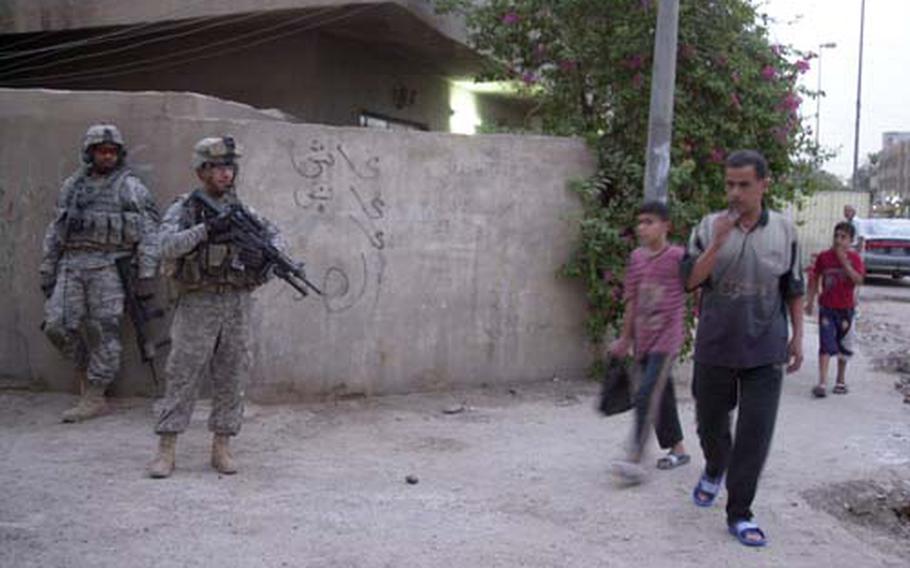 Two soldiers with Company C, 1st Battalion, 5th Cavalry Regiment look on as families walk through a neighborhood in Rusafa, part of eastern Baghdad. Company C is on a mission to find “rocket man,” the group of men who are shooting rockets into the Green Zone. (Teri Weaver / S&S)

They survey the streets of Rusafa, a relatively clean, quiet and well-to-do part of eastern Baghdad. They look for an open space about half the size of a soccer field.

They sneak in at night &#8212; maybe by car, maybe by donkey cart. The calculations for their target, the Green Zone on the other side of the Tigris River, are ready. They need a minute or so to place the launcher and start the 15-minute timer. Then, they run.

People are injured or killed, often Iraqi citizens. At 5:40 a.m. June 7, three Iraqis were injured after two rockets flew from Rusafa toward the Green Zone but missed their mark.

About a month ago, another hit inside the massive government and military complex in Baghdad. It killed one person, according to officers with the 1st Battalion, 5th Regiment with the 1st Cavalry Division.

It&#8217;s the job of the battalion&#8217;s Company C to go after the people launching the attacks. The soldiers, who are tankers by training, have dubbed the collective enemy "rocket man."

As overall violence decreases in Iraq, there are still places where attacks against U.S. and Iraqi forces are planned and executed with precision, says Lt. Col. Scott Jackson, the battalion commander. The Iraqis are just as concerned.

The operation is called Vigilant Guard. The Americans started it more than a month ago, and now they patrol with at least one Iraqi army unit in tow.

Their tactic is simple: Be in sector when most of the attacks happen, and talk to neighbors to see if they&#8217;ve seen any suspicious activity.

The job, however, is hard. While residents and shop owners are friendly, offering refreshments and cigarettes to the soldiers who come by, most are too frightened to report suspicious activity. Most say their neighborhood is safe.

The mission remains dangerous. On June 4, one of Company C&#8217;s platoons was hit with an EFP, or explosively formed penetrator, a sophisticated roadside bomb that can rip through armor. They were driving on a narrow neighborhood street, between large houses built for former Iraqi government officials under Saddam Hussein. The bomb hit the convoy&#8217;s lead truck and did minor damage, the soldiers said. No one was injured.

Their mission will continue after the June 30 deadline, by which U.S. forces will largely pull back from Iraqi cities. But U.S. troops will go out only if they have equal numbers of Iraqi soldiers and vehicles in the patrol. They hope that soon the Iraqis will begin leading the mission, according to Jackson.

On one block, four Iraqi men sit in a driveway, unafraid of insurgents or others who might see them.

It&#8217;s after 9 p.m., and from their stoop the men talk with a couple of Iraqi soldiers. They face an open field, lit up with a warped circle of fluorescent lights powered by a generator.

About three weeks ago, a rocket was launched from that field at about the same time of night, said Sgt. John Martinez, a member of 1st Platoon. By the time the platoon got there, the Iraqi army had cornered two men. They had also found the launcher and the timer.

But nothing linked the two suspects to the violence. In the end, they were let go.

Now, the men in the neighborhood keep watch alongside the Iraqi soldiers.

One of Company C&#8217;s platoon leaders, 1st Lt. Bart Heffron, 24, of Hilo, Hawaii, stops to talk with them. The men know some English and begin talking about their favorite whiskey. They ask Heffron inside for a drink, and he politely, regretfully declines.

The men say they are trying to get more neighbors to turn on lights to further illuminate the field.