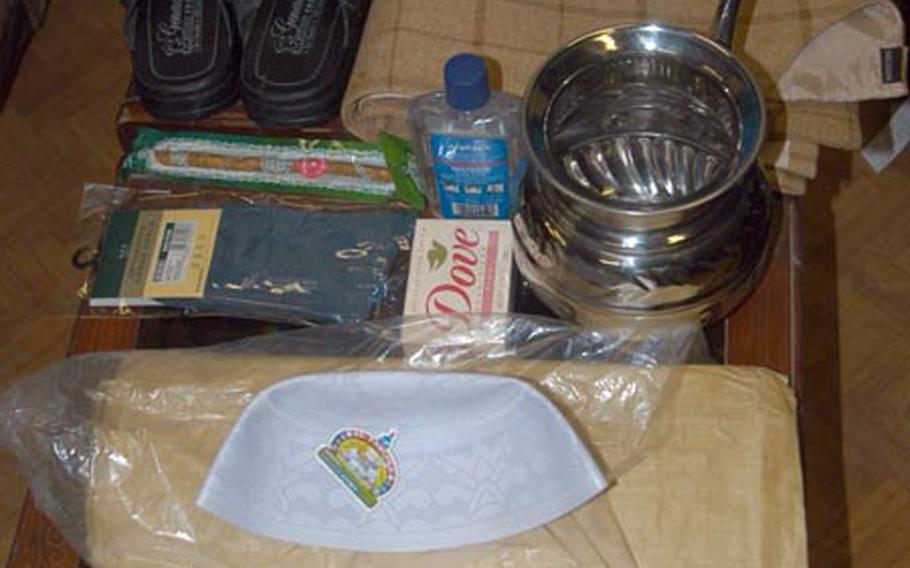 This picture illustrates some of the items — clothing, a prayer rug, a water jug and more — that make up the “mullah kit” that soldiers from the 1st Battalion, 503rd Infantry Regiment have given to the Islamic leaders of communities in Paktika province. (Kent Harris / S&S)

ORGUN-E, Afghanistan &#8212; A name such as Operation Embrace Islam might suggest that soldiers from the 1st Battalion, 503rd Infantry Regiment are changing their faiths.

But the battalion&#8217;s top noncommissioned officer said it&#8217;s more a matter of respecting the locals&#8217; faith. And Command Sgt. Maj. Richard Weik said the battalion has done that through its attitude and financial assistance.

Americans have a hard time grasping the role that religion plays in Afghanistan, he said.

So the battalion decided to take a program started by its predecessors in the province &#8212; the 10th Mountain Division&#8217;s 2nd Battalion, 87th Infantry Regiment &#8212; and expand it. Weik directed his senior NCOs to participate and in turn tell their subordinates to do so.

He said it&#8217;s understandable that soldiers under constant attack might think the entire local population is against them and, in turn, act hostilely toward them. But that&#8217;s not going to win any support for the United States or the Afghan government.

"When my paratroopers see their NCOs respecting Islam and the people, they emulate it," Weik said.

Some of that respect translated into refurbished mosques around Paktika province. Weik estimates about 300 mosques have benefited directly through the program, getting fixes such as new paint, solar-powered loudspeakers to announce prayer times, copies of the Quran and new carpeting.

The battalion is not only targeting mosques, but also local religious leaders. They&#8217;ve handed out items such as prayer rugs, turbans, shoes, teakettles and water jugs to local mullahs.

"We buy the best stuff we can," said Sgt. 1st Class Sonny Quintanilla, adding that such a donation might cost between $150 to $200. The mosque refurbishing kits are more expensive, sometimes costing several thousand dollars.

Weik said the program is helping to counter continual messages the Taliban and other insurgents repeat to villagers often cut off from the rest of the world.

"They say we&#8217;re here to take their country, abuse their women and disrespect Islam," he said.

Once the villagers see that&#8217;s not true, he said, "all [the Taliban] have left is intimidation."

And that&#8217;s a tactic the U.S. doesn&#8217;t use when it comes to religion, he said. He recalled an incident when a convoy of U.S. troops stopped near two villages during prayer time. Their two Afghan interpreters, clad in U.S. military uniforms, joined in the prayers to the amazement of the locals.

There&#8217;s more than enough mosques that need support for following units to take up the effort if they desire. The battalion estimates there are about 35,000 villages spread out over its area of operations.

"And just about every one of them have something they use as a mosque," Weik said.