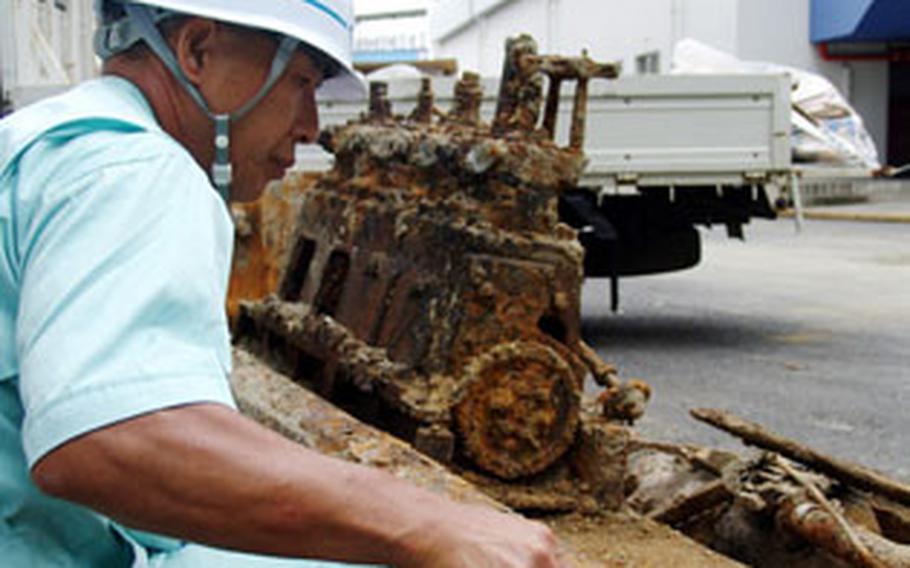 YOKOSUKA NAVAL BASE, Japan &#8212; Bury it, dump it in the water or burn it: The Japanese Imperial Navy cleaned house before the Americans occupied Yokosuka Naval Base in 1945.

A recent U.S. Fleet and Industrial Supply Center trench-digging project unearthed an 8-foot water tank and an engine once thought to be Japan&#8217;s first diesel motor.

The sleepy fishing village of Yokosuka, due to its resemblance to the French port of Toulon, activated Japan&#8217;s industrial age. Finance magistrate Tadamasa Oguri wanted Japan to build a Navy and contracted France&#8217;s Francois Leons Verny to help him.

Thus began Japan&#8217;s first industrial project, the Yokosuka Arsenal. It became Yokosuka Shipyard in 1903 and now is the site of Yokosuka Naval Base.

No one will know the engine&#8217;s true age or purpose until the rust and dirt are removed, she said.

It&#8217;s now in storage at Yokosuka Museum. Other industrial relics from the base, such as steam hammers and a gantry crane, are in the museum bearing Verny&#8217;s name by the JR Yokosuka train station.

All items are surveyed according to guidelines established in the base&#8217;s Cultural Resource Management Plan, which is updated every five years, Araki said.

These days, more people are getting interested in Japan&#8217;s industry, Araki said. Yokosuka is looking at building an all-industrial museum and Japan&#8217;s second oldest dry dock, in Yokohama (Yokosuka&#8217;s was first), now is experiencing newfound popularity as a beer garden, she said.