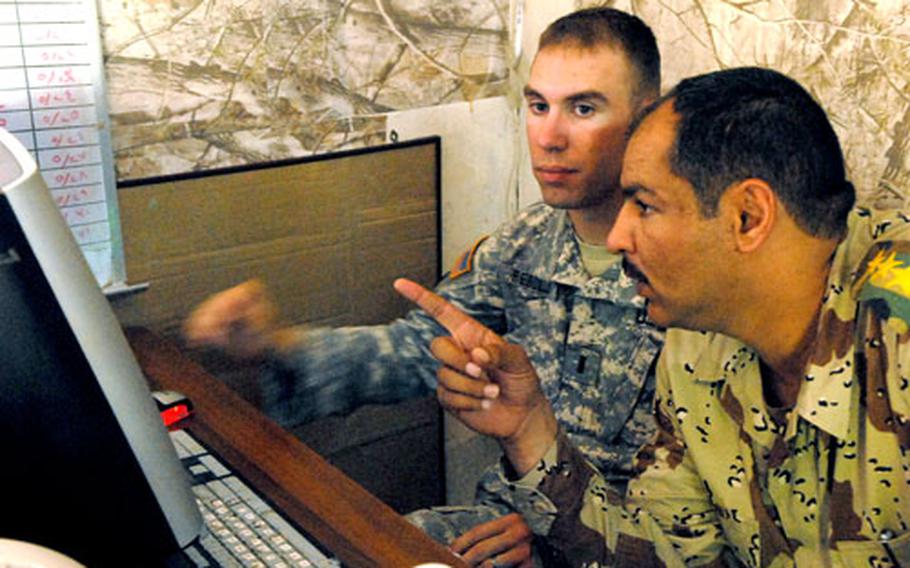 Rebolj, the Blue Platoon leader for Company M, 3rd Squadron, 3rd Armored Cavalry Regiment, met with Iraqi commanders and intelligence officers over tea at a couple bases several miles outside Tal Afar, where he shared some photos found in a weapons&#8217; cache and asked the Iraqis if they could identify any of the men in them.

The Americans and the Iraqis then spent some time speculating where a home in one of the photos might be located. One of the American soldiers grabbed some bug spray from his Humvee to help an Iraqi commander with an ant problem in his office.

All in all, it was a productive but low-key day. Then again, the area around Tal Afar has been a pretty low-key place for a while now.

While neighboring Mosul began to settle down only in recent months, Tal Afar, about 30 miles west, has been quieter much longer, although even that relatively peaceful period has been rocked by suicide bombers, revenge killings and sectarian violence.

Tal Afar&#8217;s turnaround began with Operation Restoring Rights in September 2005, when American troops launched an effort to kick insurgent fighters out of the area. While 3rd ACR troops began fighting insurgents as soon as they moved into Mosul late last year, the regiment&#8217;s Tal Afar soldiers found their area much quieter when they arrived.

Restoring Rights has echoes of Operation Lion&#8217;s Roar, a series of connected missions launched in Mosul by Iraq security forces in May. Attacks there have since plummeted.

Tal Afar is seeing right now what Mosul could see some time down the road, and Mosul is seeing right now what Tal Afar saw two years ago," said Capt. Daniel Bolton, commander of Company M, which covers Tal Afar and the surrounding area. Some analysts have speculated that the much-touted Operation Lion&#8217;s Roar in Mosul has only forced insurgent leaders outside the city. The Tal Afar area is also a transit area for fighters moving on to Mosul, and Rebolj said some insurgents live around Tal Afar but operate in Mosul.

But he added that he hasn&#8217;t seen any increased activity in his area since that operation began,&#8211; in part because Iraqi security forces haven&#8217;t been sitting still while the Mosul operation was taking place.

"The ISF [Iraqi security forces] guys here have been conducting major operations just like the guys in Mosul,"" Rebolj said. "They&#8217;ve been rolling guys up left and right."

A dry erase board in the tactical operation center that lists recent "significant acts" such as firefights or roadside bomb attacks &#8211;is often two-thirds empty now. Officers in the area say spectacular car bomb and suicide bombers still occasionally &#8212;&#8211; in Rebolj&#8217;s words &#8211;&#8212; "ruin it for everyone, but those attacks are the exception rather than the rule. Said Bolton: "Anything can kick up at any time.""

Rebolj, a former police officer and deputy, compares terrorism in Iraq to organized crime back in the States: "I don&#8217;t think you&#8217;re ever going to stop organized crime (completely). But you sure as hell can disrupt it, and that&#8217;s what we do out here.""

A lot of the work is done by the Iraqis, though. All-seeing Iraqi combat outposts guard the rural areas from atop lofty ridgelines. Many smaller outposts, all within sight of one another, sit along an oil pipeline to prevent insurgent attacks there. And Tal Afar proper is secured mostly by the Iraqis.

Pretty much anywhere you stand in Tal Afar, you can see a checkpoint," Rebolj said. The American presence around Tal Afar has dwindled as the area has become more peaceful and Iraqi security forces have grown. Two years ago, a "good chunk" of the 3rd Armored Cavalry Regiment was stationed in the area, Bolton said. There is now just his tank company there, plus various transition teams.

American expertise is still needed. A police transition team video from a recent car bomb showed Iraqi Police who needed considerable American prodding to set up a cordon. The team members had to tell them repeatedly to spread out and clear the civilians from the area.