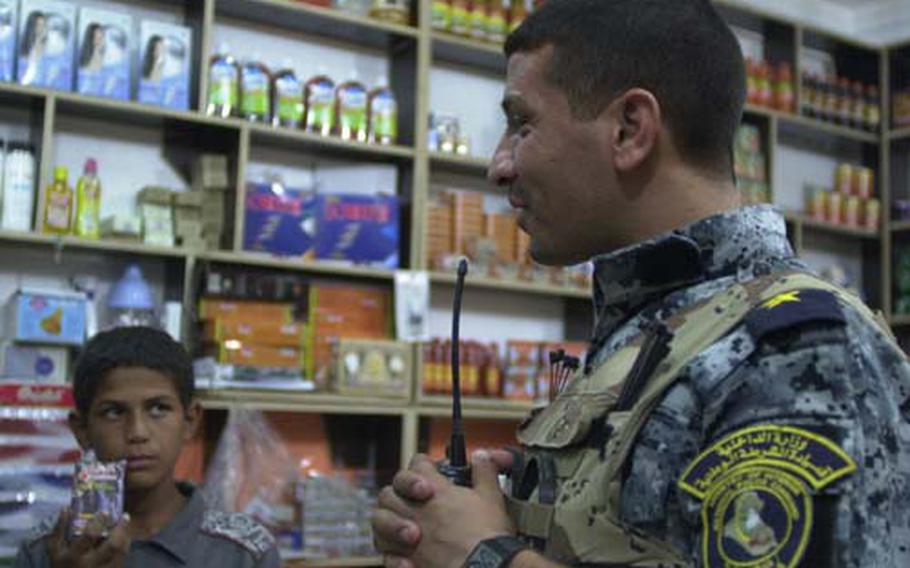 Americans are pushing the Iraqis such as this lieutenant with the National Police to take the lead in planning patrols and talking with residents about security problems. He recently got a tip about a home used for storing weapons but decided to gather more information before acting on it. (Teri Weaver / S&S)

Americans are pushing the Iraqis such as this lieutenant with the National Police to take the lead in planning patrols and talking with residents about security problems. He recently got a tip about a home used for storing weapons but decided to gather more information before acting on it. (Teri Weaver / S&S) 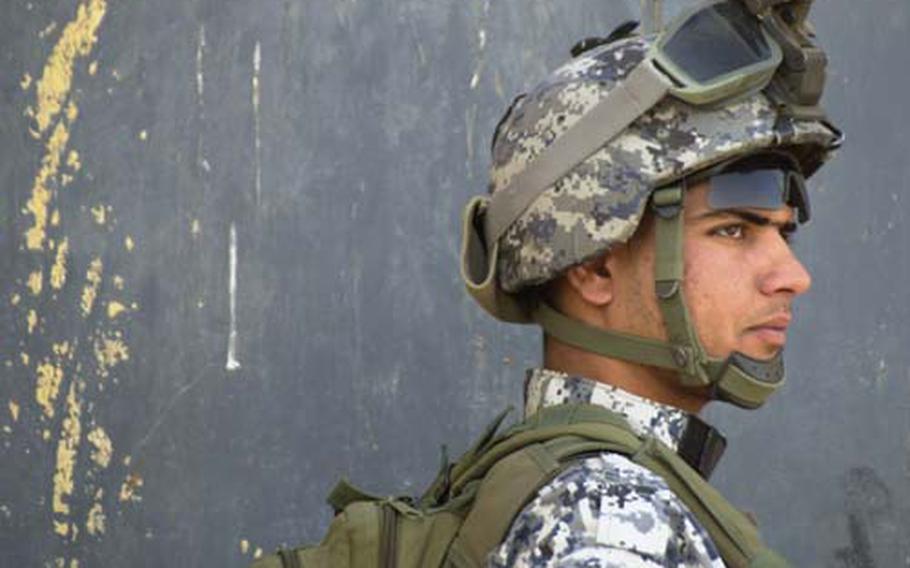 A National Police officer conducts an early-morning patrol in Hussainiyah. On Tuesday, the American troops that stay in the cities stay at the express invitation of the Iraqi military, U.S. commanders say. They will take the lead in mentoring and teaching Iraqis and take a back seat on patrolling and missions. (Teri Weaver / S&S) 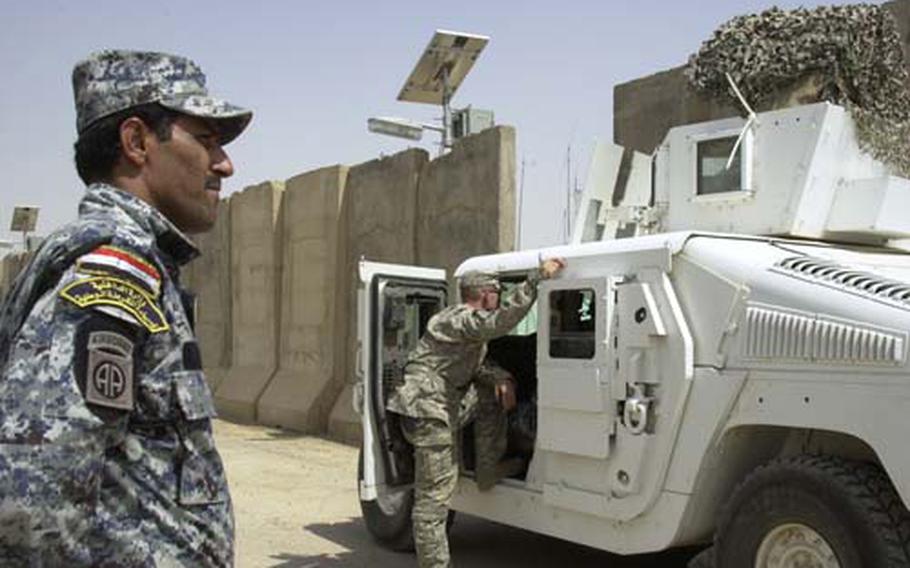 U.S. troops have pushed to train Iraqi security forces on more military skills. This National Police unit in Istaqlil was trained in June on how to use their new Humvees as a weapon rather than just a truck to transport soldiers. (Teri Weaver / S&S)

After Tuesday, there will be U.S. soldiers inside Iraq&#8217;s cities, even though that&#8217;s the deadline for combat troops to withdraw from them.

They will protect the bases, helicopter landing pads and military hospitals that continue to serve thousands of U.S. servicemembers. They&#8217;ll train Iraqi security forces, a mission that has been under way almost as long as the war itself. They&#8217;ll oversee projects to build roads, pick up trash and resurrect utilities left demolished or neglected since March 2003.

As of Tuesday, all U.S. combat troops are to leave Iraq&#8217;s cities, according to the long-term security agreement struck last year between the two countries. In the past few weeks, that simple directive has caused a flurry of questions, changes and moves.

U.S. Army company commanders and platoon sergeants have begun sharing with their Iraqi counterparts well-guarded details about suspects and attacks. They&#8217;ve insisted that the Iraqis take charge in planning and manpower for all joint patrols inside cities.

Some line sergeants and officers began giving lower-ranking Iraqi troops detailed information from U.S. military maps and about U.S. troop movement, a decision that still worries many in the field.

Some U.S. troops have pulled back from the cities. That withdrawal mainly involves moving out of the U.S. side of the joint security stations that were part of the push two years ago to get more American troops into population centers to quell violence.

"I think we have reason to believe, and I think our forces have been alerted to the possibility, that we will likely see an uptick in violence leading up to the June 30th deadline," Morrell said. "That said, I think Gen. [Raymond] Odierno is confident both in the capabilities of his forces to deal with that increased threat level, and with the Iraqi security forces."

The Associated Press reported Sunday that the top U.S. commander in Iraq says he believes Iraqi forces are ready to take over when American combat troops pull out of Baghdad and other cities by Tuesday.

Odierno says he thinks it&#8217;s the right time for the U.S. withdrawal and for Iraqis to take responsibility for security.

Odierno says U.S. troops still will be training and advising Iraqi forces and Americans will be conducting operations outside Iraqi cities after the deadline.

Come Tuesday, the American troops that stay in the cities will be there at the express invitation of the Iraqi military, U.S. commanders say. Those servicemembers will take the lead role in mentoring and teaching Iraqis. They will take a backseat on patrolling and missions.

For the transition to work, American commanders say, it&#8217;s time for the Americans to follow the Iraqis. U.S. troops on the ground will have to let the Iraqi forces do things their way.

Iraqis build relationships &#8212; and military strategies &#8212; over tea and talk, not over maps and mission briefings. They often start a patrol when they want, not when the schedule dictates. The U.S. soldiers have adopted a name for it: "Inshallah time."

When God wills it, the work will begin.

One platoon sergeant, working with an Iraqi National Police company just north of Baghdad, figured his way around this.

Sgt. 1st Class Andrew O&#8217;Dell, who works in 2nd Platoon under Enger&#8217;s Troop A, simply put the tea time into his patrol schedule. Now a two-hour mission is a three-hour mission, and both O&#8217;Dell and the Iraqi lieutenant he works with are well-caffeinated and on time.

The security agreement calls for equal numbers of Iraqis and Americans on combat patrols, the bulk of the troops still trying to quash and catch the killers. U.S. troops worry that some Iraqi units don&#8217;t have the manpower or vehicles to meet the requirement.

They worry some Iraqi units won&#8217;t have the desire to patrol, especially for long spells in the summer heat.

The Americans are working to accept this. They are also trying to build incentives.

U.S. commanders are pushing training classes on Iraqi units, then asking Iraqi commanders to deploy the troops in the field to test the knowledge. American commanders remind Iraqi leaders to think about the extra equipment &#8212; such as helicopters and unmanned aerial vehicles &#8212; that the Americans can provide to supplement the Iraqi missions.

More than 150,000 Iraqi security forces and &#8220;Sons of Iraq&#8221; remain in Baghdad, according to Maj. Gen. Daniel Bolger, the U.S. commander for all American troops in and around Baghdad.

At one time, there were 76 joint security stations in and around Baghdad, small shared bases in the city established as part of the 2007 surge. By Tuesday, the Americans will remain in about 10 stations, Bolger said.

Only 1 to 2 percent of troops in the capital would be Americans, he said last Saturday as the Americans left a small base at the edge of Sadr City. That ratio will fluctuate each day according to missions, he added.

Bolger said U.S. and Iraqi leaders will assess the situation each month, with more U.S. withdrawals likely in the months ahead. He also said that the Iraqis can ask the Americans to move back into the cities if needed.

Some large bases like Camp Victory &#8212; while technically within Baghdad city limits &#8212; will be considered as outside the city for purposes of the June 30 agreement, officials have said.

Still, most expect the number of combat patrols to decrease, at least in the days following the transition.

A slower pace is a difficult reality for some U.S. soldiers, especially those who are serving their second, third or fourth deployment. They are accustomed to working, and sometimes fighting, day and night.

Sgt. 1st Class Anthony Rives, a platoon sergeant with the 1st Battalion, 5th Cavalry Regiment, is working with Iraqi soldiers in eastern Baghdad. He understands the security agreement and the changing times. He&#8217;s also worried that following the Iraqis&#8217; lead will put his men at risk.

But the job of the U.S. soldier here is changing, Rives and others say. That leaves U.S. commanders planning for what&#8217;s next.

Staff Sgt. Jaime Ibarra, with the same regiment, knows the training is coming and admits it&#8217;s useful. Since arriving in Iraq four months ago, he&#8217;s fired his weapon once, as a warning shot.

He also knows, however, that many soldiers are hoping for something else after Tuesday.