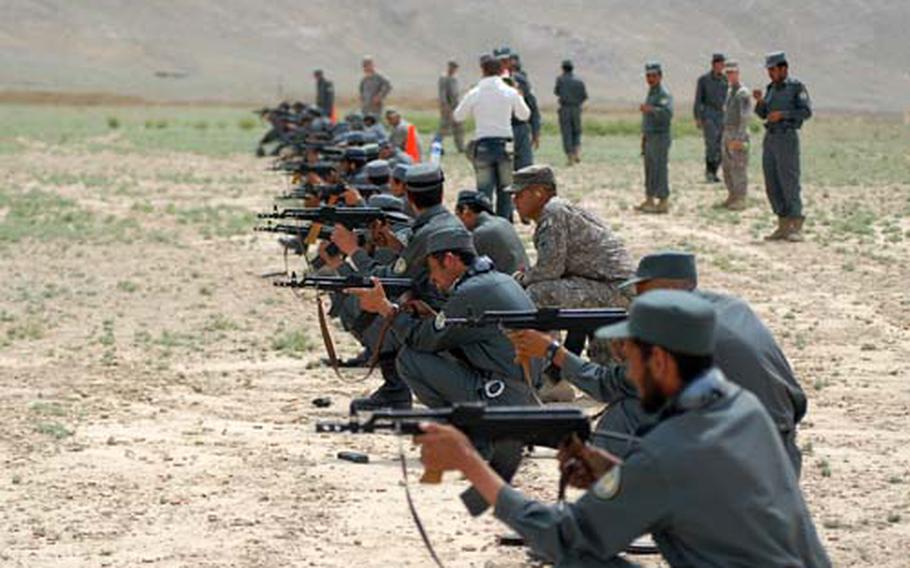 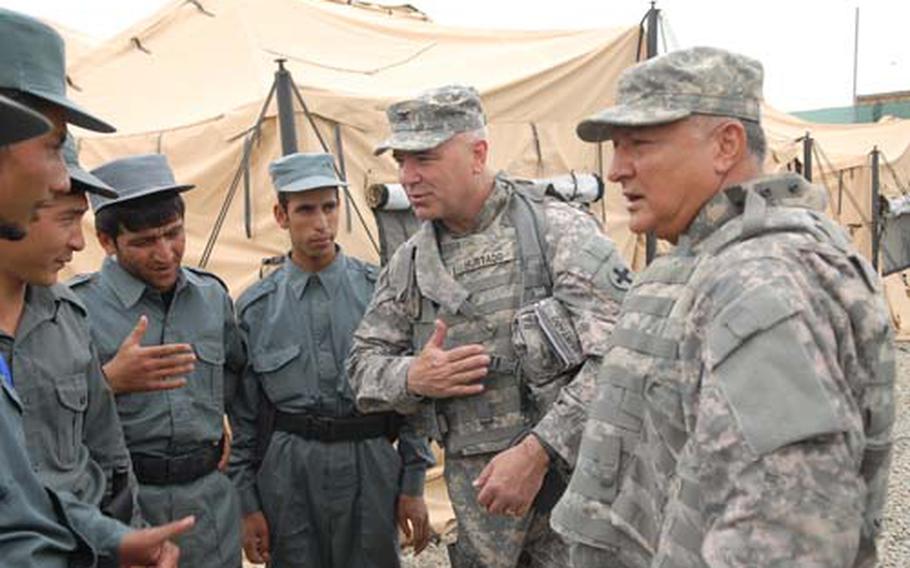 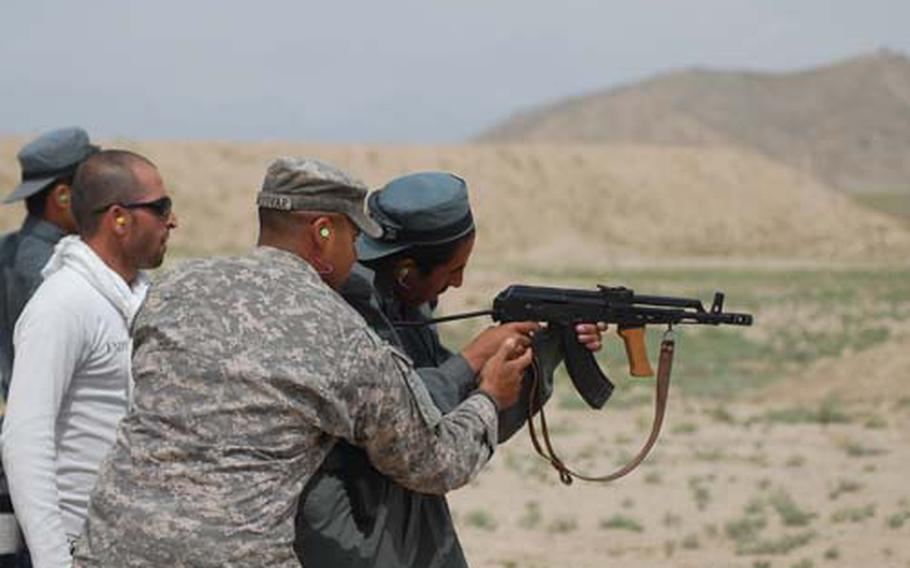 KABUL - From his vantage point behind the firing line, Staff Sgt. Joshua Winchester watched the awkward men in their fresh, new uniforms let loose a fusillade of bullets from their AK-47s that, more times than not, missed the targets at the far end of the range.

It was an unsteady display coming at a critical time. The Kabul police force is hiring thousands of new recruits ahead of presidential elections in late August, and American mentors are working urgently with Afghan National Police colonels to quickly train them.

For Winchester and the other trainers, the slow start for the first 640 recruits was typical. Even while rushing to get recruits on the ground quickly, they know that mentoring unskilled police officers requires patience.

A few days are about all they have. Fearing a deteriorating security situation, Combined Joint Task Force Phoenix, as the mentoring unit is called, is helping recruit and train police officers across the country to secure polling stations and prevent violence that could derail the vote.

In greater Kabul&#8217;s 30 districts, police plan to shore up their ranks by 4,800, nearly doubling current numbers. To do this, the mentoring team, working with civilian law enforcement experts, created an intensive three-week course rather than standard eight-week training program.

It&#8217;s a gamble, putting these inexperienced and often uneducated men out into the field so quickly &#8212; one that the U.S. tried before in Iraq. There, when fighting was at its most intense several years ago, Iraqi police officers received cursory training and were quickly dispatched onto the streets. Only now is the Iraqi Interior Ministry, along with Combined Security Transition Command &#8212; Iraq, circling back to provide those police officers with more formal recruit training.

But in Afghanistan, with the elections scheduled for Aug. 20, and the numbers of police that require training so high, time is critical. The objective is to get as many forces out at the polls as possible, and once a new government is installed, these Afghan officers can return and receive their proper eight-week training.

Still, the commanders of Task Force Phoenix and its leadership at Combined Security Transition Command &#8212; Afghanistan often talk of building long-term sustainability in Afghanistan&#8217;s security forces, rather than the kind of quick fix this accelerated program puts in place.

But ahead of the elections, the solution was the best available, said Lt. Col. Anthony Offut of the Joint Force Headquarters Oregon National Guard.

In the meantime, the Afghans are filling in critical numbers on the ground, said Col. Percy Hurtado of the Oklahoma National Guard. He commands the mentoring team for Kabul.

"I think they are going to play a critical role in election security because of the number of polling stations they are going to have to secure," Hurtado said. "There&#8217;s no comparison to the last elections. I guess the environment wasn&#8217;t as bad as it is today in terms of suicide attacks, vehicle explosive devices and rocket attacks. That&#8217;s why there&#8217;s such a requirement to put these policemen in."

Adding 4,800 officers would be "a challenge for any police structure," he said. But the new recruits will be partnered with veteran officers, and bolstered by forces from the Afghan National Army, which enjoys a more professional reputation.

"Being there with uniforms on is probably one of the best deterrents," said Col. Gordon Moore of the Virgin Islands National Guard and a commander of mentors in one of Kabul&#8217;s police regions. "If you flood the city with police, the bad guys are less free to move around."

At Fire Station 3 in Kabul this week, mentors simulated a suspicious vehicle stop. Recruits spread out and pointed their rifles at the pickup, while others pulled the driver and passengers from the truck. Inside, they found a bomb, and everyone backed up.

It was a simple drill, but drove home how close to the front lines these city-based police officers often find themselves.

"It works. You can see it," said 1st Lt. Bryan Addington of the 33rd Infantry Brigade Combat Team out of Illinois.

Part of the rush up to the elections stems from the fact that the mentoring teams, which also include servicemembers from other branches and countries, have themselves been short-staffed. As a result, Task Force Phoenix focused in recent years on mentoring the Afghan National Army, which already had a basic structure in place and was directly battling the Taliban and other insurgents.

Efforts to build up Afghanistan&#8217;s less developed national police were placed on a back burner and are only now coming to fruition. So, in addition to needing more police on the streets, more mentors were needed to help give them the tools they require to be effective.

That is also changing. Recently, plans were announced to double the size of Task Force Phoenix by sending a brigade of 4,000 soldiers from the 82nd Airborne to bolster the mentoring team.

It will allow the guardsmen to consolidate their mentoring efforts in the north and east, while the active duty soldiers of the 82nd will mentor police and army in the country&#8217;s south and west.

Addington was so encouraged by these new numbers that the guardsman out of Carbondale, Ill., will not leave with the 33rd Brigade. Instead, he extended for another year to see the results when the mentoring team is fully staffed.