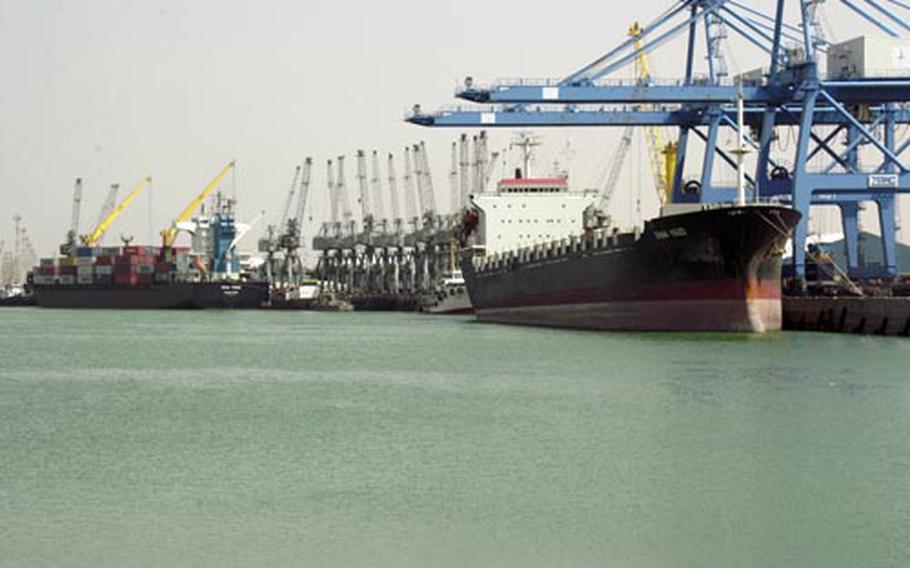 Umm Qasr handles grain, cement, steel, durable goods, cars — “anything you can think of that you would go down to the store to buy,” an Army officer said. (Teri Weaver / S&S)

UMM QASR, Iraq &#8212;Twice a week, a ferry from Dubai pulls into Umm Qasr&#8217;s northern port with about 50 passengers who step onto Iraqi soil after a two-day journey at sea.

Outside the passenger terminal, scores of South Korean Kias and Hyundais wrapped in protective paper sit in lots.

A stacked rainbow of cargo containers lines the edges of Umm Qasr&#8217;s three ports. Drivers of tractor-trailers wait nearby, slowly parading through the holding areas to hook up their freight and take it north toward Baghdad and the rest of the country.

Umm Qasr is Iraq&#8217;s busiest commercial port. Located inland near Basra on a strait that rises from the Persian Gulf, the port brings in 85 percent of the country&#8217;s grain supply and 80 percent to 90 percent of all its commercial goods, according to U.S. military records. Oil leaves the country at two offshore ports on another waterway, further east and closer to the gulf.

Into Umm Qasr comes "anything you can think of that you would go down to the store to buy," said Army Maj. Sean Tyson, who works with Iraqi border officials in Basra.

In also comes anything that a person could think to smuggle, Army officers acknowledge, and no one has any idea how much illegal trade in weapons, drugs and people are coming through the ports or other border areas in southern Iraq.

Only recently have coalition forces taken a closer look at the port and its security, according to U.S. Army officers tasked to train Iraqi officials who run the land and sea ports in the south part of the country.

"It&#8217;s about balancing security and economic development," said Col. Warren Perry, who oversees nine U.S. Army teams whose mission is to train Iraqi border officials at sea and land ports in Basra province. "We can&#8217;t shut the port down. If we make it so hard, no one can make money. But if it&#8217;s not safe, who&#8217;s going to use it?"

In the early and middle years of the war, the British forces stationed in Basra tried to contain violence while training Iraqi security forces. It&#8217;s only been in the past year or so &#8212; since the Iraqi army drove violent militias from the ports and Basra &#8212; that the effort turned toward the ports.

A team of U.S. troops has taken over and doubled the manpower around the port. Troop C, 1st Squadron, 10th Cavalry moved into Patrol Base Quebec about a month ago. It sits less than half a mile from the water and next to an Iraqi marine base intended to secure the docks.

Nineteen Iraqi agencies claim some part in securing and running Umm Qasr with no clear leader in charge, Benson said.

The port also operates under an Iraqi customs law passed in the mid-1990s, still the only existing written document that deals with goods at the borders. That leaves myriad agencies trying to follow a law that gives authority to agencies and departments that no longer exist, Benson and others said.

Umm Qasr is losing money on customs taxes, shipping fees and a whole industry that would rather dock their ships in Kuwait or Jordan than deal with a port that doesn&#8217;t have International Ship and Port Security certification, U.S. military officers say.

That stamp of approval assures shippers the port meets certain safety standards, from dredging depths to cargo inspections. A remaining British officer, a U.S. Navy officer and a State Department official are working with Iraqis on the certification process.

The list of needs is long and diverse. In addition to worries about security and a jumble of administration, Umm Qasr lacks a working fire department, Benson said.

Some progress is being made. More than 30 underwater wrecks between the port and the gulf are gone. Sophisticated scanning devices are in place and are operational, as long as the electricity is on. This month, Japan began loaning Iraq 300 million British pounds, about $477 million, to continue the improvements.

Earlier this month, a group of one- and two-star U.S. generals visited Umm Qasr and went down to the water&#8217;s edge for a look without wearing body armor or Kevlar helmets.

But at the docks, some of the Iraqi border enforcement officials have no uniforms, making it harder for them to assert authority when questioning travelers and shippers who come ashore.

"A lot more crosses the border than you would imagine," Perry said of the growing legal trade in the country. "A lot of it comes from Iran. And not all is bad."