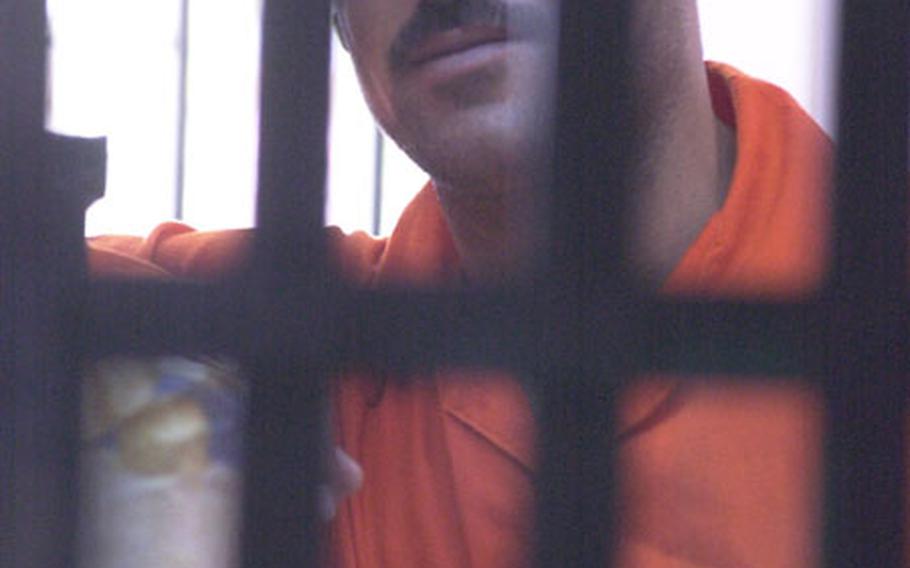 This Iraqi man was arrested at a mosque by soldiers from the 1st Cavalry Division&#39;s 91st Engineer Battalion after an informant tipped 1st Cav officals that he and four others allegedly bragged about killing Americans. (Terry Boyd / S&S)

BAGHDAD &#8212; To pressure terror cell organizers and insurgent financiers, it falls to soldiers to go after vulnerable second-tier figures.

Grabbing peripheral players is &#8220;like cutting the strands on a spider web until it collapses in on itself,&#8221; said Capt. Steve Marr, Company D, Troop D commander, 2nd Platoon of the 1st Cavalry Division&#8217;s 9th Cavalry Regiment.

But Marr and others say working intelligence from informants is a broad, imprecise, often inefficient &#8212; but vital &#8212; effort that requires perseverance, and more than a little bit of luck.

The &#8220;schoolhouse definition&#8221; of human intelligence is anything derived by analyzing information from human sources overtly or covertly, said Capt. Brian Cunningham, who works in 2nd Brigade intelligence, or S-2. Every U.S. soldier is an intelligence collector, Cunningham said.

While every soldier may be an intelligence agency of one, intelligence gathering is directed and assessed by trained human intelligence teams, Cunningham added. Brigade and battalion commanders are allowed to talk to informers who come forward, but only human intelligence officers &#8212; technically, force protection teams trained at Fort Huachuca, Ariz. &#8212; can run informant networks.

Since Joshua sneaked spies into Jericho, armies have been gathering intelligence, Cunningham said. Historically, that meant battlefield intelligence &#8212; counting enemy tanks or interrogating prisoners of war to get information on enemy position, strength, weaknesses and goals, he said.

In unconventional warfare, the emphasis shifts to counterintelligence for force protection &#8212; that is, getting terrorists before they lay a roadside bomb or set an ambush.

The Army will pay for accurate information, he said. If an informer leads soldiers to a weapons cache, for example, the Army pays a cash reward.

However, officials can&#8217;t punish those whose information proves worthless.

Intelligence teams look at informants&#8217; motives, vetting them to determine the reliability of their information, Cunningham said.

Informants acting out of love of country;

Those looking for financial gain;

People wanting to remove terrorists from their neighborhoods;

People wanting to clear insurgents out of their neighborhoods make up the largest category, Cunningham said. Trying to use soldiers in vendettas is more typical than trying to cash in.

But informants come to U.S. forces for all sorts of reasons, he added.

Most informants &#8212; for whatever reasons &#8212; are unreliable, said soldiers and officers, and under the best of circumstances, intelligence doesn&#8217;t yield immediate returns.

Information typically is two hours to two weeks old, Cunningham said. It isn&#8217;t as if units get information that allows them to go stop terrorists who just fired mortars or detonated a bomb.

That said, informants have led to weapons, and even to a small training camp where insurgents were caught learning to use rocket-propelled grenades, Cunningham said.

Sometimes, luck and persistence are more valuable than informants.

During a recent random traffic stop, 1st Lt. Rich Groen, 1st Platoon leader, Troop D, and his soldiers and translators found a car full of anti-coalition materials, including a list with addresses of Iraqis that division officials are trying to arrest.

But developing good intelligence takes time and expertise that the Army often doesn&#8217;t have, said retired Col. Patrick Lang, a former Special Forces officer and the former chief of human intelligence for the Defense Intelligence Agency.

Marr and others don&#8217;t debate that conventional forces struggle with the intel mission.

As scouts, he and his soldiers have no formal training in developing intelligence networks, Marr said. But that&#8217;s also &#8220;the beauty of the American soldier,&#8221; he added. &#8220;He adapts to the situation and comes up with own inventive ways to doing it.