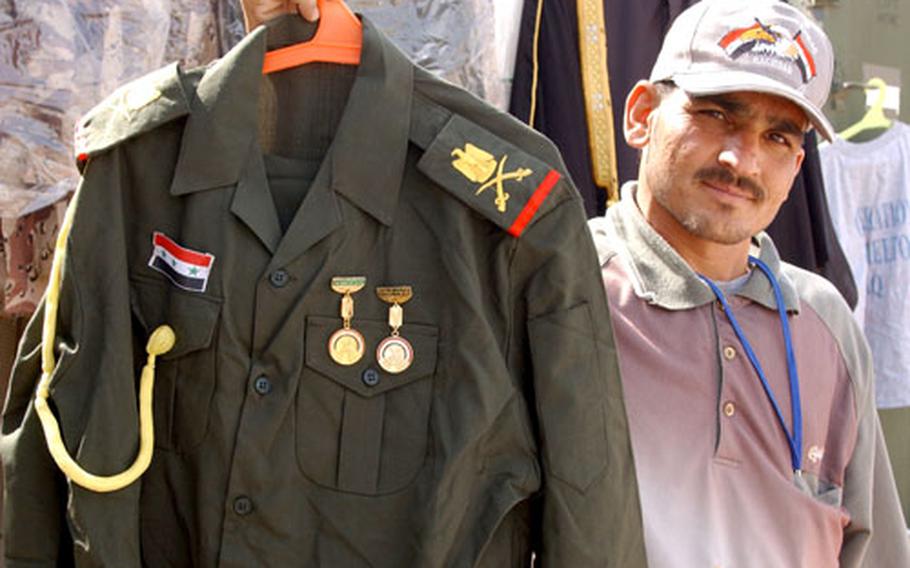 An Iraqi vendor shows off a military uniform from Saddam Hussein’s army, an example of a war souvenir U.S. troops can take home, if they have a receipt. (Jeff Schogol / S&S)

CAMP ANACONDA, Iraq &#8212; Spent shell casings may look like a good memento from Iraq, but they are one of the many items U.S. troops are prohibited from taking home as war souvenirs.

The military allows servicemembers to collect certain souvenirs if it doesn&#8217;t distract from their duties or put them in danger, said Capt. Chris Augustine, a spokesman for U.S. Central Command.

&#8220;Whereas the retention of a shell casing may appear to be a harmless and valued memento of service, a policy permitting the collection and retention of enemy shell casings may encourage service members in the pursuit of these souvenirs to venture into unsecured areas or otherwise engage in unsafe behavior,&#8221; Augustine said in a Friday e-mail to Stars and Stripes.

All souvenirs have to go before a reviewing officer, Lt. Col. Dwight Warren, judge advocate at Camp Anaconda, said.

&#8220;A soldier should never purchase an item without obtaining some kind of receipt showing the date, place and source of purchase,&#8221; he said.

Without a receipt, keepsakes can be confiscated by customs officials.

Navy Lt. Rory Russell, company commander of the customs office at Camp Anaconda, said he advises servicemembers not to try to sneak prohibited items out of the country.

Firearms, rockets, grenades, explosives, munitions, and components of all of these items.Club-type hand weapons such as batons, blackjacks, brass knuckles or nunchakus.Concealable knives and switchblades and any other kind of knife with an automatic blade opener, weight or swinging motion for opening the blade.Military equipment not designed to be issued to or carried by an individual soldier.Scientific, archaeological, religious, historical or other relics.Sand, dirt, rocks, gravel, plants or animals.Personal items belonging to the enemy.Permitted war souvenirs are &#8220;common enemy military items that have little or no value&#8221; and have to be acquired legally, such as by capturing them or finding them abandoned, Warren said in an e-mail last week to Stripes.

He said permitted items include: