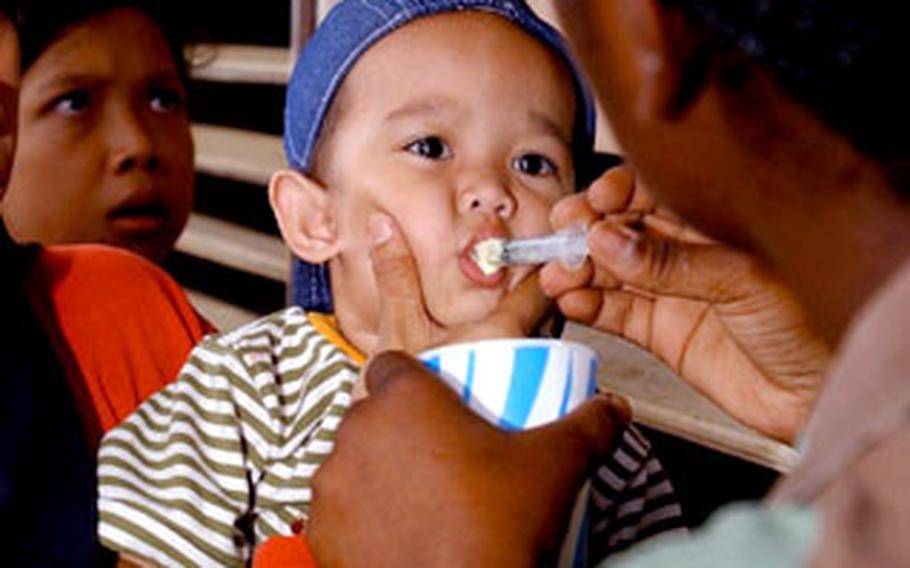 Villagers from the town of Tiptipon pose with Marines and sailors from the 31st Marine Service Support Group before they leave the island for the amphibious dock landing ship USS Harpers Ferry. (Brian P. Biller / U.S. Navy) Balikatan is done, but not so the mission to win hearts and minds in the southern Philippines.

U.S. military officials have called it &#8220;waging peace,&#8221; and so far it&#8217;s working, they say, pointing to the example of a relatively peaceful Basilan, a former Abu Sayyaf stronghold.

The task force has maintained a continuous presence in the southern Philippines since July 2002, with people rotating in and out about every six months, said Army Lt. Col. Mark Zimmer, task force spokesman.

The mission is counterterrorism.

Two groups the United States is concerned about are Abu Sayyaf and Jemaah Islamiyah, the Southeast Asian terror cell linked to al-Qaeda.

The U.S. attacks the problem from two sides, but hardly literally. The task force shares information, techniques and tactics with the Philippine military, but it&#8217;s not directly involved in combat operations, Zimmer said. While the Armed Forces of the Philippines goes toe-to-toe with the insurgents, the task force plots its next move: where to deliver free medicine, build schools or dig wells.

Wary at first, Filipinos respond to troopsDuring the recent Balikatan exercise, the AFP combined with U.S. servicemembers to bring medical care to more than 11,000 Filipinos and build four elementary schools on Jolo, the first time the military has conducted such projects on the predominantly Muslim island.

Security provided by the AFP was tight. Medical personnel were flown back and forth from a Navy ship and other U.S. and AFP members bunked at a Philippine military camp, riding in armed convoys to the sites at Panamao, Jolo City and Maimbung.

Cysts were removed, medications for skin rashes were prescribed, eyes and teeth were examined, eyeglasses were distributed, and even goats and cows received check-ups or vaccinations.

People initially were resistant and suspicious of the Americans, Zimmer said, but &#8220;after they see what it&#8217;s all about, there&#8217;s an overwhelming positive response.&#8221;

Due to the security situation on the island, few nonmilitary journalists observed the projects. A few Philippine journalists were flown in by the U.S. Embassy, including one from the Philippine Star who described this scene in Panamao last month:

&#8220;The previous day, many villagers had watched warily from a distance, waiting for neighbors to tell them how the MEDCAP was being conducted by the foreigners. A woman, defying her husband who did not trust the Americans, went with her children on the first day and came away satisfied with the health care she received for free &#8212; a rare treat on the impoverished island.&#8221;

The Balikatan civic action projects on Jolo were the joint task force&#8217;s biggest of the year, but more are planned &#8212; about two a month throughout the region, though on a smaller scale. The task force hopes to build recreation centers, improve roads and complete a water project with the U.S. Agency for International Development on Jolo.

Other groups that help fund projects include U.S. Pacific Command, nongovernmental organizations, private donors and the government of the Philippines, Zimmer said.

A model for better cultural communicationMilitary officials hope to make similar inroads on Jolo as they did in Basilan, where in 2002 the AFP, supported by U.S. troops, chased out the Abu Sayyaf and built roads, bridges, artesian wells, even an airstrip.

&#8220;We talk about the Basilan model as an example of real success in the Philippines,&#8221; Zimmer said, depriving terrorists of their sanctuary and &#8220;providing people with an alternative to lawlessness and violence.&#8221;

The operations in Basilan jump-started economic development on the island, Zimmer said, making it safe enough for nongovernmental agencies and private businesses to come in.

&#8220;If you compare the state of things in the Sulu archipelago area before the Balikatan exercises were shifted there, then there is definitely a tremendous improvement in terms of the peace and order &#8230; today,&#8221; he wrote in an e-mail. &#8220;The Abu Sayyaf has suffered militarily but also has lost much of its political influence in the Basilan-Sulu area.&#8221;

Abinales said the southern Philippines includes some of the poorest provinces in the country, &#8220;long forgotten by Manila and given only cursory attention by the Muslim political elite. Hence it is also understandable why two separatist rebellions have broken out in these provinces. The effect of the U.S. presence in these areas can be found in the universal appreciation for schools rebuilt, health facilities improved, roads rebuilt.&#8221;

He added: &#8220;These may be temporary measures, but to these communities they are more than what their leaders and Manila had given them. That gratefulness has been translated to a fairly high degree of support for U.S. presence in Sulu and Basilan, which nationalists in Manila are unable to explain up to now.&#8221;