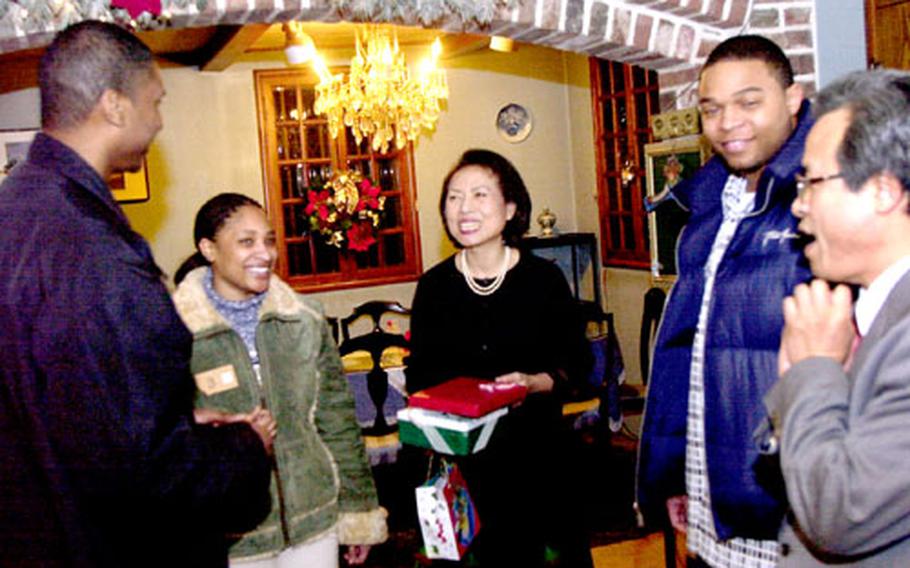 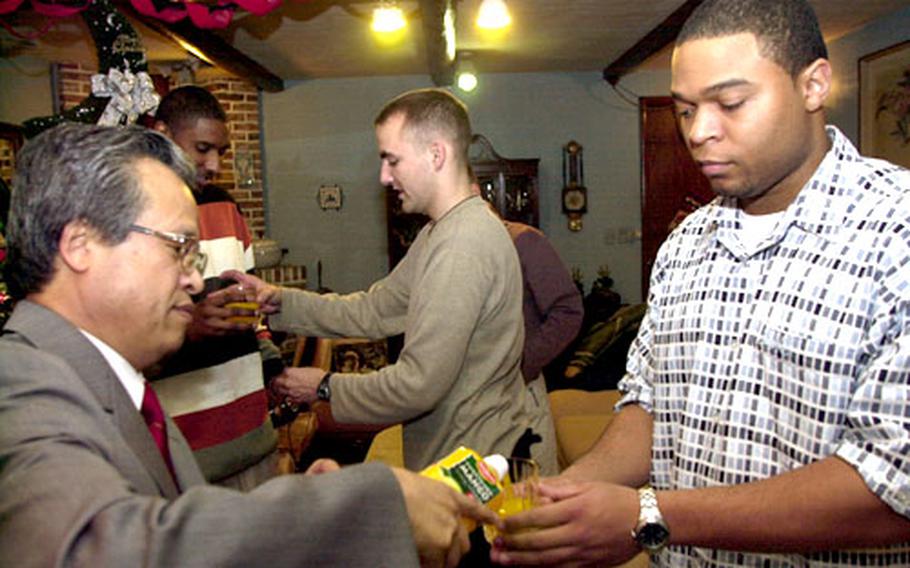 YONGSAN GARRISON, South Korea &#8212; Senior Airman Theyer Castro dropped a large piece of lettuce in his lap while attempting to dive into his salad with silver chopsticks during dinner with his South Korean host family Thursday night.

Castro was among 300 U.S. Forces Korea servicemembers who shared dinner with Korean host families in a unique holiday program. While many servicemembers take leave during the holidays and return to the United States, most spend it in South Korea without wives, husbands, children and relatives.

It&#8217;s one of the tougher parts of being in the military, they&#8217;ve indicated. But about 100 Korean families &#8212; saying they appreciate the sacrifice U.S. troops make &#8212; wanted to give the servicemembers some holiday cheer and warm family feeling.

So at City Hall on Thursday afternoon, hundreds of servicemembers used sticky notes with numbers on them to find the Korean families who were hosting them, two to three servicemembers per family.

They then heard caroling in Korean and comments from 8th Army commander Lt. Gen. Charles Campbell, U.S. Ambassador Thomas Hubbard and Seoul city Mayor Lee Myung-bak, who said the home visit program helps servicemembers experience Korean culture and customs while also showing South Korea&#8217;s appreciation to them for &#8220;what we are today.&#8221;

The families then took the servicemembers home for a three-hour dinner. In a country in which families rarely bring foreigners into their homes, the meal qualified as an intimate bonding session.

Call it dinner with the Kims. And the Parks. And the Lees. Throw in kimchee, traditional Korean food and a bunch of smiles, and you&#8217;ve got a new adopted Korean family.

Castro &#8212; with Senior Airmen Demetrius Wilburn and Debbie Jackson &#8212; spent time with the family of Kim Sang-chul, a former Seoul mayor and human rights attorney who now heads a committee for North Korean refugees and publishes his own newspaper.

The ebullient Kim is fervently pro-American and unabashedly critical of North Korea, attributing South Korea&#8217;s prosperity to its relationship with the United States.

Dinner conversations drifted: What is it like growing up in Korea? What are the schools like? Where are good places to ski in South Korea? What kind of music do you listen to?

Se-ho, who has visited the United States on vacation, said he still enjoys listening to rock on the American Forces Network.

The airmen at the Kims were treated to a home-cooked spread including many Korean dishes rarely served in restaurants: fried pumpkin, scallops with hot peppers, clear glass noodles with peppers, salmon wrapped in radish, fresh square kimchee, fried fish, spicy Korean-style soup and a plate of fresh fruit.