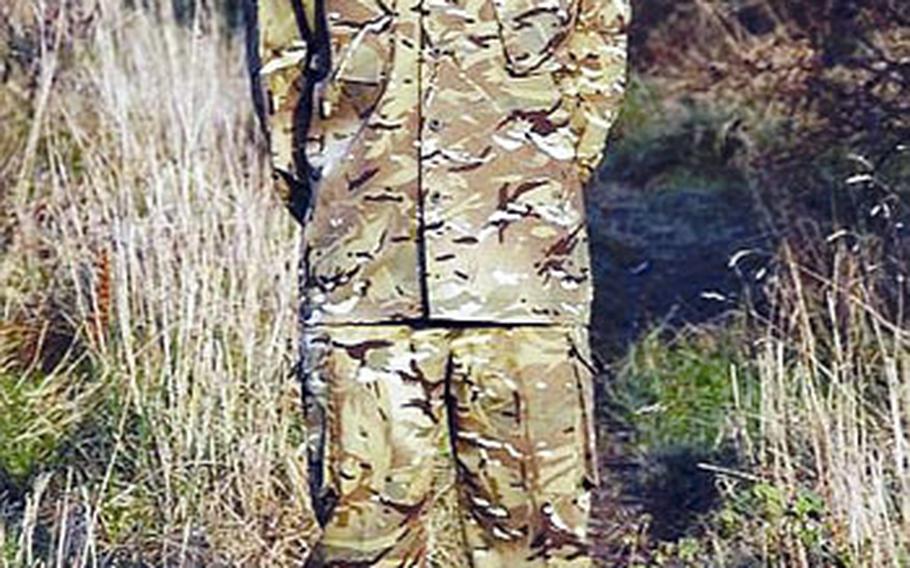 The new Multi Terrain Pattern camouflage uniform to be issued to the British armed forces in certain areas of Afghanistan is similar to the “MultiCam” pattern being tested by U.S. troops in Afghanistan. (Photo courtesy of the British Ministry of Defence)

GRAFENW&#214;HR, Germany &#8212; British and American soldiers soon could be hard to tell apart if the U.S. Army adopts a camouflage pattern similar to one that the British have already picked out to conceal their troops in Afghanistan.

U.S. soldiers with 2nd Battalion, 12th Infantry Regiment in eastern Afghanistan are wearing new uniforms featuring the "MultiCam" camouflage pattern as part of a trial conducted by the Army to determine the best way to help troops blend in with their environment.

Last week the British Ministry of Defence announced that its troops would soon start wearing a new uniform with a version of MultiCam dubbed the "Multi-Terrain Pattern."

Uniforms in the new pattern will be issued to troops with 4 Mechanized Brigade deploying to Afghanistan in March. The uniforms will later be introduced across all three services, the ministry said in a statement posted on its Web site.

"This new camouflage will help our troops blend into different environments in Helmand province to stay hidden from the Taliban," British Defence Secretary Bob Ainsworth said in the statement. "Patrols take our troops through the Green Zone, scrubland, desert and arid stony environments and it is crucial that the camouflage can work across all of them."

The U.S. Army is testing MultiCam alongside a version of the digital Universal Camouflage Pattern already featured on the Army Combat Uniform.

Sgt. Michael McCormick, 23, of San Diego, said Monday that he&#8217;s wearing the new version of the digital uniform, which has "coyote brown" splotches, on patrols with 4th Brigade, 82nd Airborne Division out of Kandahar, Afghanistan.

But he said he prefers the MultiCam pattern that other soldiers are testing because it&#8217;s not digital and therefore blends in better with Afghan terrain. He added that any new uniform should do away with the fabric fastener pockets and attachments that are on his ACUs.

"[The fabric fastener] gets dusty or dirty and it doesn&#8217;t work anymore. You can&#8217;t keep your sleeves or collar down and it&#8217;s not tactical. If you have to adjust something during a mission it makes a loud noise," he said.

The prospect of being mistaken for one of his British counterparts doesn&#8217;t faze McCormick.

"I&#8217;ve worked a lot with the Brits, especially on my last deployment to Afghanistan," he said. "A common [camouflage] scheme wouldn&#8217;t be bad in any shape or form. It&#8217;s not like the Afghans know the difference between British and American soldiers."

And a common uniform might provide a psychological advantage over the Taliban, who would be unable to use knowledge about a particular nation&#8217;s standard operating procedures when planning attacks, he said.