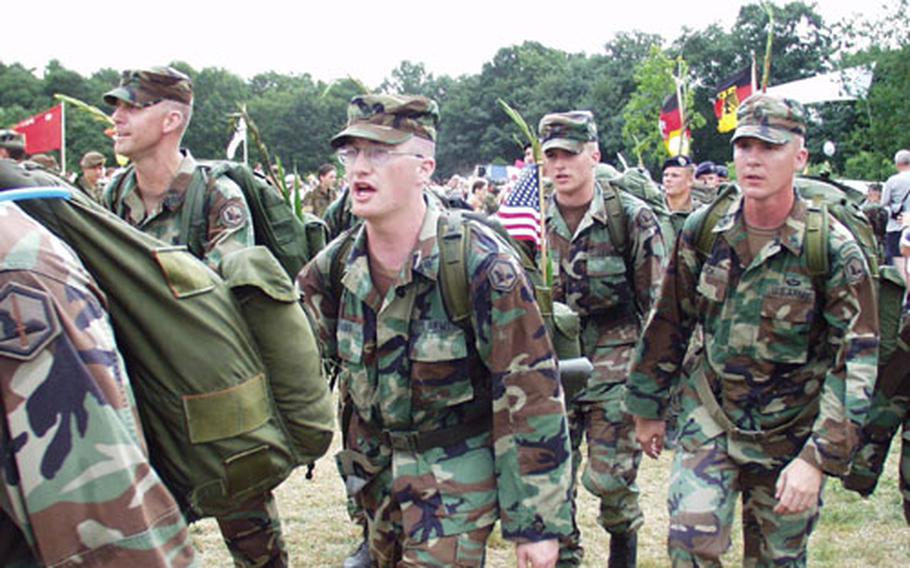 Staff Sgt. Kevin Holland is too proud to say it, but his face twists with pain as a medic treats his swollen right foot.

Holland exhales Lamaze-style again and again while Sgt. Deane Bostick sticks a needle between his toes and drains a blister as fat as a raspberry.

This is the end of the second day at the 87th annual Four Days Marches at Nijmegen, the Netherlands. Holland, Bostick and 10 others from the 201st Forward Support Battalion came here from Vilseck, Germany, to test their mettle on the 100-mile course.

They&#8217;re recovering at a Dutch military camp set up for the 4,500 military participants from 19 countries. Another 40,000 civilians from 61 countries also are marching this year.

&#8220;This is the place where you can find where your limit is,&#8221; Holland said Wednesday night between gulps of anesthetizing beer, explaining why on Earth he would want to march 100 miles in four days carrying a 22-pound rucksack.

When Bostick injects Holland&#8217;s foot with a pain-killing tincture, Holland writhes so violently that he breaks the metal bar on his lawn chair and nearly falls on the ground.

He recovers and drinks more beer.

More than 250 American soldiers and airmen are making the march. Camp Heumensoord is the end of the line every day after the eight-to-12-hour walk through Nijmegen&#8217;s streets, lanes and farm fields.

After the weary cadence calls and heavy footfalls disappear in the hot air, marchers talk about their feat. Then they plan the next day&#8217;s round of walking and treat their aching, swollen, bloody feet.

Spc. Nicholas Hilt extends his arm over the table. His hand is shaking because he&#8217;s so dehydrated.

Inside the lodging tent you can feel the thump of a live band at a nearby beer hall, where plenty of marchers are enjoying a brew before bed.

Michel Meems, a Dutch army soldier, jumps up from his curbside seat to dance a little jig.

A few Americans are joining in the party, but they weren&#8217;t hitting the road Thursday.

&#8220;The doctor told me not to go,&#8221; said Senior Airman Kyle Luker, who works at U.S. Air Forces in Europe headquarters in Ramstein, Germany. His lower legs are so swollen that his ankles have disappeared.

His buddy, Tech. Sgt. Steven Schoen, tries to take off his sandals to show the damage to his feet, but they&#8217;re so swollen the shoes are stuck.