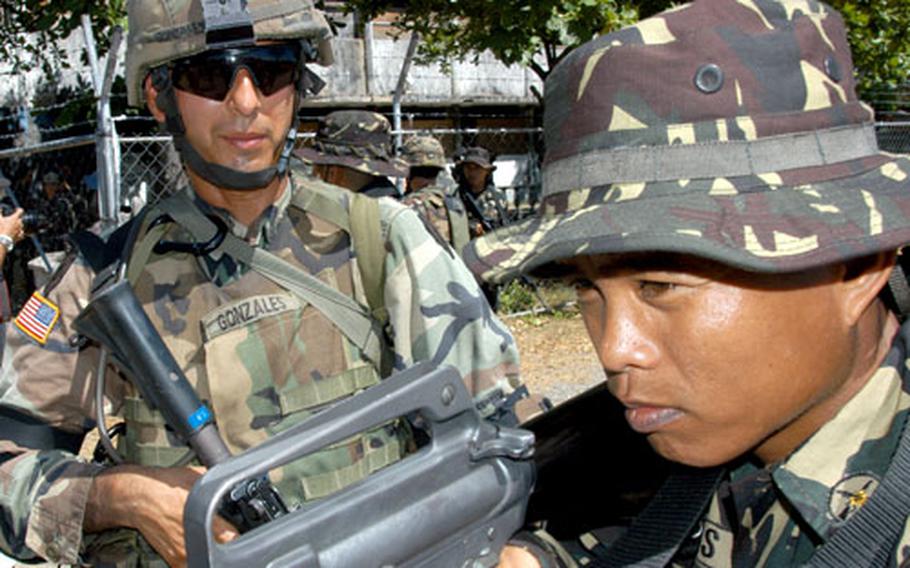 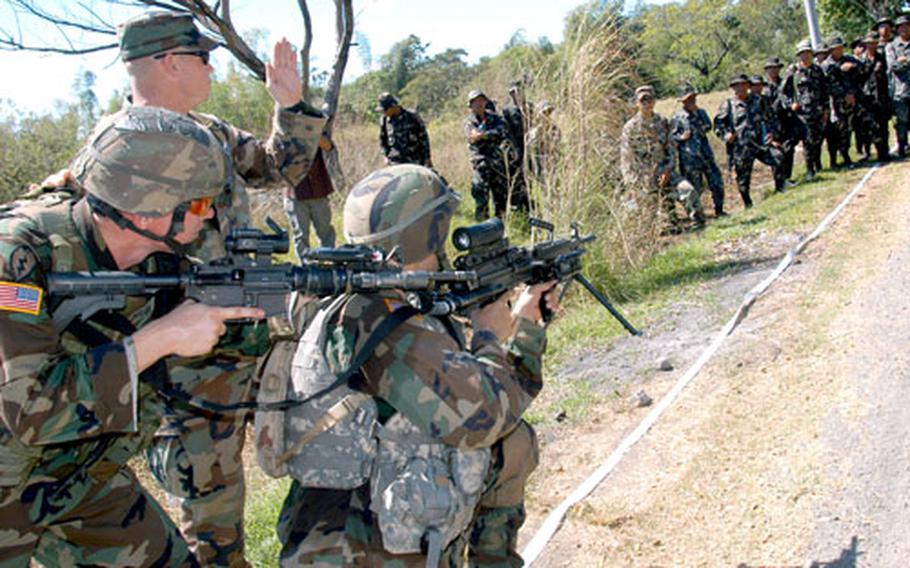 FORT MAGSAYSAY, Philippines &#8212; Lessons learned in Iraq are guiding some of the training between U.S. soldiers and their Philippine counterparts in the annual Balikatan military exercise.

On Tuesday, at a remote Philippine army base east of Clark Air Field, members of Alpha Company, 1st Battalion, 14th Infantry Regiment &#8212; a unit with the 25th Infantry Division from Hawaii &#8212; began four days of training in urban warfare tactics.

Their students, part of the Philippine Armed Forces&#8217; 45th Infantry, know how to fight in the jungle, said their battalion commander, Lt. Col. Eddie Maningding. But, he added, &#8220;We are not used to this kind of scenario, fighting in an urban area.&#8221;

Weapons familiarization was first. While the Philippine army uses some of the same weapons as the U.S. military, its guns aren&#8217;t retrofitted with the latest technology, such as infrared lasers that help soldiers hit targets in the dark. A program, however, already is in place to upgrade the Philippine army&#8217;s equipment.

The urban warfare training focused on how to move in and around buildings and how to enter a building. A door isn&#8217;t always the first choice. A portable ladder can be used to climb in a window, a better option sometimes because of the element of surprise, said Capt. Jim Pangelinan, Alpha Company commander. One theory is that it&#8217;s also more advantageous to attack higher to lower inside a building to flush the enemy out instead of fighting him indoors.

If a door won&#8217;t budge, the Philippine soldiers observed, a sledgehammer or machine gun can be used to break open the lock, along with explosives.

With a gravel road as an alley and a fence gate as a doorway, Philippine soldiers in small groups walked silently in single file, their weapons and eyes constantly changing direction. A U.S. soldier watched, giving instruction and feedback.

Maningding said most of his soldiers are fighting the New People&#8217;s Army, a communist insurgency in the mountains of northern Luzon &#8212; an ongoing conflict since 1968.

&#8220;We share our knowledge to your guys on how we do our battle,&#8221; he said, noting Balikatan was an exchange of strategies and tactics between the two militaries. &#8220;We learn from them and they also learn from us.&#8221;

In the streets of Samarrah, Iraq, Pangelinan&#8217;s Alpha Company resorted to explosives only as a last resort when going house to house.

&#8220;Lessons we learned in Iraq: You don&#8217;t go straight to demolitions&#8221; since civilians may be on the other side, he said, increasing the possibility for collateral damage.