Cars burn outside a restaurant in Baghdad, Iraq, on New Year&#39;s Eve after a powerful car bomb went off, killing five patrons and injuring more than 30 other people. The blast brought troops of 1st Armored Division to the scene. (Franklin Fisher / S&S)

Cars burn outside a restaurant in Baghdad, Iraq, on New Year&#39;s Eve after a powerful car bomb went off, killing five patrons and injuring more than 30 other people. The blast brought troops of 1st Armored Division to the scene. (Franklin Fisher / S&S) The hands of a clock are stopped at 9:18, about the time a powerful car bomb ripped through the Nabil restaurant in Baghdad, Iraq, while it was crowded with New Year&#39;s Eve diners. (Franklin Fisher / S&S) 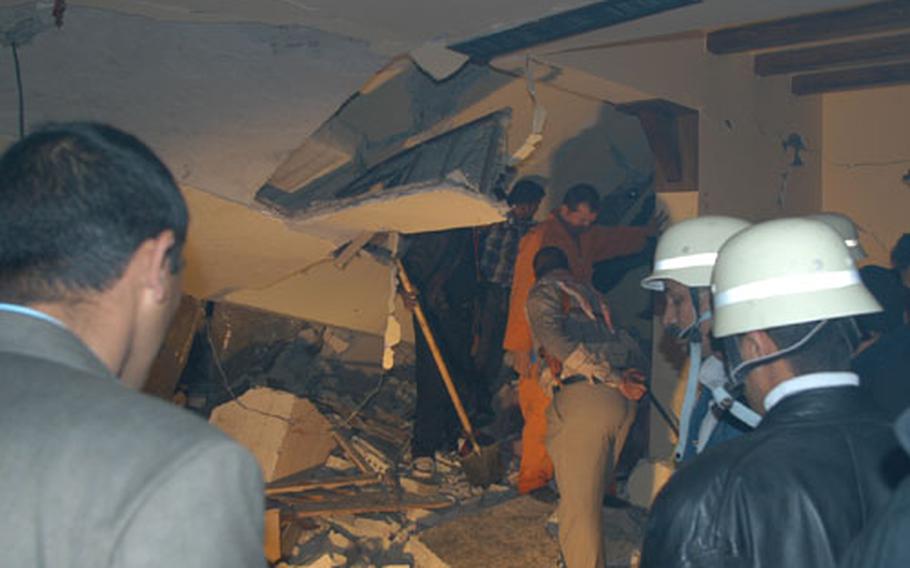 Rescuers continue digging for bodies beneath the rubble of the Nabil restaurant in Baghdad, Iraq, on New Year&#39;s Eve after a car bomb blast. The explosion killed five Iraqis and injured more than 30 other people, some of them Westerners. Troops from the 1st Armored Division led the rescue effort. (Franklin Fisher / S&S)

BAGHDAD, Iraq &#8212; The troops in their Humvees first saw the big light from across town, then the deep boom.

The squad&#8217;s Humvees wound through Baghdad&#8217;s streets toward the towering column of smoke.

They pulled up outside the broken walls of the Nabil restaurant amid a frantic scene of flames, broken glass, bleeding victims and shouting Iraqi police. Cars burned in a row outside the restaurant, in the city&#8217;s upscale Karrada section.

What Ratledge would see over the next few hours appalled him. But he knew he&#8217;d need to keep calm, stay focused, and let his training take over.

Sections of wall and ceiling had caved in. A steel beam hung exposed. Dining tables and chairs lay upturned. A wall clock hung aslant, its hands motionless at 9:18.

One of the victims was just inside the break in the wall on the blast side of the building. It was an Iraqi woman in a Muslim head scarf, buried chest high in rubble.

A few feet over, a man sat slumped and lifeless like a broken department store mannequin, a gash across the top of his head.

Troops and Iraqi rescue workers started pulling away chunks of masonry and other debris.

The woman died, but the rescuers in that corner of the restaurant kept digging, looking for victims.

Meanwhile, outside, firetrucks, ambulances and other emergency vehicles continued arriving, sirens going, lights flashing. Iraqi police, some calm but others keyed up, worked to push back crowds of onlookers and reporters who had converged on the scene.

The blast killed eight Iraqis and injured 35 other people, some of them Westerners. No U.S. troops were injured.

For Callan, the squad leader, the bombing was just the latest instance of how the guerrilla insurgency has brought danger and uncertainty to the people of Baghdad, and the troops who have the job of patrolling the city.