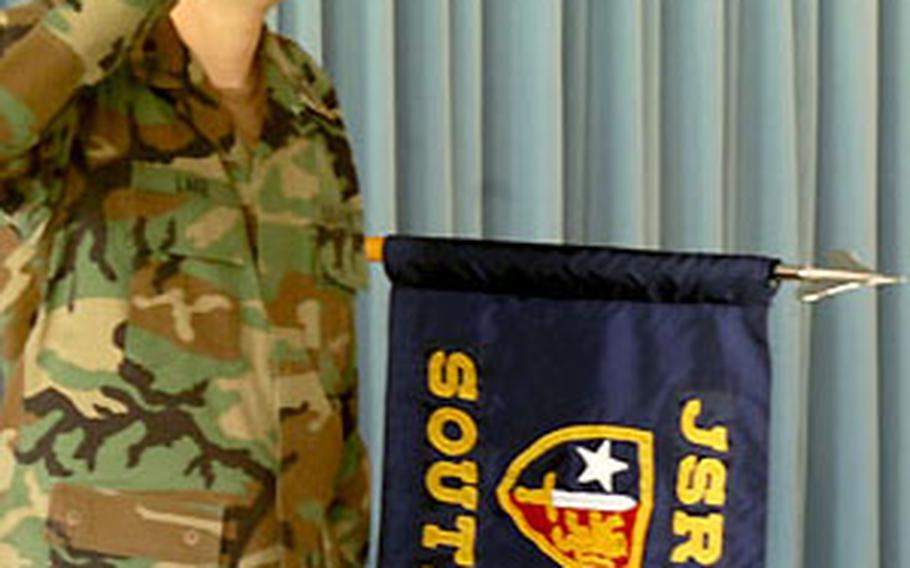 During a deactivation ceremony Wednesday, First Sgt. Robert Lake, commander of the detachment of Army soldiers assigned to Verona, Italy, salutes as the national anthem is played. A few minutes later, Joint Command South’s colors were folded and put away. (Kent Harris / S&S)

PARONA, Italy &#8212; Bob Generelli didn&#8217;t have to search far for inspiration. He borrowed an expression from one of the world&#8217;s most famous authors to sum up his feelings.

&#8220;Like Shakespeare said, &#8216;Parting is such sweet sorrow,&#8217;&#8221; the 78-year-old icon of the U.S. military community of Verona said Wednesday after the deactivation ceremony of the last Army unit in the city of Romeo and Juliet.

However, the impending American military departure from the city it has called home for parts of seven decades can&#8217;t be blamed on a lovers&#8217; misunderstanding or warring families. Quite the opposite. Decades of relative peace on the European continent have caused NATO to re-evaluate its force structure.

As a result, Joint Command South in Verona had its official closing ceremony Tuesday. It closes up operations at the end of the month. The Army&#8217;s small detachment &#8212; which has grown even smaller recently &#8212; furled its unit flag for the final time Wednesday.

&#8220;For most of us, the mission is over in Verona,&#8221; Lt. Col. Barry Keith, the senior American military officer in Verona, told a small gathering that included about half the 50 or so American troops left in the city.

&#8220;We will move on to other parts of the world to serve our country and protect our way of life. But we will take a little piece of Verona with us.&#8221;

For Keith, chief of plans and policies for the NATO mission, that means heading to Joint Command Lisbon in Portugal, another NATO mission that&#8217;s undergone some changes. First Sgt. Robert Lake, who&#8217;s also been acting as the detachment commander, is going to school in the States to become a sergeant major. Lt. Col. Brent Penny will soon be southbound for a job at Joint Forces Command Naples.

Eight Americans will stay to finish their tours: three soldiers, three airmen and two sailors. But by 2006, there might not be any active-duty servicemembers left in Verona. The small NATO missions that are continuing in the city don&#8217;t have any Americans assigned to them.

It&#8217;s quite a change for people such as Generelli, who arrived in Verona in the mid-1950s as a soldier. A teacher before joining the Army, he met his wife, Alma, in the city and decided to stay. He was a teacher and principal for the Department of Defense Dependents Schools in Verona for 34 years. Since retiring in 1992, he&#8217;s worked for the Morale, Welfare and Recreation department.

Generelli and the handful of other employees at the small compound that houses the recently closed school, shoppette, post office and community center, have been told they can have jobs in the Vicenza military community.

The compound&#8217;s fate has still not been sealed. It&#8217;s the last vestige of a once-large community in the city. There were once three schools with more than 800 students, compounds spread around the city and even a pair of campgrounds reserved for U.S. forces on the shores of nearby Lake Garda.