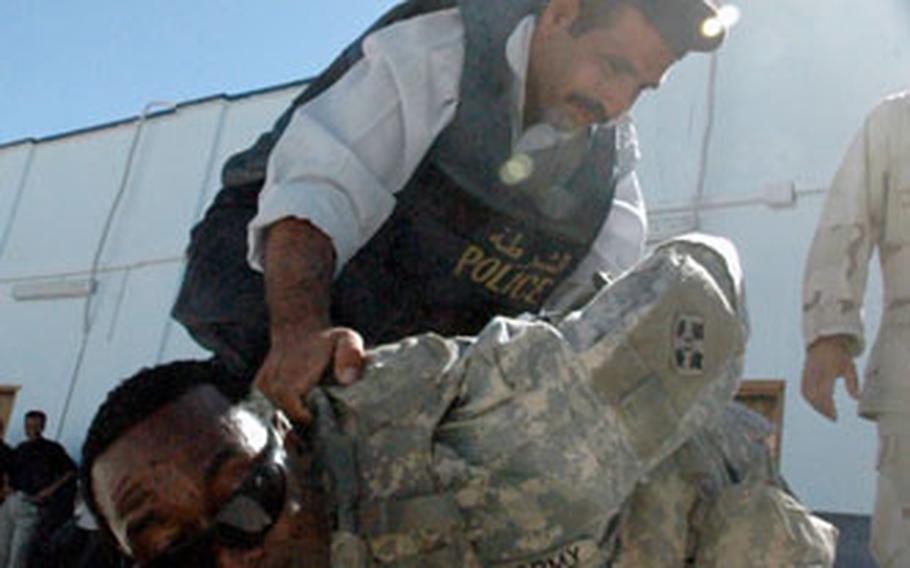 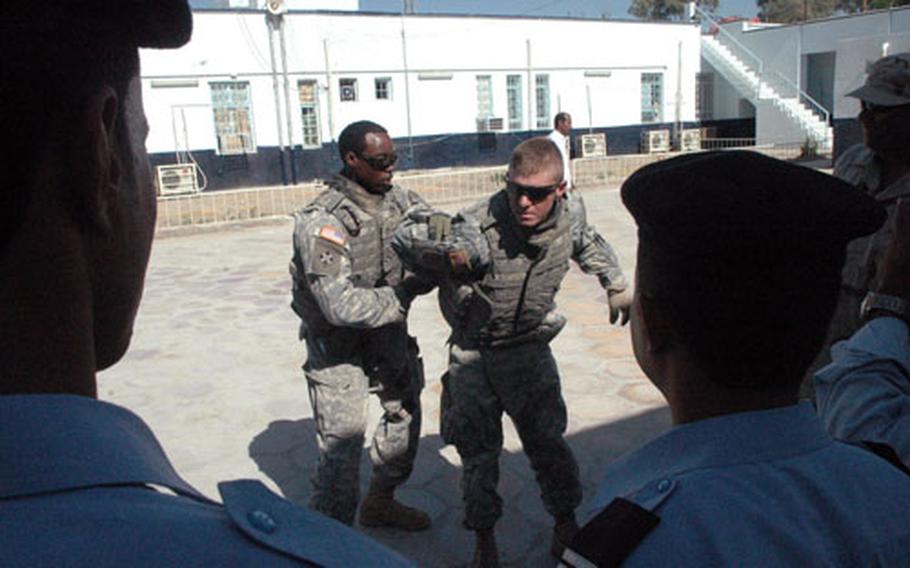 Soldiers with the 1-67 Armor Regiment demonstrate to Iraqi police how to subdue a suspect recently in Musayyib, Iraq. (Monte Morin / S&S)

MUSAYYIB, Iraq &#8212; It was, in Capt. Irvin Oliver&#8217;s view, the low point for local Iraqi police commanders and patrolmen.

After more than 10 months of deferring operations and avoiding conflicts with a growing number of Mahdi Army militants in this city of 300,000, the police force disappeared entirely the moment militiamen kicked off a seven-hour gun battle with U.S. troops here.

The battle, which occurred on July 22 and involved more than 100 heavily armed militiamen, was the largest single sustained episode of fighting the 4th Infantry Division has experienced yet in Iraq, and involved nearly an entire armor battalion.

But U.S. troops now believe that a revamped police force has grown by leaps and bounds.

The July episode began when Shiite militiamen overwhelmed a police checkpoint, stole a police truck and then did the same to another checkpoint. When a U.S. patrol was sent to investigate what was happening, it found itself under attack by scores of militia men toting rocket-propelled grenades and Kalashnikov rifles.

Armed with Abrams tanks, Bradley Fighting Vehicles, attack helicopters and Hellfire missiles, responding U.S. forces killed more than 35 militiamen in a pitched battle that echoed throughout the city. &#8220;It was a major tactical success,&#8221; Oliver said of the battle that day. &#8220;But it exposed a lot of weaknesses. The [police] had a horrible showing that day. They just disappeared. We were fighting and wondering &#8216;Where are the blue suits?&#8217; When the city needed them the most, they were gone.&#8221;

Oliver, 32, of Killeen, Texas, commands Company D of the 1st Battalion, 67th Armor Regiment, and said he had all but written off the police department in this city along the Euphrates River, about 35 miles southwest of Baghdad.

After replacing the district police commander however, Oliver said he&#8217;s seen a vast improvement in the police force, which U.S. officers hope to develop into a fully integrated Shiite-Sunni police district.

The department, which currently consists of roughly 70 Shiite officers, still has a way to go before it&#8217;s half and half. But Oliver and other U.S. commanders say it&#8217;s critical to establish an even mix here, because the district straddles the fault line that separates Shiite and Sunni Muslim territories south of Baghdad.

Oliver said the main problem with the previous police force is that its commander was unwilling to take the lead in anti-insurgent and anti-crime operations and looked to U.S. soldiers to fill that role.

Oliver said he&#8217;s seen a vast improvement in the police force since the change in command. In the same vein, Salah said he&#8217;s seen an enormous change in public opinion since the July 22 battle between U.S. forces and the Mahdi militiamen. He said local residents are loath to see another flare-up of hostilities in their town. &#8220;Right now, most of the civilians hate those people,&#8221; Salah said. &#8220;They see them as troublemakers. Right now their reputation is zero.&#8221;