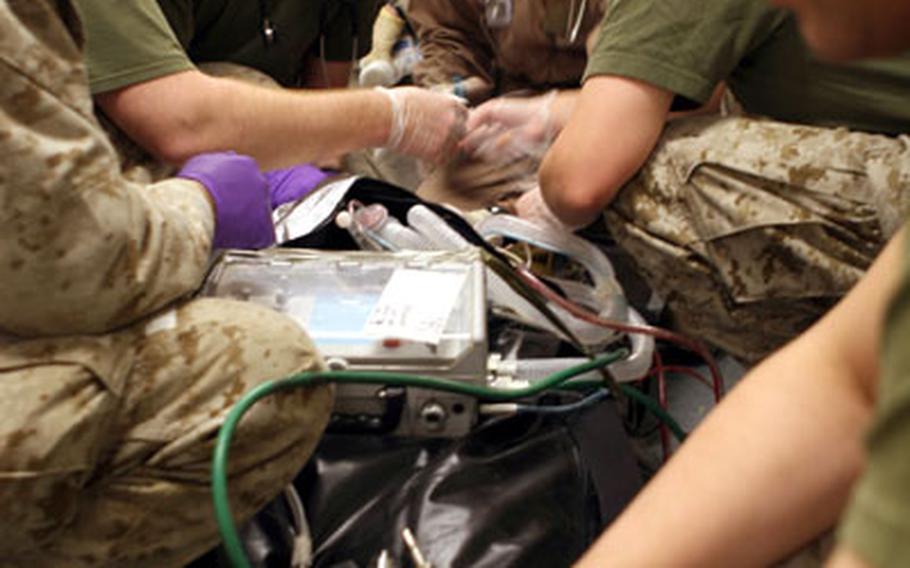 Medical personnel at Taqaddum’s surgical detachment treat a victim of a Feb. 24 suicide truck bomb blast. This patient was one of 50 Iraqis who were treated here. (Courtesy of U.S. Marine Corps) The crack of the explosion reverberated around Camp Taqaddum. A suicide truck bomb had exploded about 1&#189; miles outside the gate in Habbaniyah &#8212; a town 40 miles west of Baghdad where the Marines and sailors of 9th Engineer Support Battalion from Okinawa often work.

The blast was only about 1,000 yards from their last work site.

&#8220;You could see the plume and the fireball from here,&#8221; said Chief Petty Officer Jeff Weeks, who, along with several other members of the 9th ESB, discussed Saturday&#8217;s attack by phone with Stars and Stripes. Weeks, senior corpsman for 9th ESB, said he went to the unit&#8217;s command operations center and heard patients were inbound and all medical personnel were needed.

The bomb went off Saturday at about 4 p.m. in a busy intersection near an open-air market, a school, an Iraqi police station and a mosque from which worshippers were exiting after evening prayer. Military officials said the exact target is unknown.

At least 31 Iraqis were killed and more than 75 were wounded, officials reported.

Weeks and seven other corpsmen with the unit rushed the two miles to the triage center. He said he worked a couple of other mass casualty incidents at Taqaddum during this deployment, but &#8220;nothing this bad before.&#8221;

&#8220;The [surgical shock treatment platoon] was filled wall to wall with people,&#8221; Weeks said. He described the scene as &#8220;a relay with convoys flying out&#8221; to the blast site to pick up the injured, the medical staff stabilizing the patients and then helicopters taking them to larger hospitals in Balad and Baghdad. &#8220;Everyone we treated was Iraqi &#8212; lots of children,&#8221; he said.

Many of the 25 to 30 patients they saw had shrapnel wounds and some had missing limbs.

&#8220;Basically our job was [to take care of] the patients that could be held off a little from surgery&#8221; and those recovering from surgery that day, said Petty Officer 3rd Class Cory Erhard.

But the 9th ESB corpsmen talked about it when they got back that night, he said, and the Marines and sailors at Engineer Village were still talking about it a few days later.

The unit&#8217;s chaplain, Navy Lt. Alan Snyder, said the response from the servicemembers was overwhelming.

Cpl. Nicole Hammerle, who works intel for 9th ESB, helped a 4-year-old girl who lost her right leg in the blast.

&#8220;She kept on getting anxious and moving around, and they needed somebody to sit with her and comfort her and keep her calm,&#8221; Hammerle said.

She said she spent about two hours holding the girl&#8217;s hand, rubbing her head and talking to her while keeping track of the five-minute increments between medication doses.

The girl was there with her mother and little brother, who both had shrapnel wounds, Weeks said.

One young boy in the line for the helicopters was surrounded by five Marines &#8212; one holding his IV bag, another his hand.

&#8220;Those five Marines were going to sit there and make sure that boy knew somebody cared,&#8221; Snyder said.

One of them told Snyder the boy&#8217;s name was Omar and he was in the fifth grade.

&#8220;There you are looking at a little boy who did nothing more than wanting to go to school or the mosque or the market,&#8221; Snyder said.