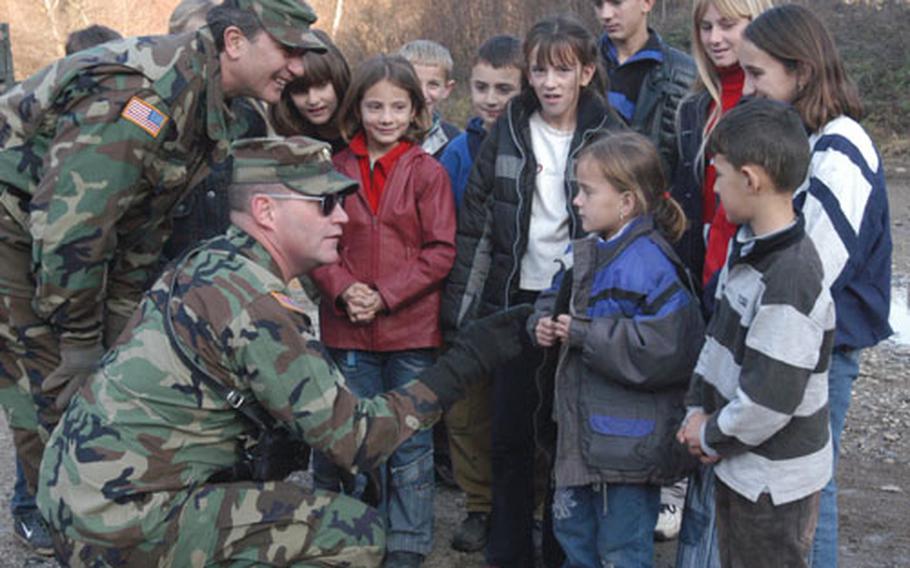 Maj. J.P. Moszer, squatting in front, talks to the children from the village of Rasevo, with help from translator Lujo Cvjetkovic. The children use a wooden bridge — which U.S. troops just rebuilt — to go to and from school. Although SFOR patrols and local military also use the bridge, the children will benefit the most. (Ivana Avramovic / S&S)

Maj. J.P. Moszer, squatting in front, talks to the children from the village of Rasevo, with help from translator Lujo Cvjetkovic. The children use a wooden bridge — which U.S. troops just rebuilt — to go to and from school. Although SFOR patrols and local military also use the bridge, the children will benefit the most. (Ivana Avramovic / S&S) 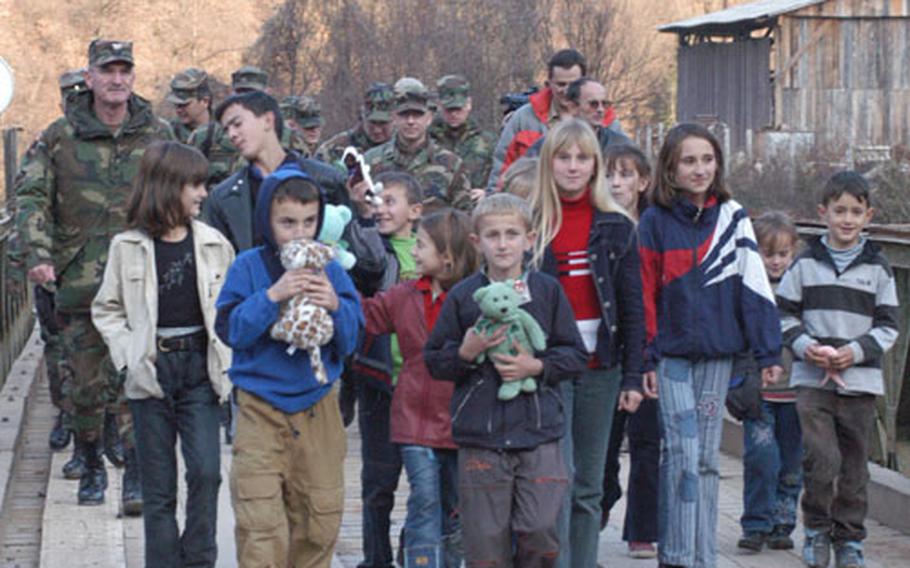 A dozen schoolchildren from Rasevo lead the way across the bridge U.S. troops repaired. Wooden boards on the bridge, used to take the children to and from school, were rotting away, making the bridge dangerous to use. (Ivana Avramovic / S&S) 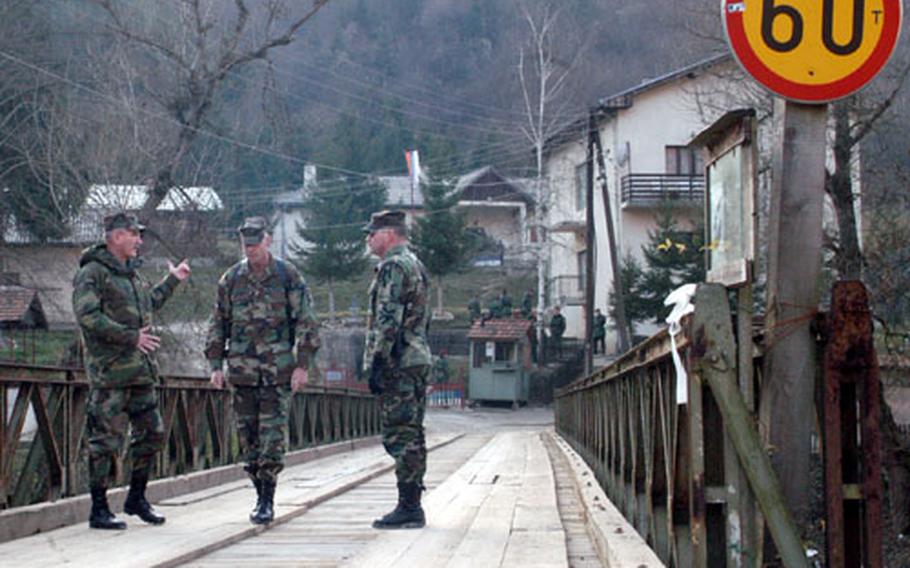 American soldiers inspect the bridge in Kuslat they rebuilt. The local Bosnian Serb military camp is in the background. (Ivana Avramovic / S&S)

KUSLAT, Bosnia and Herzegovina &#8212; Besim Mustafic was concerned that the only bridge connecting his village of Rasevo in northeastern Bosnia to the town where a dozen village children go to school was falling apart.

Mustafic drove the children to and from school every day in his van, about five miles each way. But every day there was a bit less of the bridge to cross. The wooden boards were rotting away.

That was when National Guard soldiers of the 682nd Engineers Battalion and those patrolling the area from the 2nd Battalion, 136th Infantry Regiment stepped in to help.

After doing some advance site preparation, the soldiers rebuilt the bridge in a single day. They worked from morning until after dark, when they used the headlights of the their vehicles to see.

The soldiers picked a weekend to do the work, when children stay at home.

Before peacekeepers came to the rescue, Mustafic, a farmer, was planning to take some money from his limited budget to buy wood from the nearby sawmill and fix the bridge with other villagers.

The construction material would have cost around $12,000 if a civilian contractor did the work, Moszer said. But using scrap and recycled material the U.S. military had on hand made the project much more affordable.

While the small bridge on the dead-end road leading to Rasevo is critical for the villagers, Stabilization Force patrols and the local Bosnian Serb military whose camp is at one end of the bridge, use it, too.

The bridge is not the first project benefiting the local population that the American engineers have taken on since arriving in September.

The troops have also completed a water project in Doboj and helped with road construction in a village near Doboj. They are working on an American library in Tuzla, and will do more bridge and road work before returning home in March.

SFOR troops have gone on many other less-traveled roads and found small bridges in poor shape.

Mustafic, the community leader for Rasevo village, kept thanking the soldiers for their help during a small ceremony on Friday.

He and U.S. troops cut a ribbon and had the schoolchildren walk across the bridge first.

He did show some disappointment that the local military did not take charge of the repairs.

&#8220;They (local military) have a passive relationship compared to that of the stabilization force, which is absurd in my opinion,&#8221; Mustafic said.

&#8220;It surprises me as a person, considering that we are citizens of the same country. We receive greater support from the people who come from across the ocean.&#8221;