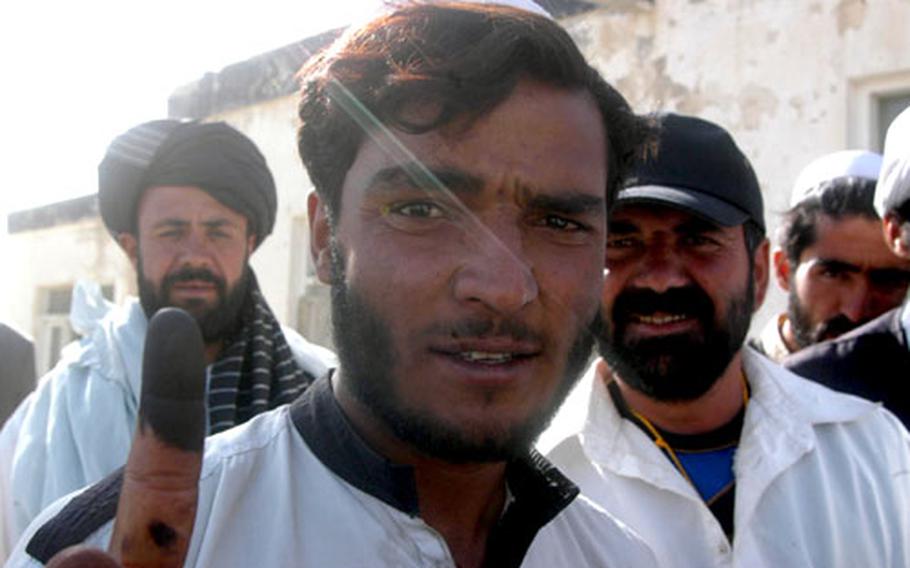 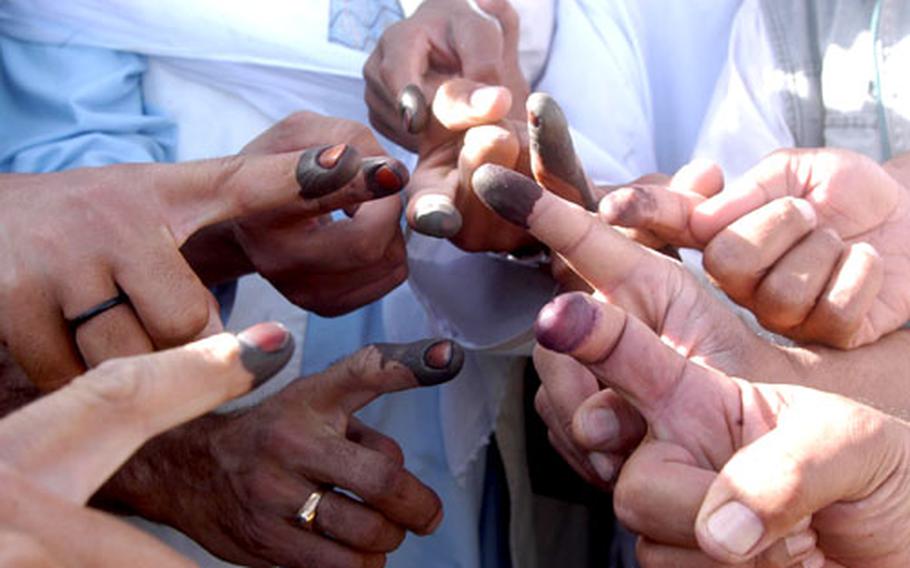 Voters in Afghanistan display their discolored digits Sunday at a polling station in Sharana, signifying they had voted in the country’s first parliamentary election. (Kent Harris / S&S) 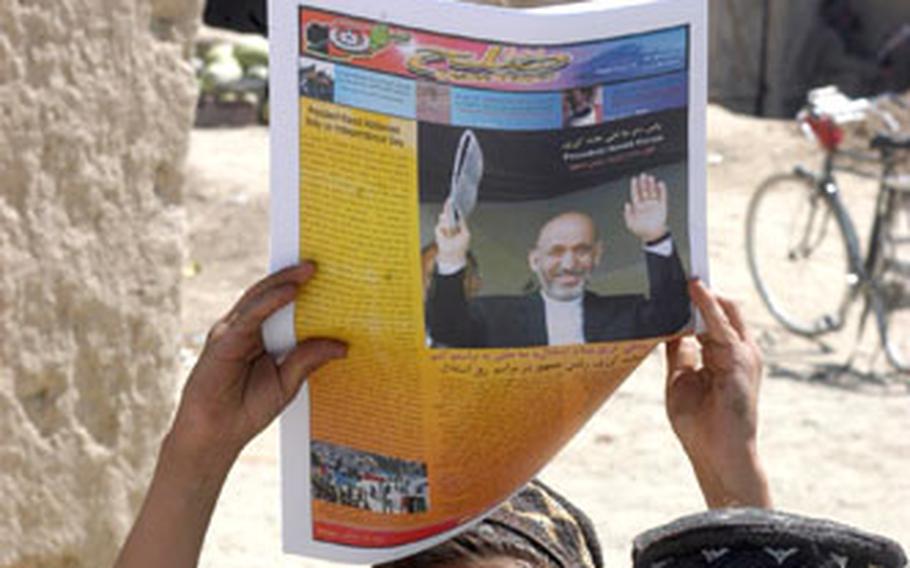 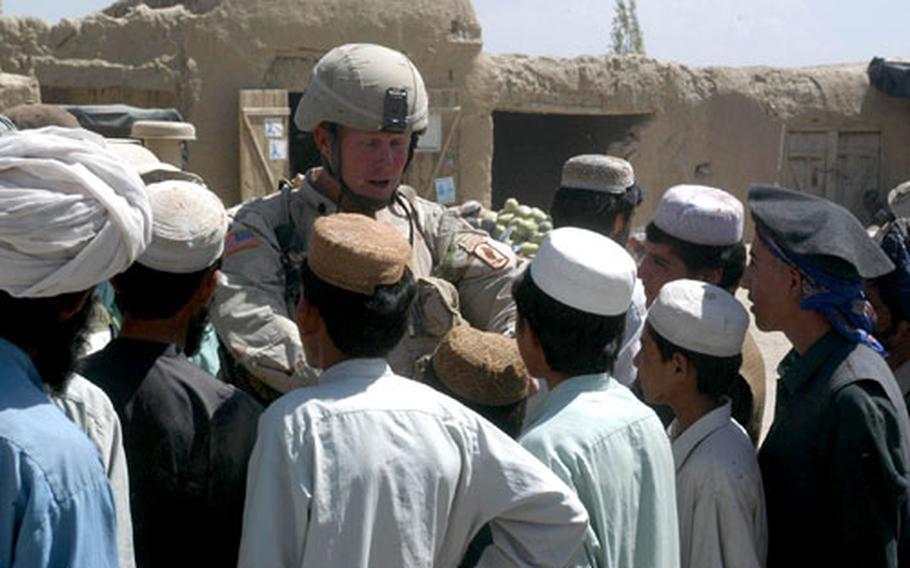 Lt. Col. Tim McGuire, commander of the 1st Battalion, 508th Infantry Regiment, speaks to a group of kids Saturday during a visit to one of a series of villages in Paktika province in Afghanistan, a day before parliamentary elections. (Kent Harris / S&S)

SHARANA, Afghanistan &#8212; Voters turned out to the polls by the thousands in Paktika province Sunday while those hoping to disrupt the country&#8217;s first parliamentary elections stayed away.

Both were victories for the province&#8217;s governor, Gulab Mangal, and the American and Afghan military and police forces that have spent the greater part of the last several months trying to make election day a safe one.

&#8220;I am very happy,&#8221; Mangal said through a translator during a brief interview in his office. He said the day was important not only because of a lack of violence, but because it also showed that Afghans are willing to participate in a democratic government.

It was the country&#8217;s second election in less than a year. Hamid Karzai was chosen as president last fall. Mangal said Karzai called him Sunday and the two agreed that the elections in Paktika appeared to be a success.

Lt. Col. Tim McGuire, the senior American commander in the province, didn&#8217;t argue with that assessment. He said there was only one report of violence before the polls closed at 4 p.m. local time. That was in the south part of the province when two Afghans were killed by an improvised explosive device. The initial report of the incident indicates the two were the ones setting the device.

That&#8217;s not say there weren&#8217;t problems. Mangal said he had heard reports of those running individual polling stations showing favoritism to some candidates. And there were some reports of efforts to intimidate voters to either stay away from the polls or vote for certain candidates.

But thousands of Afghan citizens sported ink-stained fingers, signifying they had cast their votes. McGuire, commander of the Vicenza, Italy-based 1st Battalion, 508th Infantry Regiment, said Paktika had the highest number of new voter registrations in the country and the second most polling stations.

A few voters at one of those stations in Sharana said they didn&#8217;t have any problems voting. Hassan Gul, a member of the police force, helped provide security, then voted himself late in the day. He proudly displayed a finger darkened with ink outside the polling station. Those running the station said that no one who wasn&#8217;t voting was allowed inside to take pictures or interview those voting. But they had no problems with pictures and questions just outside.

Benoor Bawary, a teacher and a part-time student, said he had confidence in the two candidates he voted for. One was for a provincial council of nine people. Ninety-eight people were running in the province. Another vote was for the national parliament. Sixty-two candidates were vying for Paktika&#8217;s four representatives.

Afghan police provided protection at the polling sites, with Afghan army forces on the perimeter. American troops conducted presence patrols throughout the province but stayed away from the polling places.

&#8220;Basically, [we] just back them up if anything gets really bad,&#8221; said Sgt. Travis Robinson of the 212th Military Police Company from Kitzingen, Germany.

1st Lt. John Chiappone and the rest of the company&#8217;s 1st Platoon was accompanied by a jeep full of Afghan police on their sweeps around the city. He said Afghan police also conducted their own patrols and maintained a vigil at the area&#8217;s 12 voting stations all night before the elections.

McGuire and his soldiers have been tirelessly promoting the election for months.

The message was a pretty simple one: Take a stake in your government by voting.

The Red Devils, as the 508th is known, carried out a series of offensives against anti-government forces this summer in coordination with Afghan army and police. One of the goals was to kill or capture those who might try to disrupt elections.

Capt. Josh SeGraves, commander of the Red Devils&#8217; Headquarters and Headquarters Company, wanted a last look Saturday evening at the village of Seghanah. There was actually only one candidate running in the village, but voters could select from anyone across the province.

SeGraves was assured by Eid Mohammed, an Afghan hired by the U.N. to supervise the vote in the district, that everything they&#8217;ve discussed previously has been done. Mohammed also volunteered that some of the candidates in the province have made campaign promises they likely won&#8217;t be able to keep. Told that maybe Afghan politicians aren&#8217;t all that different from their American counterparts, he laughed.

SeGraves was smiling as well.

&#8220;Pretty enthusiastic&#8221; didn&#8217;t come close to describing McGuire and his strong feelings about the elections. At 6 feet 3 inches, he towers over just about every Afghan he meets. He needs an interpreter to communicate with the crowds he attracts, but not a microphone.

McGuire said his battalion has fought and killed many anti-government forces in country since arriving late last winter. But getting the people to buy into democracy and take part in government is more important in the long run.