U.S. troops out to reshape attitudes in Iraq military 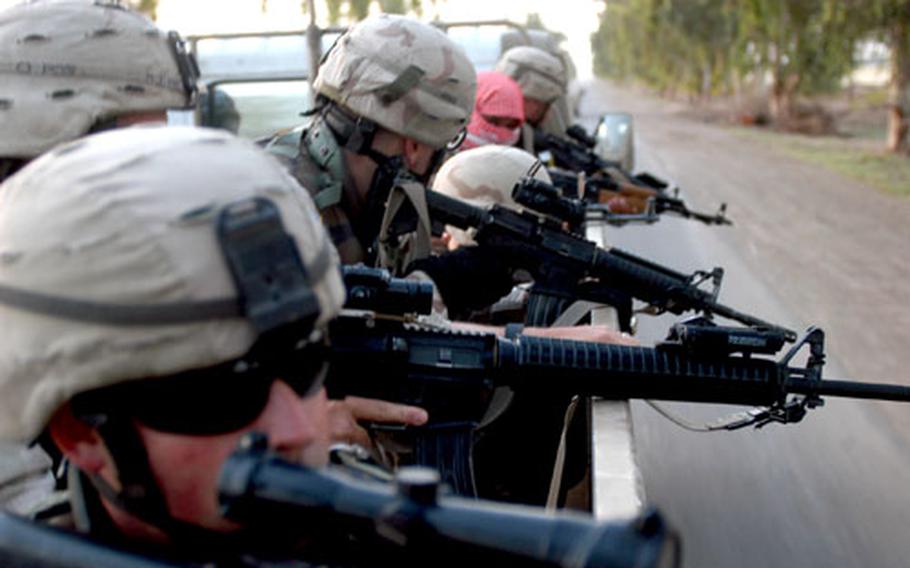 Iraqi soldiers are instructed by U.S. forces as they drive near Hawijah, Iraq. (Kevin Dougherty / S&S)

Iraqi soldiers are instructed by U.S. forces as they drive near Hawijah, Iraq. (Kevin Dougherty / S&S) 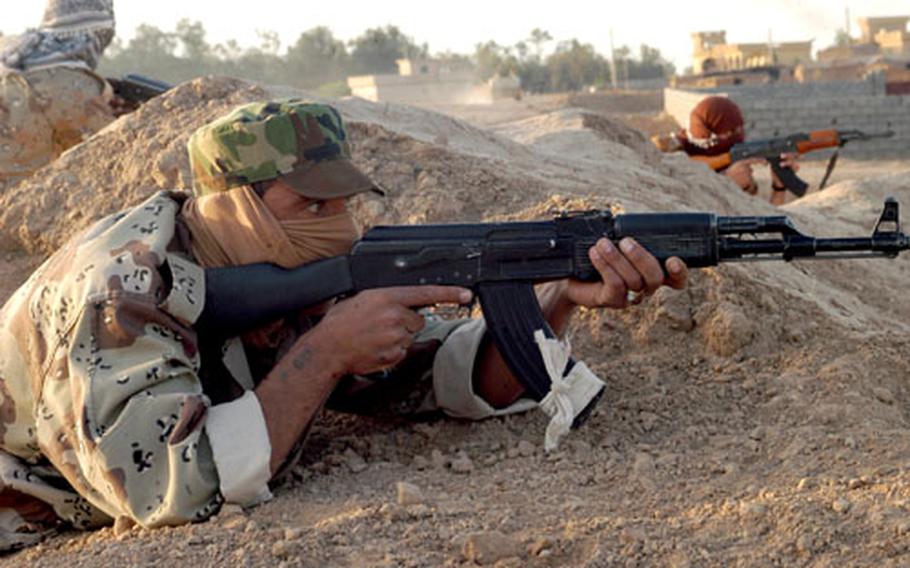 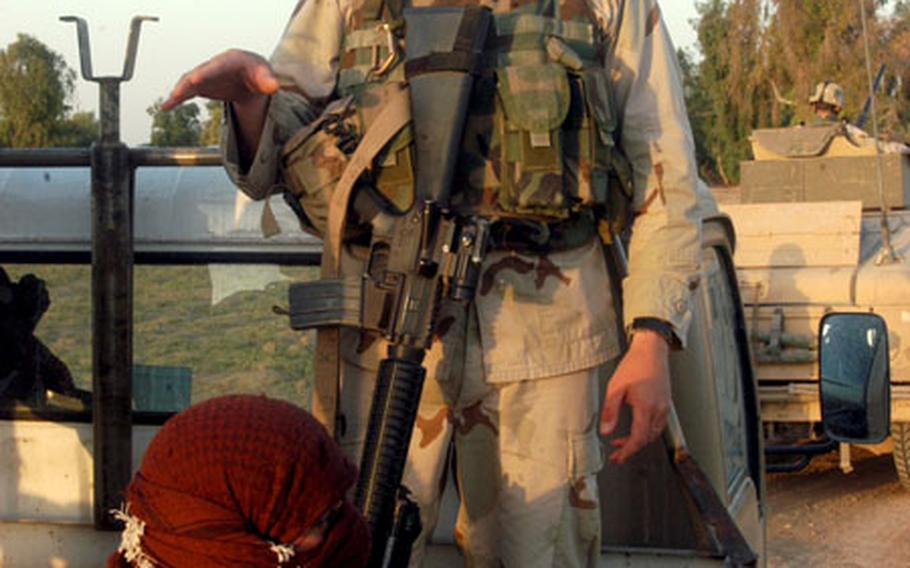 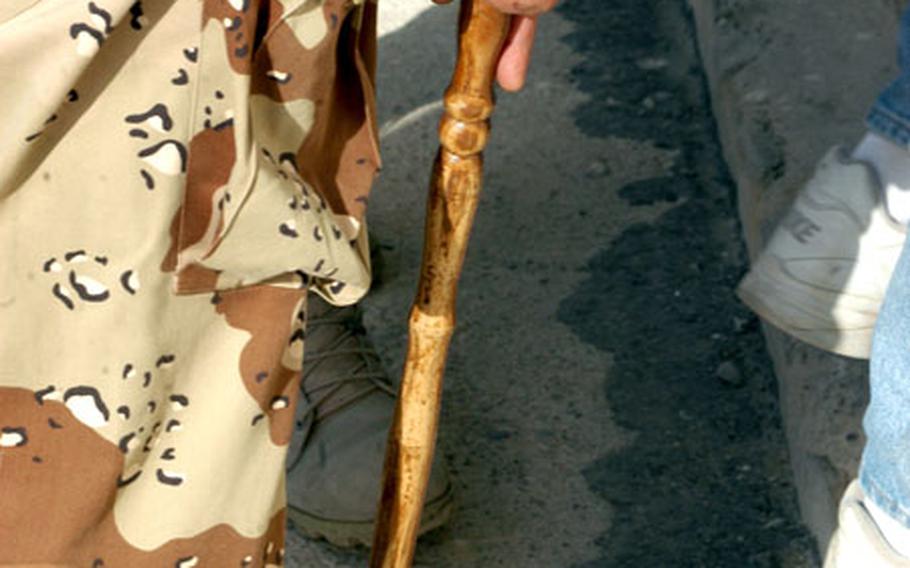 At an army training facility in Kirkuk, Iraqi camp leaders have been known to use a short, wooden stick to whack uncooperative or inattentive students. It’s also a status symbol. (Kevin Dougherty / S&S)

HAWIJAH, Iraq &#8212; A field training exercise involving U.S. Army instructors and Iraqi soldiers is wrapping up, and Capt. Mark Sauvageau needs a ride back to the base for a debriefing.

Sauvageau, a company commander with the 1st Battalion, 163rd Infantry Regiment, jumps onto the back of an open-air, flatbed truck carrying several Iraqi soldiers. He sits down and leans against a sidewall. As the truck lurches forward, an Iraqi translator softly says to the person next to him: &#8220;In the old Iraqi army, the officer would never get in the back of a truck with his men.&#8221;

The Montana National Guardsman hears the conversation and smiles.

For well over a year, the U.S. military has been driving Iraqi soldiers and policemen down a road of reform to a point where Iraqi security forces, from police desk sergeants to border guards, can perform their jobs well enough for Sauvageau and other soldiers to take the road home.

&#8220;This is your country,&#8221; Sgt. 1st Class Kevin Kincheloe of the Montana Guard told his students at a training course for Iraqi police.

In the past few months, more military and police training teams have fanned out across Iraq to mentor the indigenous forces that will someday assume total responsibility.

The task on both ends of the classroom is daunting.

All members of Iraq&#8217;s security forces know they are marked men. Hundreds have died at the hands of insurgents, mostly as a result of suicide bombings.

Some Iraqis go to extraordinary lengths to hide their affiliation with the security force. Many, for example, wear masks or head scarves when they go out on missions. One Sunni Arab serving near Hawijah said he changes into civilian clothes when he travels to and from work.

In addition to the danger, there&#8217;s just a lot to learn, from map orientation and proper uniform wear to shooting straight and taking initiative.

The last has proved to be an especially hard concept to master, mainly because of a decades-long culture of control and corporal punishment that sucked all the initiative out of Iraqi subordinates.

One of the habits that must be curbed, U.S. trainers say, is the inclination to use corporal punishment to maintain order and discipline. At a training camp in Kirkuk, for example, Iraqi officers will sometimes smack recruits with a short, lacquered wooden cane.

Another obstacle U.S. troops are trying to work through is the Iraqis&#8217; lack of marksmanship.

Staff Sgt. Stanley Van Doren, an instructor in Hawijah, said some Iraqis believed Allah willed bullets to their mark. He referred to their shooting tactics as &#8220;spray and pray.&#8221;

The full breadth of the endeavor is staggering when you consider U.S. soldiers are tutoring the Iraqis in an array of areas, from administrative, support and intelligence to civil affairs, tactical operations and air flight.

&#8220;We must be close to the citizens, because they will help our progress forward,&#8221; said Iraqi Sgt. Nory Thaher.

Last year, in places such as Najaf, Samara, Beiji and Mosul, unrest led some Iraqi security forces to simply quit. Several police departments and army units essentially had to be re-created from scratch.

Since late last year, those instances have largely stopped. Maj. Richard Goldenberg, chief of public affairs for the 42nd Infantry Division, said he knows of no report in the past six months of a mass exodus of security forces from a particular unit or city.

U.S. officers from Baghdad to Tikrit talk about the need to work themselves out of a job. That&#8217;s why soldiers like Sauvageau, 1st Sgt. Garth Flint and Sgt. Ron Trowbridge in Hawijah spend hours drilling Iraqi troops.

The training of Iraqi forces has grown by leaps and bounds. Some troops as recently as last fall were still drilling with toy guns.

The Americans have adjusted the length and scope of the training in the interest of promoting quality over quantity. Again and again, troops say it&#8217;s a process that will get better with time.

Some Iraqi soldiers &#8220;will do what you want while you are there, but once you leave, they do what they want,&#8221; said Army Sgt. 1st Class Rick McGovern, a Pennsylvania National Guardsman with the 1st Battalion, 111th Infantry Regiment in Beiji.

With adequate time and civilian support, there&#8217;s no reason why the mission to train and equip them shouldn&#8217;t succeed.

Annual pay, by rank, for the new Iraqi Army. Ranks and pay are roughly equivalent for Iraqi Police.