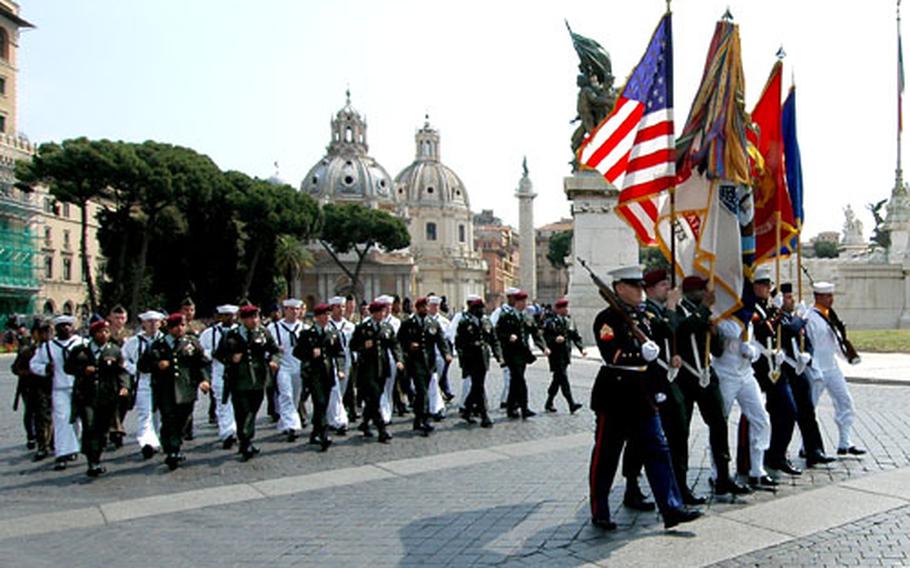 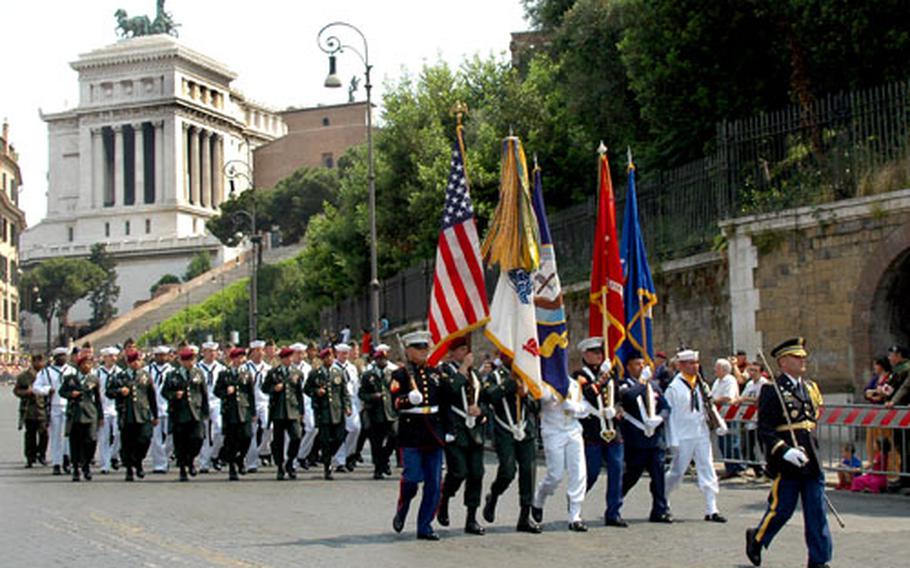 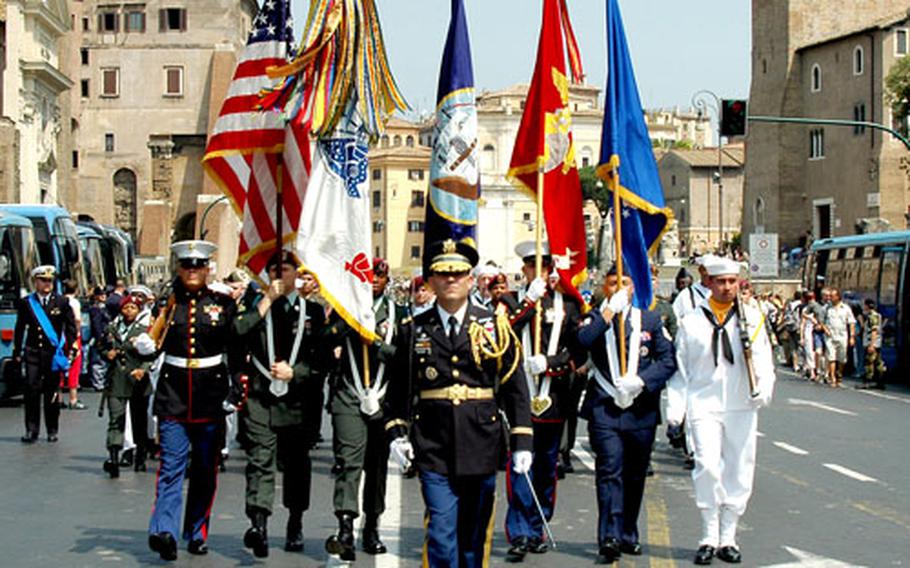 About 50 U.S. military members march through the cobblestone streets of Rome on Thursday during the country’s Republic Day. Col. Elliot Rosner leads the group past the Italian Tomb of the Unknown Soldier. (Ted Banks / U.S. Navy)

ROME &#8212; With more than 8,700 military members from Italy and other nations marching and driving through the city&#8217;s cobblestoned streets Thursday, it was hard for the few dozen U.S. military members to stand out among the crowd.

But rounds of applause from onlookers, salutes from a group of Italian war veterans and &#8212; much to the chagrin of the soldiers, airmen and Marines marching with them &#8212; calls of &#8220;We love sailors&#8221; from a handful of female parade watchers made the massive Italian Republic Day parade seem downright American-friendly.

About four dozen Europe-based U.S. military personnel &#8212; about a dozen from each service &#8212; took part in the parade, which celebrated the country&#8217;s 59th Republic Day, the equivalent of the U.S. Independence Day.

The parade route took the troops past the ancient Roman sites of the Circus Maximus, the Coliseum and finally past the Italian Tomb of the Unknown Soldier.

&#8220;All the different monuments made it difficult to stay focused on the parade,&#8221; said Tech. Sgt. Aldomar Genao of the Aviano, Italy-based 31st Communications Squadron.

Others had a broader take on the American participation.

&#8220;It was a great experience,&#8221; said Marine Sgt. Scott Hill of the Stuttgart, Germany-based Marine Forces Europe after the parade, &#8220;not just because we celebrated Italy&#8217;s independence but because of what [Americans] did to help them achieve that [in World War II].&#8221;

The Italian Republic was founded on June 2, 1946, a little more than a year after the end the war.

A group of Italian war veterans stood at one part of the parade route, rendering honors to the American group and later drawing favorable remarks from a group of sailors and soldiers.

After the ceremony, the military members themselves felt a little liberated.

The parade was the culmination of four days of practice, including one dress rehearsal between 10 p.m. Monday and 5 a.m. Tuesday through the blocked-off parade route, explained Petty Officer 3rd Class Chan Bellamy, a dental technician with Naval Hospital Naples.

Bellamy carried the Navy flag at the head of the U.S. column.

Really good for the sailors, it seemed. Even the soldiers agreed they received special attention from some female parade-goers.

But Didonato received a little extra encouragement. The former 82nd Airborne Division soldier said he heard one cry of &#8220;Go 82nd,&#8221; come from somewhere in the crowd.

And as more and more stories came out, it seemed that Thursday&#8217;s parade through the Eternal City just might be eternally remembered by the participants.