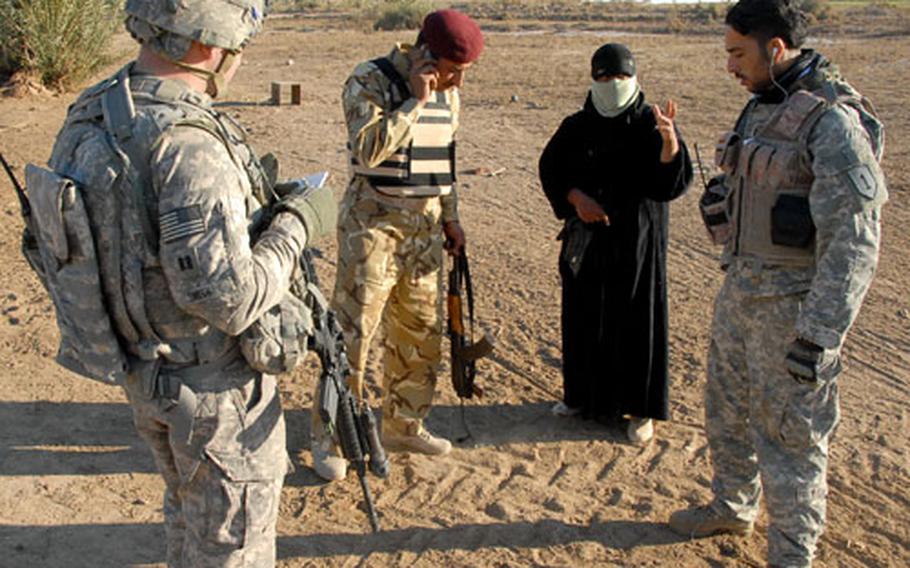 An Iraqi Army officer, along with Capt. Tom Smith and his interpreter, questions a woman during a raid Thursday on a farm that was believed to be harboring an al Qaida operative. The raid produced no captures despite evidence the wanted man had recently been on the property. (Travis J. Tritten / S&S)

An Iraqi Army officer, along with Capt. Tom Smith and his interpreter, questions a woman during a raid Thursday on a farm that was believed to be harboring an al Qaida operative. The raid produced no captures despite evidence the wanted man had recently been on the property. (Travis J. Tritten / S&S) 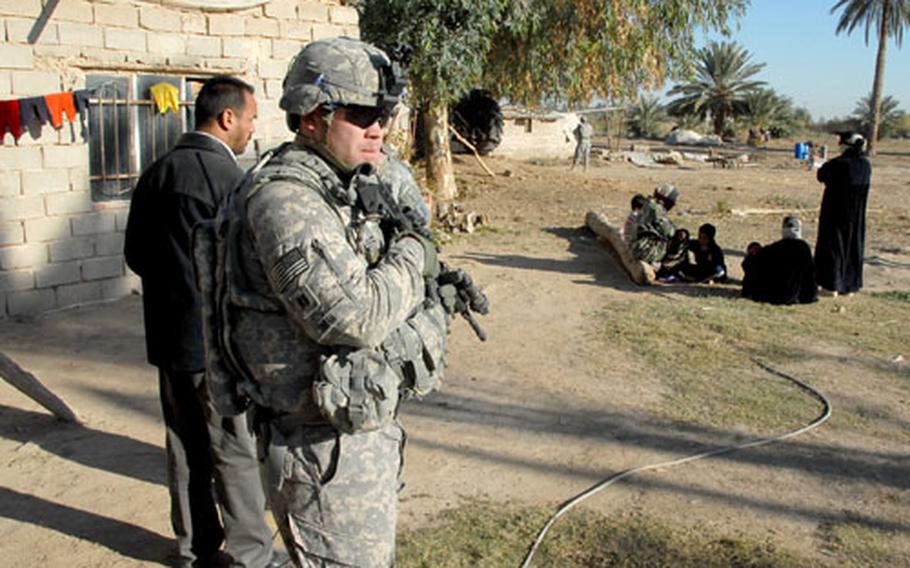 Capt. Tom Smith watches a group of women during a raid in the Mahmudiyah countryside Thursday. Intelligence reports said a wanted Al Qaeda operative and his bodyguards were staying at the farm but the women said only students and farmers had been there. (Travis J. Tritten / S&S) 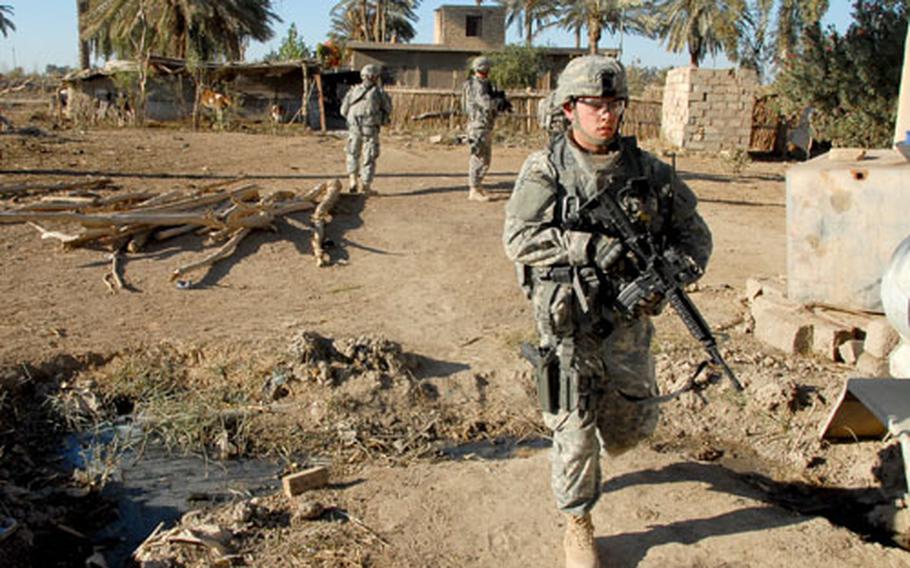 Second Lt. Kevin Mussman searches a farm where an al- Qaida operative was thought to be hiding Thursday. The wanted man is known for wearing a suicide vest and dressing like a woman to escape capture. (Travis J. Tritten / S&S) 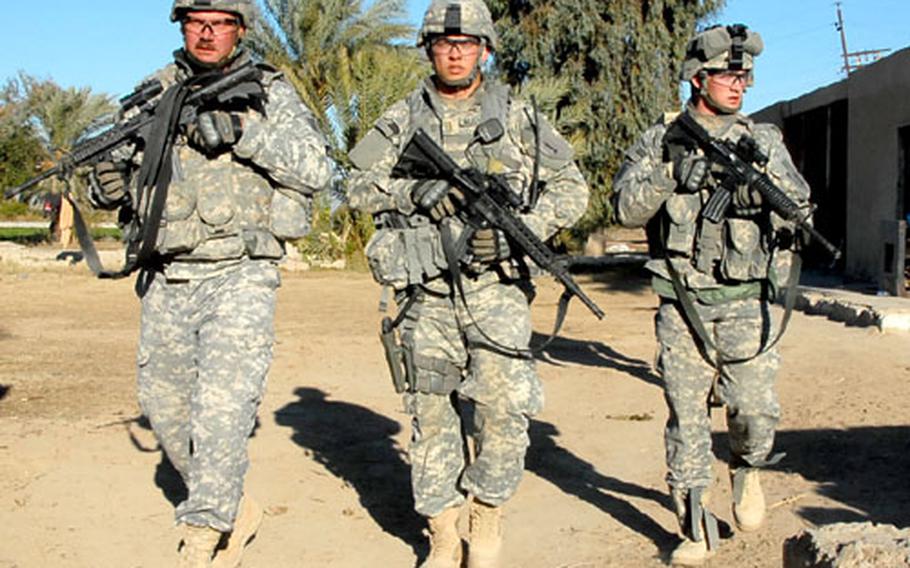 MAHMUDIYAH, Iraq &#8212; The only traces of the al-Qaida suspect and his bodyguards were sandals and a plate of partially eaten rice.

It was evidence that Iraqi and U.S. soldiers might have just missed the fleeing jihadi, one of the most wanted in Mahmudiyah.

The Iraqis and a platoon from 1st Battalion, 63rd Armored Regiment, 1st Armored Division, pulled up in a cloud of dust at midday Thursday and rushed the cluster of ramshackle farm buildings with guns raised.

But they found no men. The al-Qaida target had slipped through the net again, disappearing into the expanse of fields, canals and vegetation that make up this rural region.

Only a group of women, wrapped in scarves and robes, were at the farm. They said the absent male residents were farmers and students.

&#8220;They are lying,&#8221; said Capt. Tom Smith, the battalion&#8217;s Delta Company commander, who questioned the women after a search of the farm turned up nothing.

Militant groups and al-Qaida in Iraq still pose a security threat to the area, but have been isolated and put on the run by the &#8220;Sons of Iraq,&#8221; the Iraqi army and 1st Battalion, which oversees Mahmudiyah city and the surrounding area.

The Mahmudiyah district, which lines the highway south of the Rashid area of Baghdad, has seen a dramatic decrease in violence in the past eight months as the Iraqi authorities become more competent and the &#8220;Sons of Iraq&#8221; help to keep the peace, according to Dragon Battalion.

The most wanted fugitives in the area are aligned with al-Qaida, Jaish al-Mahdi and its splinter groups, and Badr Corps, alleged militia with ties to the Supreme Iraqi Islamic Council, the largest party in the Iraqi parliament, which has often been accused of dominating the Iraqi security forces.

The al-Qaida suspect targeted Thursday, who is No. 5 on the Mahmudiyah most-wanted list, has been close to capture several times in the past two months and is now confined to a small swath of territory where locals are willing to provide cover, Smith said. The U.S. Army declined to release the fugitive&#8217;s name.

Still, tracking and catching wanted men can be a challenge in Mahmudiyah, especially outside the city where maze-like dirt roads crisscross the landscape and word of a military presence can be passed quickly through the use of cell phones.

On Thursday, the intelligence on the target came quickly and Smith and 2nd Lt. Kevin Mussman, a Delta Company platoon leader, met with Maj. Dhamad Sheill Manhie of the Iraqi army to form a raid plan.

Two Iraqi army Humvees led the way across the dusty countryside and the armored vehicles navigated around canals and levees.

An advisement came across the radio as the soldiers moved toward the farmhouse: The target was known to wear a suicide vest with a detonator at the back of the neck, which would allow him to activate the vest while appearing to surrender.

Also, the soldiers were told he was with three bodyguards who were in the farmhouse and likely to be armed.

In the No. 2 Humvee of the Delta Company platoon, Staff Sgt. Chad Kramer warned his soldiers. The kill radius of a suicide vest could be large and his men were to fire on the al-Qaida target if he reached for the back of his neck.

Keeping a safe stand-off distance and using the element of surprise would be key to a capture, said Kramer, 38, of Gresham, Neb.

The Iraqis and the soldiers raided the house and searched the grounds but turned up nothing. The platoon stomped on tiled floors for hidden doors, lifted stacks of blankets and crawled along roofs.

Apache helicopters circled the farm and a UAV buzzed high overhead. There were no reports of anyone leaving the farm before the raid.

Smith said the remaining militants in the area use a variety of methods to elude the Iraqi army and coalition force &#8212; wearing woman&#8217;s clothing and using getaway vehicles and suicide vests.

But authorities remain close behind and insurgent attacks have dried up in Mahmudiyah.