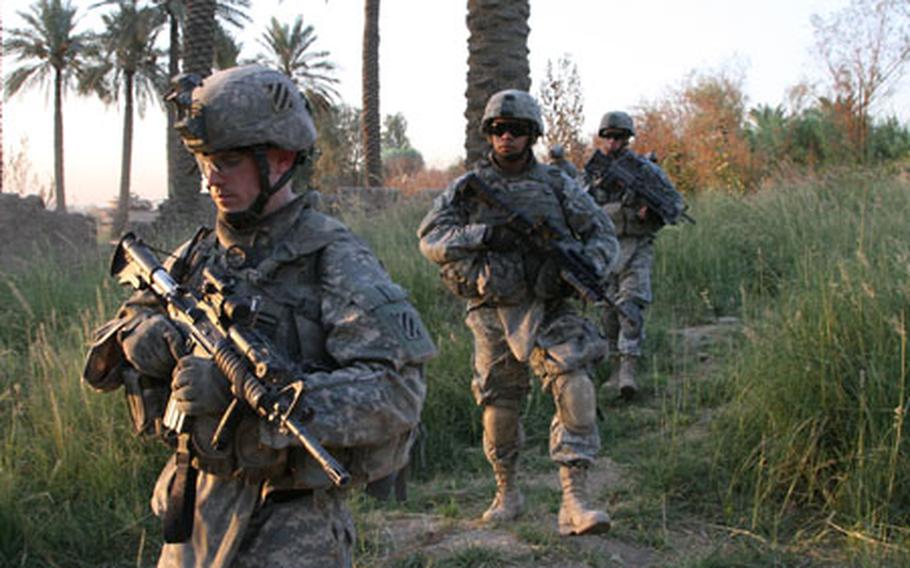 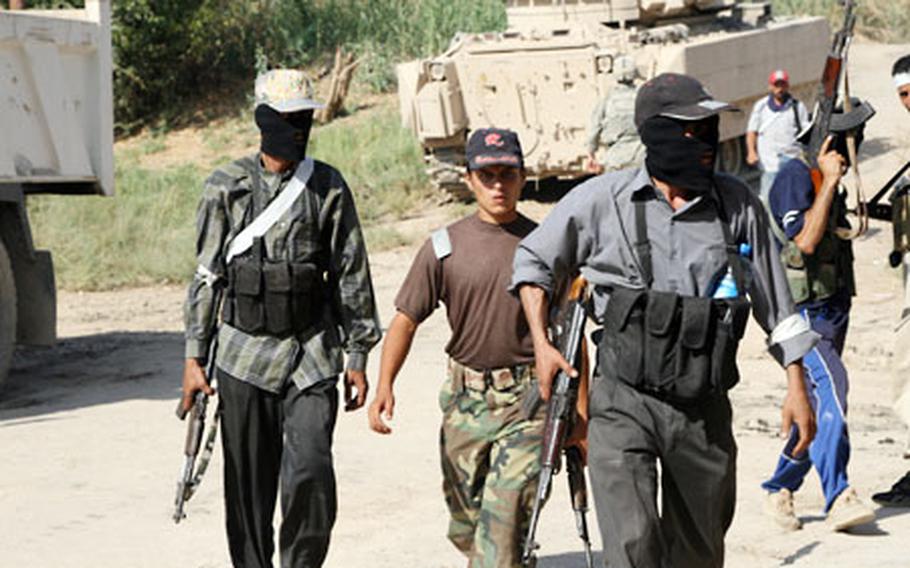 A group of "concerned local citizens" accompany U.S. troops from 3rd Squadron, 1st Cavalry Regiment, based at Fort Benning, Ga., during Operation Tuwaitha Sunrise earlier this week. The operation was aimed at clearing al-Qaida insurgents from Tuwaitha, about nine miles southeast of Baghdad, and returning the village to local control. (Drew Brown / S&S) 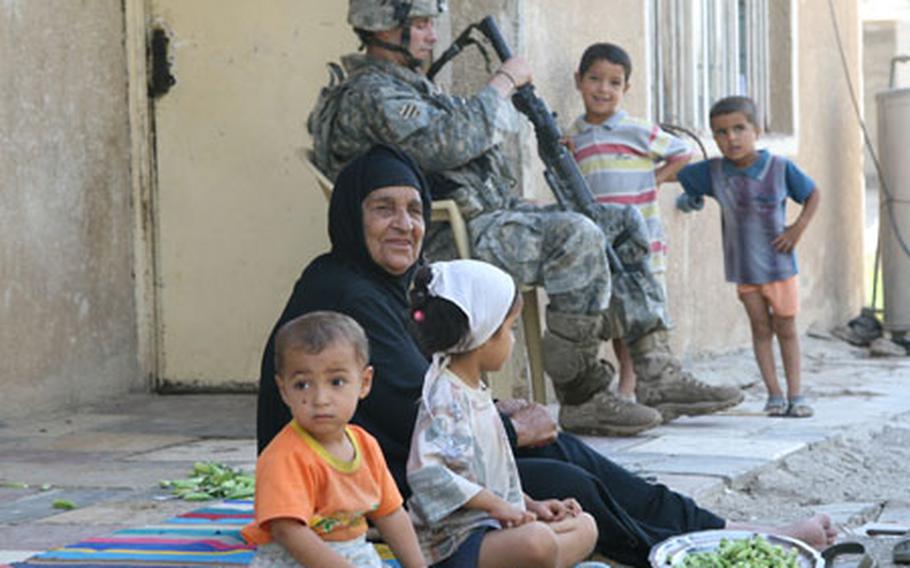 Pfc. Darrell Deshotel, 23, from Oakdale, La. pulls security as other troops take a break during Operation Tuwaitha Sunrise earlier this week. A group of "concerned local citizens" accompanied U.S. forces as they cleared insurgents from the village of Tuwaitha southeast of Baghdad, seeking to return control to the local residents. Deshotel is with the 1st Battalion, 15th Infantry Regiment, based at Fort Benning, Ga. (Drew Brown / S&S)

TUWAITHA, Iraq &#8212; U.S. forces wrapped up a two-day operation Thursday with a group of local Iraqis to clear al-Qaida insurgents from this village, located on the Tigris River about 15 kilometers southeast of Baghdad.

This was the second time since July that U.S. troops have gone in to clear insurgents from Tuwaitha, an al-Qaida stronghold for several years.

But unlike the previous mission, in which U.S. forces received almost no cooperation from villagers, this latest operation was launched at the request of local government officials and tribal leaders, Kolasheski said.

&#8220;We think that the al-Qaida threat has formed a common enemy here among the Sunnis and the Shias,&#8221; said Kolasheski, 40, of Loudon County, Tenn. &#8220;The city council, the National Police, the (district) council and tribal leaders have all come to us asking for help.&#8221;

Kolasheski described Tuwaitha as a &#8220;fault line&#8221; between the majority Shiite, which make up 70 percent of the population in his sector, and Sunnis, who make up 30 percent. The village is almost exclusively Sunni, and with Shiites dominating the local government and police, al-Qaida had previously found a ready safe haven in the area for years.

But Kolasheski said the fact that local Sunni leaders had also backed the operation illustrated how al-Qaida had lost significant support in the region. &#8220;People are just tired of the violence,&#8221; he said.

The operation began Wednesday as about 80 U.S. troops, backed by tanks and armored vehicles, met with about 75 members of a recently formed group of &#8220;concerned local citizens&#8221; on the outskirts of Tuwaitha.

The Iraqis, some of them armed and wearing masks to hide their identity, fanned out along a dirt road running parallel to the Tigris, while U.S. mine-clearing vehicles, tanks and personnel carriers followed behind. The group was supposed to point out known al-Qaida houses and suspected bomb sites, but with so many of them unarmed, the event resembled more of leisurely weekend stroll than a military operation.

Other U.S. troops flanked out on foot through nearby farms, moving through date palm groves, fields and fruit orchards, screening the column on the road from possible attack. Many local villagers stood in front of their houses, waving at U.S. troops as they passed.

U.S. engineers set up a series of barricaded checkpoints for the Iraqis to occupy along the road after the operation ended.

U.S. soldiers and Iraqis took a break and a local family served up steaming glasses of hot sweet tea and plates of flat bread and stewed tomatoes.

The column began to move again. Within 10 minutes, the Iraqis reported that a sniper was on the roof of a building down the road and it maneuvered to the safety of a nearby house. A Bradley opened up on the enemy structure with a long burst of 7.62 mm machine gun fire.

The Iraqis reported that the house was the last safe spot before al-Qaida-occupied territory began. They said the location was fired upon almost daily. An unexploded insurgent mortar round was lodged in the roof.

One man displayed a gunshot wound in his shoulder, which he said he had received from an al-Qaida sniper. Another claimed that insurgents fired at them with U.S.-made weapons.

U.S. forces decided to continue in the morning. Speaking to the Iraqi commander, Sgt. 1st Class Donal Mathena, 32, of Hinesville, Ga., urged them to be patient.

But Thursday, U.S. forces decided to pull back to their base at Combat Outpost Cashe. Kolasheski said the top sheik in Tuwaitha had informed him that he didn&#8217;t have enough men to push any further and still hold the terrain, and that he did not know where explosives were located further down the road. The Iraqis had already pointed out the location of two bombs, both of which were disposed of without incident.

Still, Kolasheski described the operation as a success. U.S. forces had pushed four kilometers further along the road than they had during the operation in July, without explosions or casualties. In July, his troops had suffered five bomb blasts and one soldier killed in action, he said.

Kolasheski said the next step would be to continue fostering cooperation between tribal leaders and the local government and to start public works and economics projects.