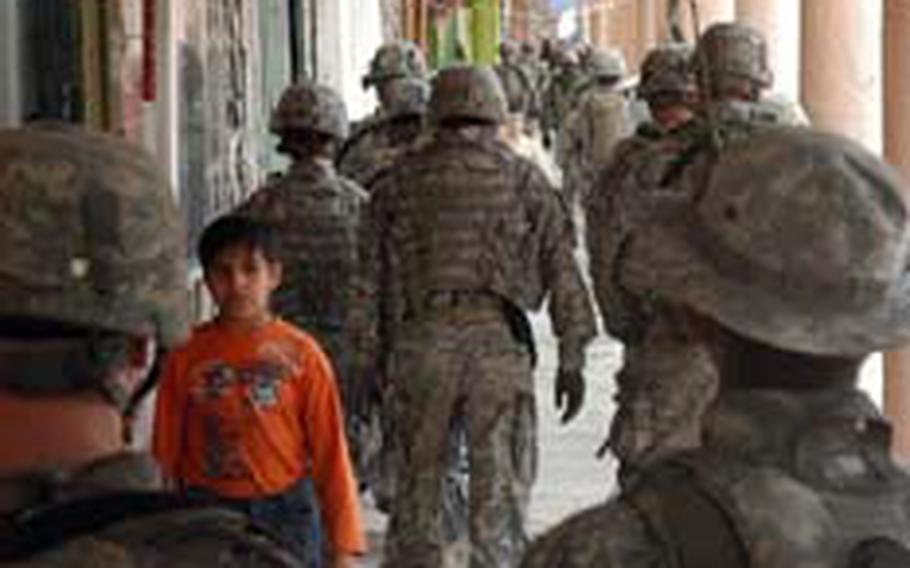 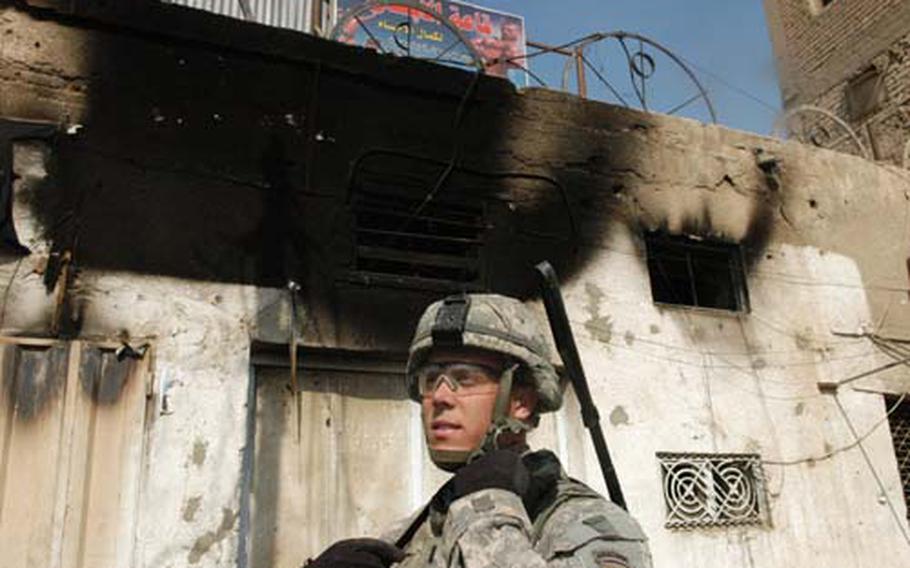 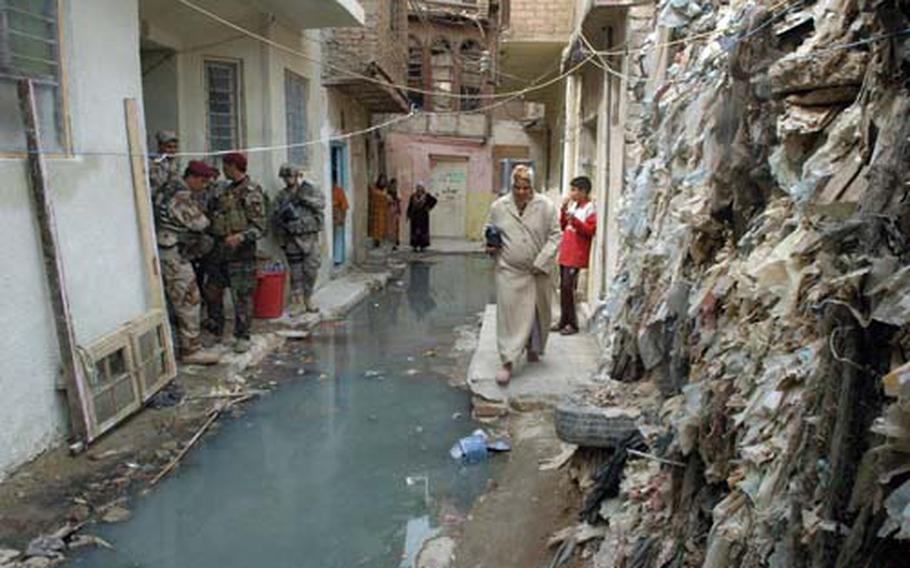 The labyrinthine “mahallas” of Baghdad’s al-Fadhil neighborhood comprise an intricate maze for U.S. and Iraqi forces who were out searching homes for weapons caches. U.S. soldiers here say fighters used the winding alleyways and rooftop networks to engage U.S. and Iraqi forces during a firefight on March 28. (Geoff Ziezulewicz / S&S) 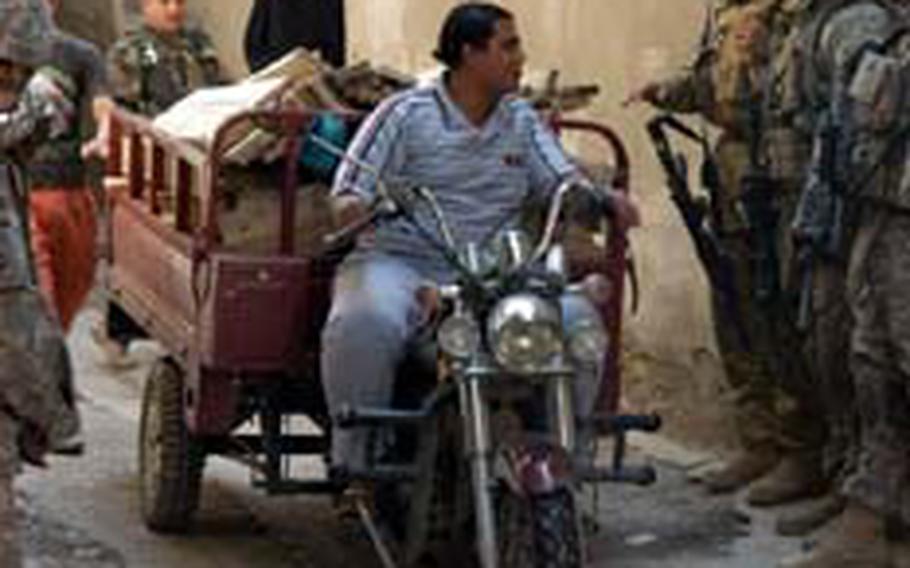 U.S. and Iraqi troops chat with a man rolling through the labyrinthine of passageways known as “mahallas” in Baghdad’s al-Fadhil neighborhood. (Geoff Ziezulewicz / S&S) 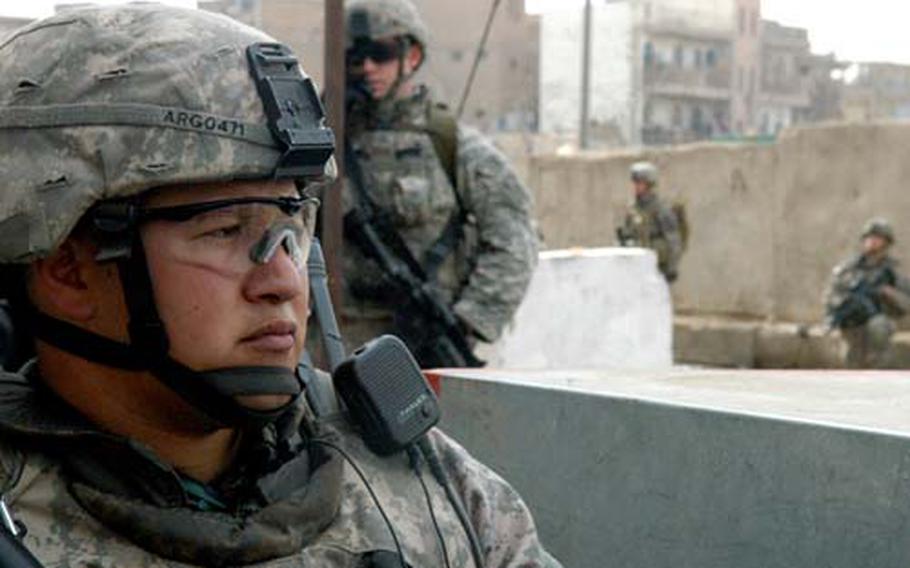 Before the arrest of Adil al-Mashhadani on terrorism and extortion charges, he led a Fadhil chapter of "Sons of Iraq," neighborhood watch groups credited with much of the security improvements across Iraq since 2007.

Al-Mashhadani&#8217;s arrest is the Iraq government&#8217;s first stab at establishing its authority here. Fadhil had no regular Iraqi army or police presence before late March.

While Iraqi soldiers began patrolling the area after the U.S.-Iraq Security Agreement went into effect Jan. 1, most security matters were joint ventures involving U.S. troops and the "Sons of Iraq."

Lt. Col. David Buckingham, the squadron commander, said he had met with al-Mashhadani numerous times a week since his unit has been on the ground. While U.S. forces created and empowered "Sons of Iraq" groups throughout the country in the name of stability a few years ago, Buckingham said that alliance changed on Jan. 1, and that he told al-Mashhadani as much.

"On the first of January I sat down with Mashhadani, looked him in the eye and said, &#8216;I am here to support the government and the Iraqi army,&#8217; " he said last week.

Intelligence indicated al-Mashhadani&#8217;s part in a variety of crimes in Fadhil, Buckingham said.

"They operated like the local mafia," he said. "Mashhadani was the don."

Iraqi army checkpoints have sprouted up through this impoverished, Sunni neighborhood since al-Mashhadani&#8217;s arrest. U.S. and Iraqi forces continued to clear weapons caches as well.

Most Fadhil "Sons of Iraq" members voluntarily turned in their arms March 29, according to Buckingham. But approximately 50 hard-core members battled U.S. and Iraqi forces for about eight hours after al-Mashhadani&#8217;s arrest, taking seven Iraqi soldiers hostage in the process before freeing them near midnight, according to Capt. Frank Rodriguez, commander of Alpha Troop.

The Iraqi army arrested between 20 and 25 "Sons of Iraq" members after the fighting, Buckingham said.

Rodriguez said sporadic gunfire continued in the area through March 29.

U.S. and Iraqi forces also found anti-tank mines, rocket launchers and other ordnance in some "Sons of Iraq" members&#8217; houses in the past week, weapons beyond the group&#8217;s standard AK-47s.

Fadhil&#8217;s "Sons of Iraq" numbered about 150 local men, but Buckingham said there are also about 100 to 300 loyal al-Mashhadani supporters. Squadron officials say al-Mashhadani&#8217;s senior aides were arrested or fled Fadhil after his arrest.

Al-Mashhadani&#8217;s arrest and the discovery of weapons well beyond a "Sons of Iraq" member&#8217;s daily duties highlight the checkered background of some of the group&#8217;s leaders and members.

U.S. forces initially funded and empowered the neighborhood security groups in 2007. The Iraqi government took over payments to the groups in October. While the members are credited for security gains of the past few years, there is not enough room for all of them to be folded into the government&#8217;s security forces, and the fate of many members remains unclear.

Some members once fought with the insurgency. Buckingham said al-Mashhadani fought U.S. forces in Fallujah before switching sides.

However, "most of the rank and file SOI are generally good guys who are looking for a job and to protect their neighborhood," Buckingham said.

Per the Jan. 1 U.S.-Iraq Security Agreement, Iraqi soldiers led searches for weapons in Fadhil last week, often through its narrow labyrinthine streets known here as "mahallas." The Mashhadani loyalists used the narrow alleys and adjacent rooftops to maneuver during the fighting after his arrest, according to 1st Lt. Mike Russo of Alpha Troop&#8217;s 2nd Platoon.

"Controlling the rooftops is the key to controlling al-Fadhil," he said during a patrol last week. "There&#8217;s a million different twists and turns around here."

U.S. military officials say he was widely despised for his systemic shakedowns of the locals. But some residents said that while security here broke down after the U.S. invasion in 2003, it improved with the creation of the "Sons of Iraq."

"This is the government," a builder who would give only his first name, Ali, said of the Iraqi army presence. "It is better than the groups."

But, he said pointing down his street, the army doesn&#8217;t man as many checkpoints as the "Sons of Iraq" did.

"We need the IA everywhere," he said through a translator.

Russo also said residents seem glad that al-Mashhadani is gone, but unsure about the security hole left without "Sons of Iraq" here.

"People really have no idea what to do," he said.

As of Wednesday, the remaining Fadhil "Sons of Iraq" members were nowhere to be seen. U.S. soldiers say they got to know and recognize them when "Sons of Iraq" was still manning checkpoints.

"I haven&#8217;t even seen them walking inside the mahallas," Russo said. "They have zero presence."