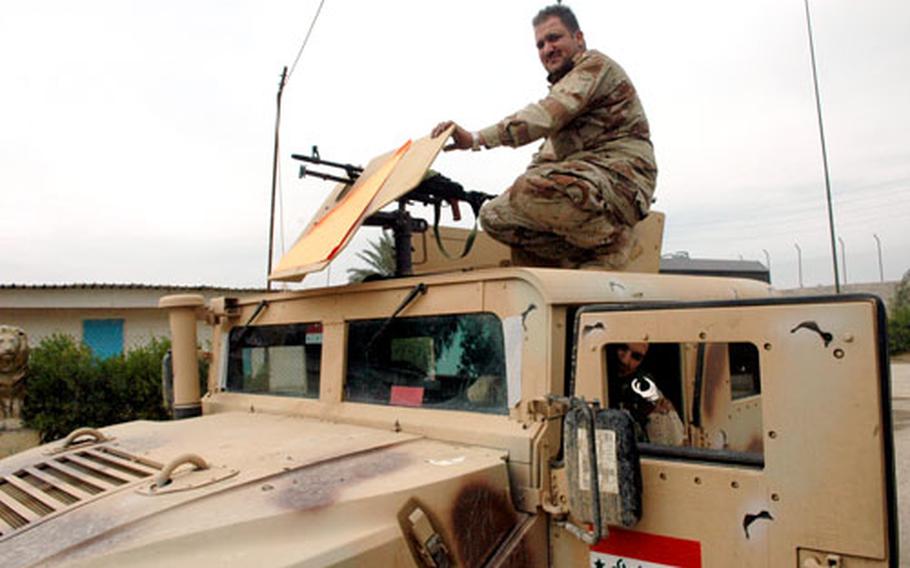 An Iraqi soldier prepares to go on patrol in an armored Humvee, but without body armor. Up to 50 percent of the Iraqi soldiers in the Mahmudiyah-based brigade do not have protective gear. U.S. troops charged with training the Iraqi units have tried to help them get more equipment from the Iraqi Ministry of Defense, but have met with little success. (Andrew Tilghman / S&S)

An Iraqi soldier prepares to go on patrol in an armored Humvee, but without body armor. Up to 50 percent of the Iraqi soldiers in the Mahmudiyah-based brigade do not have protective gear. U.S. troops charged with training the Iraqi units have tried to help them get more equipment from the Iraqi Ministry of Defense, but have met with little success. (Andrew Tilghman / S&S)

&#8220;Hello, anybody manning the checkpoint?&#8221; he said, sarcastically, as he drove a Humvee past several cement barriers and an empty Iraqi army guard post.

Fisher&#8217;s jokes strike a chord of grim reality for U.S. soldiers in this troubled area about 25 miles south of Baghdad, where many American troops have concerns about the Iraqi army&#8217;s competence.

&#8220;Inside town, the (Iraqi) army is pretty ineffective,&#8221; Capt. John Stroh, who works with the military transition team, told his battalion&#8217;s officers at a recent staff meeting. Stroh was referring to the checkpoints the Iraqi army operates.

While some Iraqi army units are stepping up and taking control of parts of Iraq from U.S. forces, independence can seem like a distant goal for other units, like the brigade of roughly 2,500 Iraqi soldiers posted in Mahmudiyah.

The Iraqi army brigade was created in early 2005, later than those in other regions, and significant questions remain about the Iraqi army unit&#8217;s equipment, competence level and trustworthiness, according to U.S. soldiers with the 101st Airborne Division&#8217;s 2nd Brigade Combat Team who work alongside the Iraqi soldiers.

The Iraqi soldiers conduct patrols and operations both alongside U.S. troops and independently.

U.S. troops point to signs of progress, including the Iraqi soldiers&#8217; seizure of an anti-aircraft weapon in Mahmudiyah this week. A team of Iraqi soldiers also quelled a gunbattle that broke out between a local Shiite militia and fighters in a Sunni tribal area.

Yet, by some criteria, the Iraqi brigade lags behind many others across Iraq.

For example, Iraqi soldiers in Mahmudiyah regularly man checkpoints or patrol without body armor and helmets. Up to 50 percent of them have no protective gear, which is standard issue for many other Iraqi units.

&#8220;Out biggest holdup right now is getting the proper equipment,&#8221; said Capt. Brian Tritten, who works with the 2nd BCT&#8217;s military transition team.

&#8220;The terrorist is not only out there planting [bombs]. There are terrorists inside the government and they don&#8217;t want us to have the equipment. It is a new kind of terrorist,&#8221; Mahdi said.

Mahdi and nearly all of his soldiers are Shiites, while the current head of the Ministry of Defense is a Sunni.

U.S. soldiers agree that politics is a factor.

The Iraqi soldiers are brave fighters and show an unwavering aggressiveness in combat despite this lack of equipment, U.S. troops say.

But the Iraqis soldiers also appear to struggle with the more mundane and organizational aspects of running an army unit. The pay roll is a constant concern; several Iraqi soldiers complain they have not been paid in four months.

U.S. soldiers have spent recent weeks working with their counterparts in the Iraqi personnel office, encouraging the Iraqi soldiers to keep track of their soldiers.

&#8220;They have real trouble grasping the idea of accountability,&#8221; said Sgt. Shawn Whitaker.

The Iraqi soldiers have no effective system for tracking casualties or soldiers on leave, Whitaker said.

On one recent afternoon, Whitaker and several other U.S. soldiers were printing identification cards for brigade soldiers, who previously had no standardized way to verify their employment status with the Iraqi army.

And there are other problems. An Iraqi colonel &#8212; who was a Sunni and well-respected by U.S. troops for bringing local Sunnis and Shiites together &#8212; was killed recently, found in a roadside canal with several bullet wounds in his head.

U.S. troops believe that Shiite militias with ties to the local Iraqi army unit or rogue elements in the Iraqi unit itself may have played a role in the colonel&#8217;s death.

Skepticism is an essential tool for dealing with the Iraqis, U.S. soldiers say.

&#8220;We should trust no one,&#8221; said Maj. Fred Wintrich, the battalion&#8217;s executive officer. &#8220;The majority of Iraqi soldiers are honest and committed to the Iraqi security forces&#8217; role in a stable Iraq. But even the Iraqis know they have individual people out there who are not necessarily vested in the legitimacy of the army leadership.&#8221;

Lt. Col. Thomas Kunk, the battalion commander, recently urged his staff to accept the fact that the Iraqi security forces are not completely reliable.

&#8220;The Iraqi army and the Iraqi police pretend like they work together, but they really don&#8217;t,&#8221; Kunk said at a recent staff meeting at Forward Operating Base Mahmudiyah. &#8220;We just have to understand that there are corrupt people in all of the organizations.&#8221;