U.S. troops in Salman Pak find that the most important part of joint force is sharing information 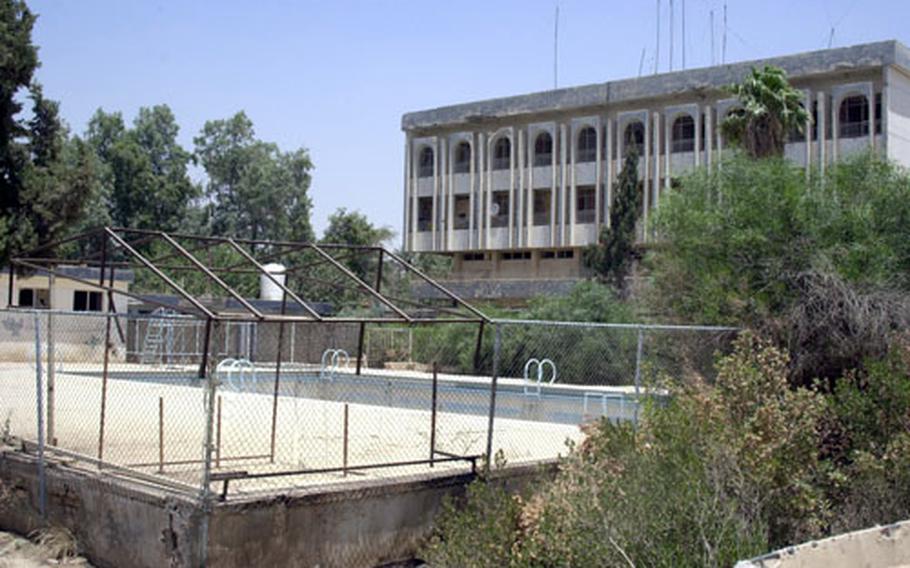 The Iraqi brigade’s headquarters is at the former Salman Pak Hotel. It was once a luxury getaway for Baghdad’s elite. During the early years in the war, the complex was used for beheadings. (Teri Weaver / S&S)

The Iraqi brigade’s headquarters is at the former Salman Pak Hotel. It was once a luxury getaway for Baghdad’s elite. During the early years in the war, the complex was used for beheadings. (Teri Weaver / S&S) Paratroopers with a U.S. battalion have been working through the heat to clean, wire and wall up a new operations center in an Iraqi brigade’s headquarters. Similar operations centers are well established in Baghdad city and other parts of the country. But the 45th Brigade is new to the Iraqi army, and its general and the Americans are still in the beginning stages of their relationship. (Teri Weaver / S&S) 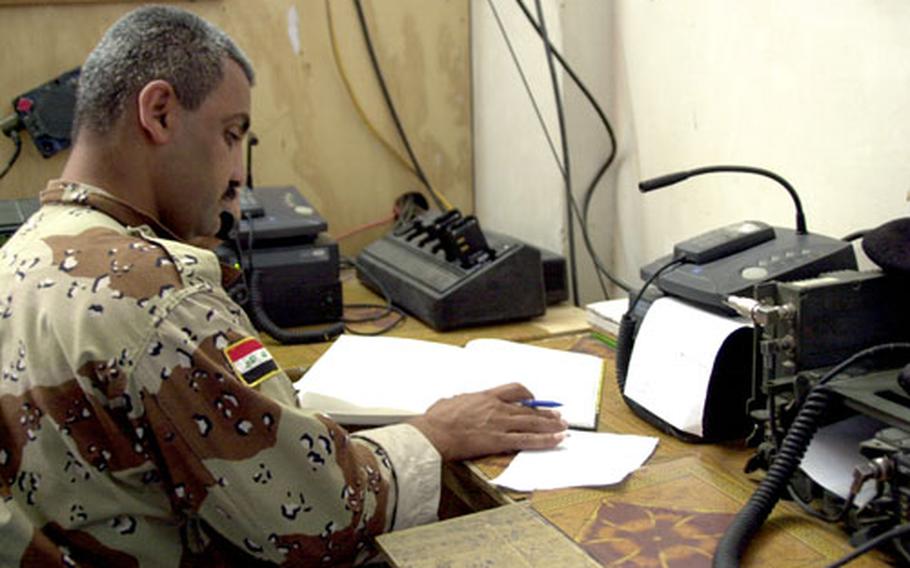 An Iraqi soldier monitors communications for the 45th Brigade, an Iraqi army unit that covers the farmlands southeast of Baghdad. The communications system currently does not link in all of the brigade’s soldiers and hired militia with the U.S. soldiers in the area, members of the 1st Battalion, 505th Parachute Infantry Regiment under the 82nd Airborne Division. The U.S. battalion’s commander is pushing to open a new joint operations center that will allow both sides better access to planning and communications outside the wire. (Teri Weaver / S&S)

The U.S. battalion had moved into Salman Pak only about a month ago, and the short walk from the American outpost to an Iraqi checkpoint was supposed to let the two teams get to know each other, according to the battalion&#8217;s commander.

"It was a very basic patrol," said Lt. Col. Dave Bair, the commander of the paratrooper battalion, which is under the 3rd Brigade Combat Team, 82nd Airborne Division. "A good start."

That start has turned rocky after another Iraqi army unit fired on that night&#8217;s patrol. Five Iraqi soldiers were wounded, one seriously. A U.S. soldier suffered a wrist wound from shrapnel.

To make matters worse, the next weekend, the same scout platoon shot an Iraqi who works for the 45th Brigade during a house raid. The scouts had a warrant for another man. But the man, working with the local "Sons of Iraq" group, attacked a U.S. soldier, wrestled for a rifle and got his finger on the trigger. Another U.S. soldier fired a single round that killed him.

Bair believes his soldiers acted in self-defense in both situations. But he also knows this: The family of the dead man claims the U.S. soldiers danced around his body. And it&#8217;s that story that ended up in the Iraqi army report that went all the way back to Baghdad.

"The backlash is we killed a guy," Bair says.

Bair denies the accusations that his troops celebrated the death. He said the 45th Brigade commander who wrote the report, Brig. Gen. Husseen Musean Massee, admitted later the findings were lies. At a meeting between the two men last week, the general was anything but accusatory.

"It&#8217;s not his fault," the general said in a meeting with Bair late Tuesday night about the fatal shooting. "It&#8217;s an honest mistake."

But the Iraqi general, whom everyone calls by his first name, also insists that Bair failed to do his part by telling him the U.S. side of the story. It&#8217;s a back-and-forth argument that Bair doesn&#8217;t care to have. The report is written. He wants to move on.

Moving on in Salman Pak, in many ways, involves going back to square one.

Bair&#8217;s battalion came to Salman Pak from Dora, an urban section of southeastern Baghdad, where they worked with Iraqi police who had an established communications system linked into the U.S. system.

In Salman Pak, Bair found a newly formed Iraqi brigade that had no combined operations center linked in with the Americans. To get in touch with an Iraqi commander, Bair&#8217;s staff had to use cell phones. Worse, Bair&#8217;s predecessor did not get along with Husseen. The two men could barely stand to talk, Bair said.

Now, Bair is pushing to build a combined operations center and station so the Iraqi and American troops can live, work and plan patrols all from the same building. The center will be at the brigade headquarters in the Salman Pak Hotel, a former luxury getaway for Baghdad&#8217;s elite that also once served as a location for insurgent beheadings in the beginning of the war.

A joint operations center with all the parties plugged in, could have prevented the Iraqi soldiers at the checkpoint from firing on the joint patrol, Bair said.

A day before that patrol, the American lieutenant in charge of the platoon took an interpreter to explain the details to the commander at the Iraqi-controlled building behind the checkpoint. After that conversation everything seemed fine, Bair said.

The night of the patrol, Bair heard shots from his office. The Iraqi soldiers at the checkpoint fired on his scout platoon, even though they had Iraqi soldiers with them.

In the hours after, both sides would learn their mistakes. The U.S. lieutenant had not taken an Iraqi officer along with him in planning the patrol. If so, he might have understood that the Iraqis guarding the checkpoint were not linked &#8212; by command or by radio &#8212; to the commander inside the building.

The mistakes in the house raid are harder to resolve.

Under current policy, the U.S. must not conduct patrols or execute warrants without Iraqis by their side. To that end, the scout platoon rounded up a group of Iraqi soldiers they&#8217;d never worked with to go out and get a named target, Bair said. The Americans met the quota with no idea of the skill level of the Iraqis with them.

The scouts decided to break down the door and go in first. They asked the Iraqi soldiers to stand guard outside.

Bair said he doesn&#8217;t fault his soldiers for that decision. But he wants to rectify it. He wants Husseen to create a specialized platoon that can work with the scouts on raids so that they can be the first guys through those doors.

Husseen has wants of his own. He wants each patrol to have equal numbers of Americans and Iraqis. Bair has agreed.

Despite the hard days, the two men continue to plan together. Bair has promised to help Husseen secure area schools during upcoming exams. Iraqi soldiers will post at each school, with Americans on standby, out of sight, just in case.

Last week, Bair asked about another change that is coming. Soon, Bair told the general, the U.S. troops will not be able to interrogate locals without a trained Iraqi interrogator present. The Iraqi Army division above the 45th Brigade has only seven interrogators to cover a swath of land that fans out from the southeastern corner of Baghdad.

Bair also had concerns about the general&#8217;s plans last week for a raid in Salman Pak. The 45th Brigade was to knock on every door in town to look for wanted men on their list. They had warrants, but some with dates that were years old. Bair thought the full-scale assault would end up making the town angry without garnering any meaningful arrests.

"But we received orders," he said. The general planned to follow his own chain of command.