U.S. troops in Europe banned from wearing uniforms off base 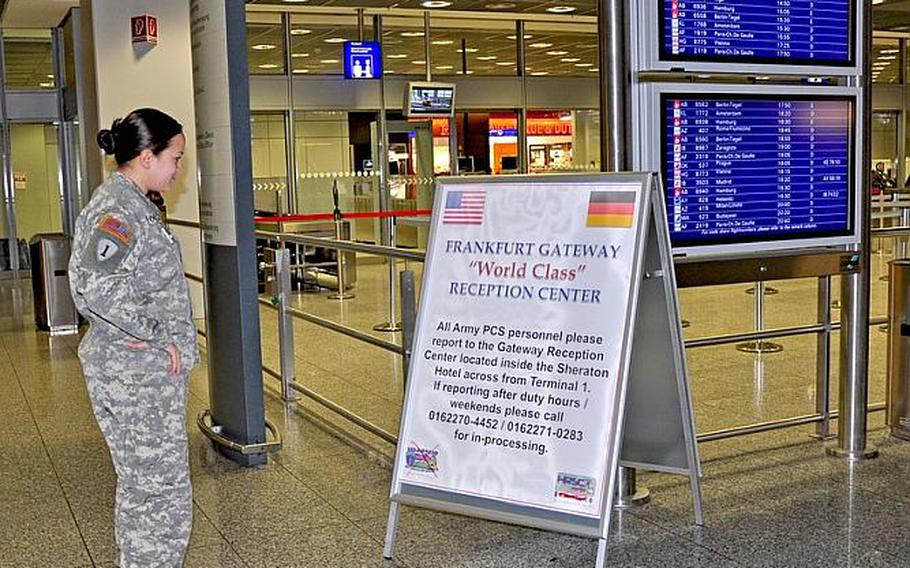 First Lt. Jacqueline Wood checks out one of the Frankfurt Gateway Reception Center signs welcoming newcomers at the Frankfurt Airport. Servicemembers in Europe have been banned from wearing uniforms off base in the wake of the March 2 shooting at the airport. (Karl Weisel (USAG Wiesbaden))

STUTTGART, Germany &mdash; U.S. troops in Europe are now forbidden to wear their uniforms off post &ldquo;to the maximum extent possible,&rdquo; including daily commutes to and from the office, as part of an effort to prevent servicemembers from standing out in a crowd, according to U.S. European Command.

The new policy, which comes three weeks after a deadly shooting outside Frankfurt Airport that left two airmen dead and two badly wounded, takes effect immediately. The EUCOM mandate affects all soldiers, sailors, airmen and Marines serving in the European theater. The rule also takes effect as U.S. forces engage Libya in a high-profile operation being commanded from U.S. Africa Command headquarters in Stuttgart and could bring added attention to U.S. troops here.

&ldquo;The directive specifically forbids the wear of uniforms for travel between duty and domicile, short convenience stops, conduct of physical fitness, travel between installations, and off post messing,&rdquo; according to a EUCOM message broadcast Wednesday on American Forces Network - Europe.

Local commanders will be responsible for enforcing the rule, according to EUCOM, which took the unusual step of establishing an overarching force protection policy. Typically, force protection decisions are made locally, with installations and components setting guidelines.

While units can establish policies more stringent than the EUCOM guidelines, they cannot ease them, according to Capt. Ed Buclatin, EUCOM spokesman.

Nonetheless, there has been some confusion about how practical the policy is. In many communities, base housing and shopping facilities are on separate compounds, often less than a mile apart. Will a change of clothes still be required? The answer is not clear.

U.S. Army Europe&rsquo;s Facebook page reflected some of the confusion, when it posted this message Tuesday: &ldquo;The new policy regarding uniform wear has yet to be finalized and is still in the works. We&rsquo;ll have the full official policy when it is released. Until then, soldiers, consult your supervisors and chain of command.&rdquo;

While the uniform policy still appears to be something of a work in progress, it will surely result in some inconveniences for troops, many of whom have grown accustomed to eating lunch at nearby restaurants, and running daily errands. And no one living off post will drive to or from work in uniform.

&ldquo;You are not supposed to wear your uniform even if you are in your own car,&rdquo; Buclatin said.

In the wake of the Frankfurt shooting, many in the military community questioned why U.S. Air Forces in Europe elected to transport troops in a conspicuous American-style school bus driven by an airman in uniform. For some, the bus made for an easy target. Others argued that servicemembers are easy to identify regardless of the vehicle they drive or whether they are in uniform. A lone gunman intent on targeting Americans is hard to defend against, some contend.

In Stuttgart, home to EUCOM and AFRICOM headquarters, reactions were mixed.

Whether in uniform or not, Lt. Cmdr. Geoff Maasberg said he&rsquo;s pretty easy to identify as American.

&ldquo;I don&rsquo;t think it makes a lot of difference when I am driving my Xterra (an SUV) through town,&rdquo; he said.

&ldquo;People know who all the Americans are from our haircuts and that kind of stuff, but I don&rsquo;t think there is a better way to do it. I think the higher-ups are doing what they need to do, and what they think is right to help us not get shot by some crazy guy with a gun.&rdquo;

Gunnery Sgt. Dennis Dougherty said that changing in and out of uniform when traveling from post to post around the Stuttgart community &ldquo;may be extreme,&rdquo; but thinks the restrictions could make a difference.

With so many servicemembers walking around in uniform off post, &ldquo;I have always thought, &lsquo;What is stopping somebody from attacking them or pulling over a little bit and running them over?&rsquo; &rdquo;

Stars and Stripes reporter Warren Peace contributed to this story.