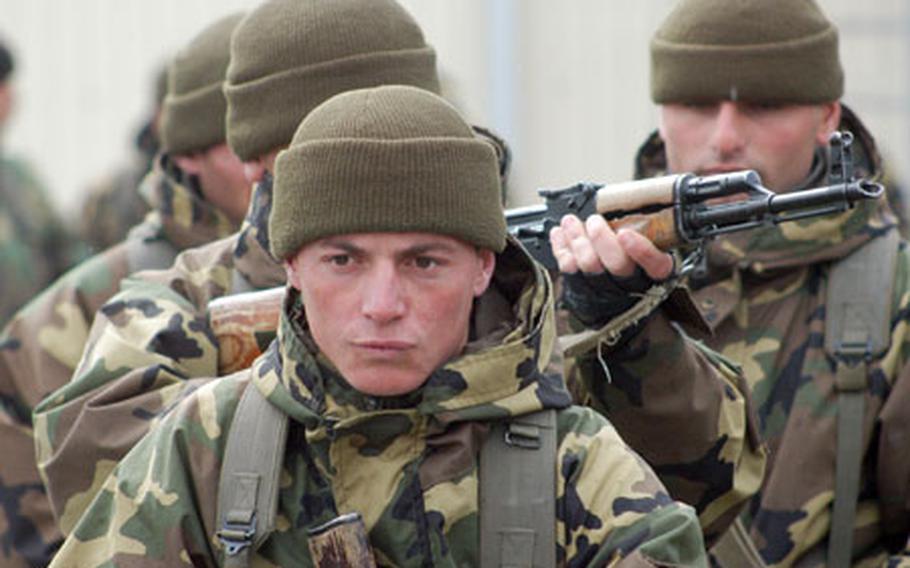 Georgian soldiers prepare to practice room-clearing drills. About 65 U.S. military personnel, mostly soldiers from the Germany-based Joint Multinational Readiness Center, have been in the country of Georgia trying to build an army brigade to NATO and Western standards. (Geoff Ziezulewicz / S&S)

Georgian soldiers prepare to practice room-clearing drills. About 65 U.S. military personnel, mostly soldiers from the Germany-based Joint Multinational Readiness Center, have been in the country of Georgia trying to build an army brigade to NATO and Western standards. (Geoff Ziezulewicz / S&S) 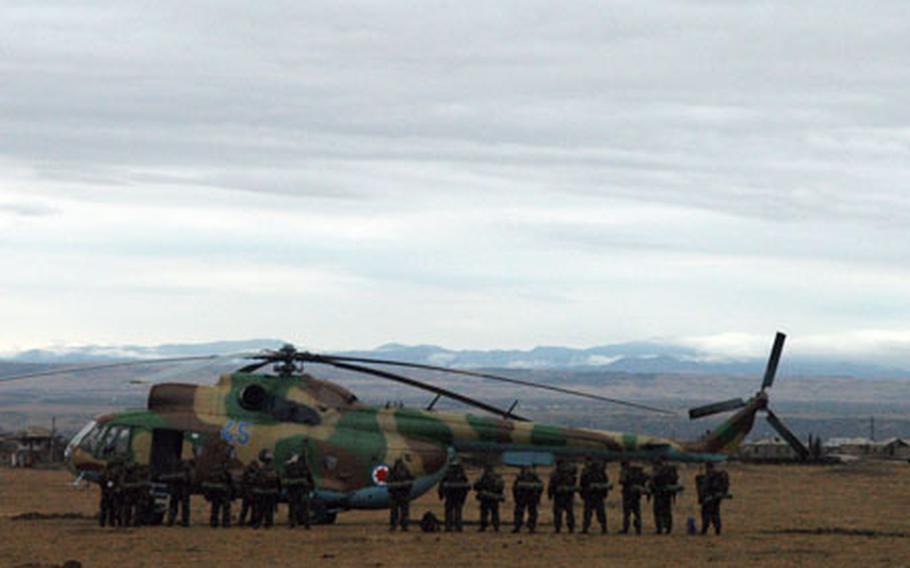 Georgian soldiers line up to board a Soviet-era Mi-8 helicopter for training at a nearby base. (Geoff Ziezulewicz / S&S) 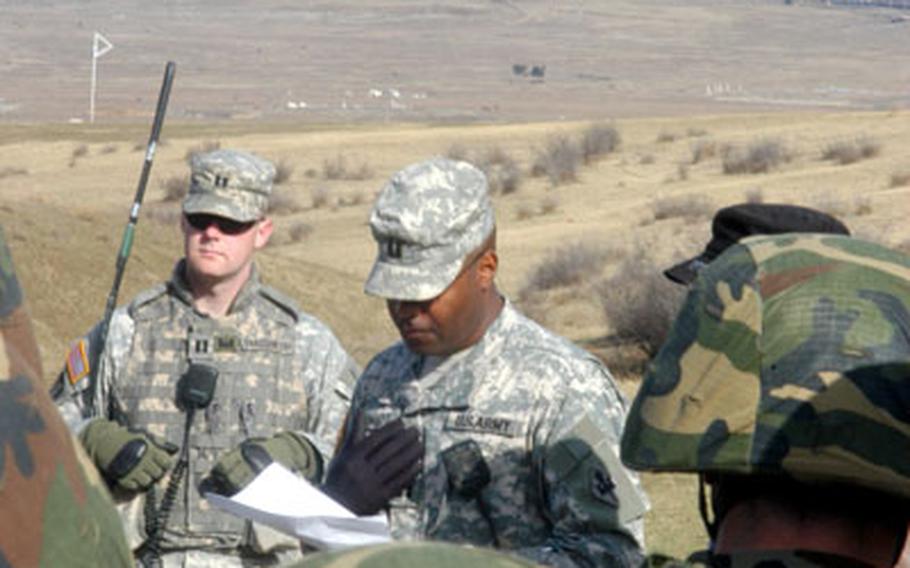 KRTSANISI TRAINING AREA, Georgia &#8212; The explosions would soon start going off, and again, Army Capt. Marlon Ringo reminded the couple hundred Georgian soldiers of the intricacies that come with setting off more than 200 pounds of C4 explosives.

Anybody not following the rules would be kicked off the hill and nearby ravine where the charges would be placed, he said. Stay away, and alert commanders to old, unexploded ordnance in the area. Avoid animals.

&#8220;The only authorized smoking areas are back by those trees,&#8221; said Ringo, with the Fort Leonard Wood, Mo.-based 1st Engineer Brigade.

Before training began, a Georgian woman tried to herd her cattle through the training area, but Georgian soldiers turned her away.

&#8220;She was saying she is going to take her cows through and she doesn&#8217;t care about C4 or something,&#8221; Georgian army Cpl. Jon Geldiashivili said through an interpreter, adding that the woman said she was scared of rival shepherds nearby.

Since last summer, Ringo and about 65 U.S. soldiers, sailors and airmen have been in this small Caucasian country trying to build an army brigade to NATO and Western standards.

With most of the U.S. forces coming from the Germany-based Joint Multinational Readiness Center, the brigade&#8217;s three battalions have been getting 12-week courses on everything from urban operations to first aid and mortar use.

In the process, these U.S. troops are at the forefront of a push by the United States and Georgia&#8217;s pro-West government to bring the three-brigade army into the modern world.

Formally known as Georgia Sustainment and Stability Operations Program II, the $28 million initiative builds on training efforts by the U.S. military that began a few years ago. In its latest incarnation, the training has been whittled down to 12-week cycles for each approximately 540-man battalion.

The first five weeks or so are spent with individualized training in areas such as communications and land navigation.

The $28 million price tag pays for operations and support, but specialized equipment, such as radios, also were provided to the Georgians through the program.

During the sixth week, fire teams are established, followed by squads and larger units.

While Georgia became independent in the 1990s, its army and democratic institutions still are largely embryonic.

Time is inevitably an issue, and some aspects of marksmanship or other training have to be put by the wayside.

&#8220;You only get a couple days to learn how to do this,&#8221; Army 1st Lt. Joshua Sims said as he watched a Georgian company practice on the firing range.

For Army Sgt. Orlando Soto and other noncommissioned officers who make up the majority of the training staff, the language issues have been difficult.

Those soldiers doing the training have inevitably learned Georgian on the fly, Jones said. About 80 &#8220;terps&#8221; are contracted to provide translation for the instructors.

&#8220;One of the biggest challenges is the language,&#8221; Jones said. &#8220;Our guys have done a very good job picking up Georgian commands and instructions.

While the Georgian government wants to modernize its military and join NATO, the training also will prepare the battalions for deployment to Iraq.

And while U.S. instructors do their best, there are some resource shortages that affect the training. For example, not having enough blank rounds to re-create the chaos of combat means U.S. instructors have to look for other ways.

For Georgian Col. Koba Lachkepiani, commander of the Krtsanisi Training Area, the training is a main piece of bringing Georgia more concretely in line with the West and NATO.