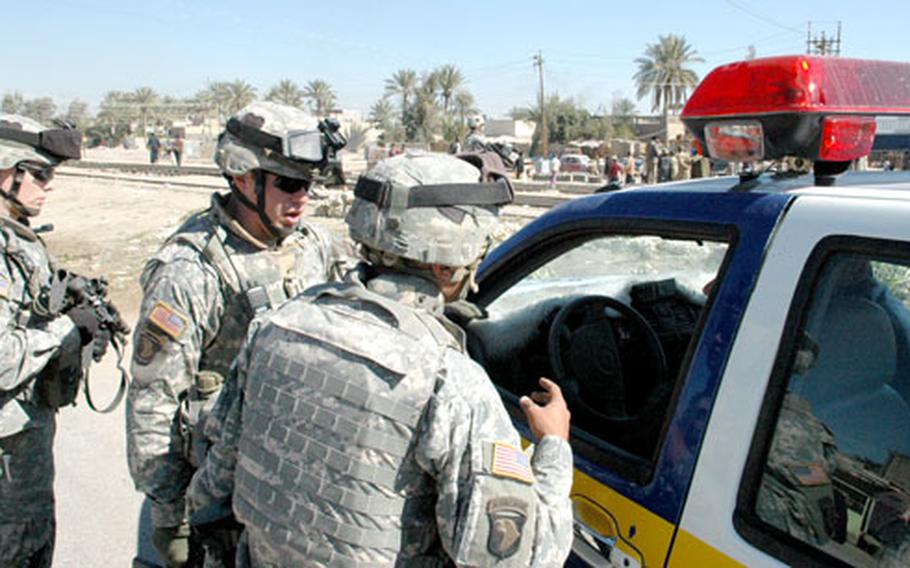 U.S troops instruct Iraqi police officers in Mahmudiya, Iraq, to enforce the nationwide curfew. The police quickly issued orders through a loundspeaker for locals to get off the street. (Andrew Tilghman / S&S)

MAHMUDIYAH, Iraq &#8212; U.S. troops in this restive city south of Baghdad have shifted the focus of their mission dramatically, moving away from fighting insurgents in the outlying farmland and placing a priority on patrolling the urban centers and defusing potential sectarian violence.

As a daytime curfew continued Saturday, the local battle commander spent much of the day reaching out to Sunni and Shiite leaders to gauge the sectarian tensions here in the wake of the bombing of a Shiite mosque in Samara on Tuesday.

Kunk hopes ongoing dialogue among local leaders will help avert a violent confrontation between the local Sunnis, who make up a majority of the residents, and the Shiites, who have been aggressively seizing power in fledgling government offices and security forces.

Meanwhile, soldiers who usually patrol the rural areas looking for teams of insurgents setting roadside bombs have instead spent the day in the city centers bolstering Iraqi security forces.

In the Mahmudiyah city center, 1st Lt. William Shelton found small crowds in the marketplace and stopped an Iraqi police car to remind the police inside to get people off the road and inside their homes in accordance with the national curfew.

&#8220;The Iraqi police need to start telling people to go home, by order of the Iraqi government,&#8221; Shelton told a couple of police officers, who nodded agreement and began speaking into a loudspeaker to disperse the crowd.

For the third time this week, a mortar round fell on a residential neighborhood, a rare occurrence in an area where most attacks are directed against either U.S. troops or Iraqi security forces.

&#8220;I think the insurgents are trying to stir up tensions between Sunnis and Shias,&#8221; said Capt. Jared Bordwell, a company commander who oversees the city of Mahmudiyah and its roughly 200,000 residents.

Mahmudiyah, about 20 miles south of Baghdad, lies on a demographic fault line where the Sunni population of central Iraq begins to give way to the mostly Shiite provinces of the south.

Evidence of sectarian tensions appeared on the wall of one home, where someone scrawled &#8220;Long Life for the Mahdi Militia,&#8221; referring to a prominent Shiite militia group that operates in this area. Many homes in the city displayed black flags, indicating an allegiance to the Mahdi militia.

More than a dozen vans with caskets strapped to their roofs drove south into Mahmudiyah, seizing on an exception to the curfew that permits movement for funerals. U.S. troops fear the caskets may be used for smuggling weapons into the area.

Also on Friday, a single mortar round fell inside the walls of Forward Operating Base Mahmudiyah, detonating inside a tent used as an office for a military transition team. Two soldiers were wounded, neither seriously.