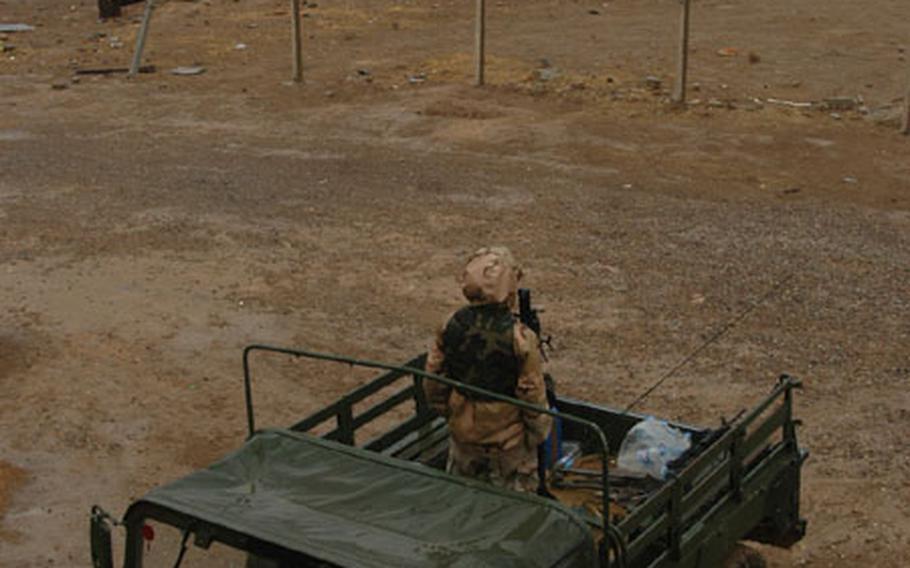 Soldiers look out over the desolate Jaguar South ammunition site. The site — 35 square miles — has no fence, so looters trespass to steal brass from rounds and steal munitions to make bombs. The military estimates it will take two to three years to destroy all the ammunition at the massive site. (Kendra Helmer / S&S)

Soldiers look out over the desolate Jaguar South ammunition site. The site — 35 square miles — has no fence, so looters trespass to steal brass from rounds and steal munitions to make bombs. The military estimates it will take two to three years to destroy all the ammunition at the massive site. (Kendra Helmer / S&S) 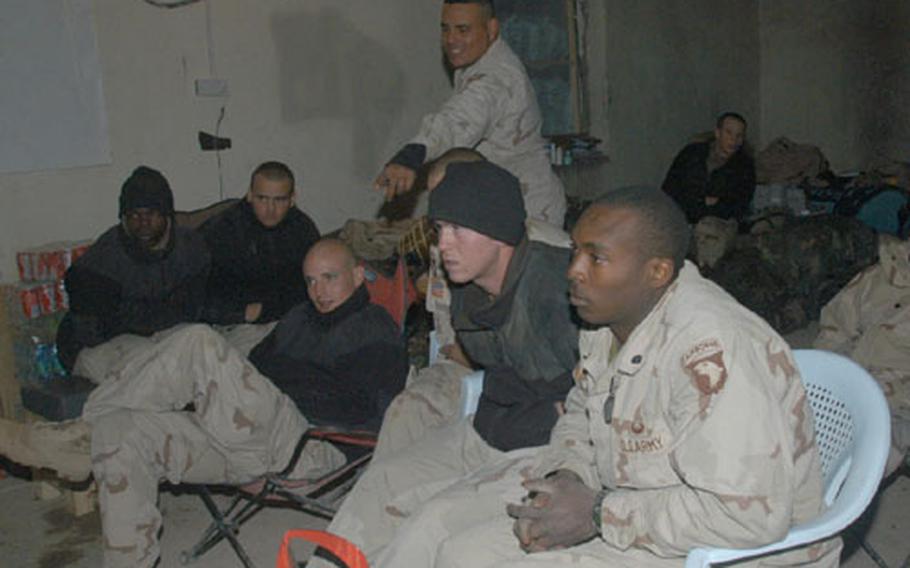 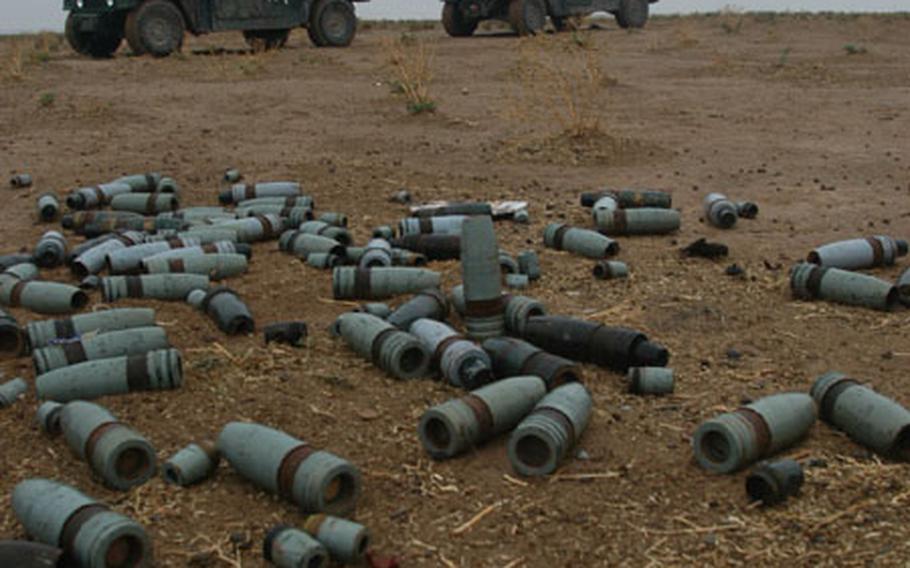 Soldiers with the 2nd Battalion, 320th Field Artillery Regiment, 1st Brigade, 101st Airborne Division, patrol near the village of Hatra, about 70 miles southwest of Mosul. Mortar rounds like these often are found scattered outside the village, near a massive ammunition site known as Objective Jaguar. Looters trespass onto the site and steel munitions, knocking off the mortars’ brass rings to sell. (Kendra Helmer / S&S)

HATRA, Iraq &#8212; The soldiers yelled at the 15 men creeping in a squadlike formation toward the ammunition site.

They fired warning shots over their heads. The suspected criminals kept approaching.

When the men got too close, the soldiers opened fire.

Most of the trespassers to the site are looters trying to steal brass rings off mortar rounds. But some have more sinister intentions: to steal ordnance to use against coalition forces, said Lt. Col. Kevin Felix, commander of the 2nd Battalion, 320th Field Artillery Regiment, 1st Brigade, 101st Airborne Division.

A road splits the area into Jaguar North and Jaguar South.

Jaguar North, about 8 square miles, has about 100 ammunition bunkers measuring 25 feet by 60 feet each. Jaguar South is another animal. Stretching across 35 square miles are hundreds of open bunkers.

Workers are still cataloging the various munitions stored by the Iraqi army there. Felix estimates it will take two to three years to destroy it all.

The battalion has nabbed about 250 looters since it took over the area in June, said Felix, 40, from Parsippany, N.J. Thieves normally target Jaguar South because it is so massive and open, said 1st Sgt. Joseph Jacobs of Battery A.

Looters who are captured are detained at the Qayyarah West airfield. About 90 percent of the time, the looters are poor Iraqis, who are paid 90 cents to $2 per pound for brass at markets in Mosul.

Several, however, have paid with their lives. Rather than taking time to break a round open and pour out the powder, some looters beat the mortars with a sledgehammer to knock off the brass rings.

Sledgehammers and ordnance don&#8217;t mix well. Soldiers estimate 20 to 30 looters have died, though they can&#8217;t be sure because there isn&#8217;t much left to identify after some explosions.

If a looter comes within 300 yards of the site, soldiers are authorized to shoot.

McConnell, along with Chief Warrant Officer Dennis Pelt, 32, a field artillery targeting officer from Kennett, Mo., have lived at Jaguar North since Sept. 1, training Iraqi Civil Defense Corps on security. About 15 U.S. soldiers live at the site in two 15-by-50-foot rooms. The windows and doors are covered with plastic. They stay warm at night by bundling up or huddling around kerosene heaters.

Only men live at the site, though a female medic worked there for a week and a half. The soldiers laughed about how Iraqi men, curious to see a Western woman, lined up saying they needed medical treatment.

A short drive away, about 40 soldiers live at the Al Hatra Hotel, a former Baath Party headquarters, from which they do patrols and man observation points. Though electricity frequently goes out, it has facilities including a pool table, caf&#233; and Internet caf&#233;.

Soldiers roll out of the hotel at sunset to man 10 observation points around the ammunition site overnight.

From a hilltop bunker made of sandbags, he and another soldier scanned their football-sized area for looters. Helping them see the area were two teams of soldiers a couple miles away.

Using a 105 mm howitzer, the teams fired illumination rounds into the night sky, lighting up a 750-meter area for one minute. The howitzer teams communicate via radio with a fire direction team at the hotel, which tells them where to shoot.

The battalion earned the nickname &#8220;Balls of the Eagle&#8221; after seven years in Vietnam. It&#8217;s part of the Fort Campbell, Ky.-based 101st Airborne Division, whose symbol is an eagle.

While the battalion&#8217;s main priority is overseeing the destruction of ordnance that could be used against coalition forces, the soldiers have plenty of other duties to take care of in their 926-square-mile area, which has 200 villages and two major towns.

Soldiers guard the Iraq-Turkey pipeline and escort benzene trucks. Sometimes they patrol the nearby village of Hatra.

The battalion has built or repaired a few dozen schools and spent more than $1 million on local projects, Felix said.

With funds running out to help with local projects, &#8220;I had to find a way to create my own momentum,&#8221; Felix said. So he came up with the ideas to sell brass and steel recovered from the site and bring in tourists to nearby ruins.

The Hatra Brass Recovery Co. will employ 100 Iraqis. Half of the profits will go toward community projects. The other half will pay for the &#8220;Sheik Force,&#8221; a tribe of 75 men hired by Felix to patrol the area.