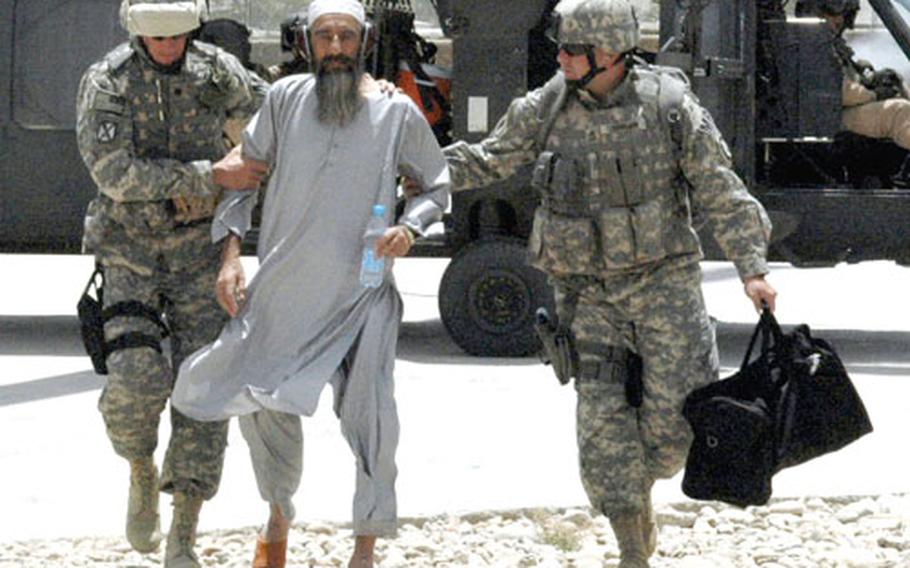 U.S. soldiers escort Rias Mullah Abdul Ali Akundzada out of a helicopter and onto the provincial reconstruction team headquarters in Qalat, Afghanistan. Akundzada was detained by U.S. forces for aiding the Taliban, but released Sunday at the request of other religious leaders from his district. (Leo Shane III / S&S)

FORWARD OPERATING BASE LAGMAN, Afghanistan &#8212; In an effort to strengthen the relationship between area clerics and the new Afghan government, U.S. officials on Sunday released a Shajoy mullah implicated in the death of an Indian engineer in April.

Rias Mullah Abdul Ali Akundzada, who had been in the U.S. detention facility in Bagram since May, was handed over in Qalat to elders and religious leaders from the area, who pledged to keep him away from the Taliban and to work for peace in the region.

U.S. commanders admitted the decision is a risky one, since the only guarantee they have that Akundzada won&#8217;t return to his illegal activities is the word of the holy men.

The decision to turn over Akundzada came after weeks of negotiations between Zabul provincial Gov. Delbarjan Arman, Shajoy leaders and officials from Combined Joint Task Force 76 in Bagram.

Akundzada had been identified by Afghan National Army intelligence as a Taliban sympathizer who provided lodging and information for transient militants.

They also said he helped provide contacts to the Taliban fighters who captured and beheaded an Indian telecommunications engineer working in the region. The attack was part of a campaign of violence to intimidate all Indian workers into leaving the country.

But the elderly mullah also is a respected scholar in his region, and his arrest upset many villagers in the area, locals said.

The other mullahs who vouched for him made similar pledges, saying they would work for peace with the governor and shun Taliban and foreign fighters&#8217; attempts to overthrow the new government.

Arman called the release proof that the new government is listening to its citizens, remains sensitive to the religious importance of the area, and continues to look for peaceful ways to build relationships and rebuild the country.

From the U.S. standpoint, the release also was a chance to show that detainees are treated well. Lt. Col. Frank Sturek, commander of Task Force Warrior, pointed out to the religious leaders that Akundzada was in good health and good spirits upon his release.

After the handover the religious leaders presented a list of other prisoners they hope to have released. U.S. officials said they would review the list, but would not commit to any further releases until they can determine what threat they could pose if set free.